How to get the last word in Destiny 2

How to get the last word in Destiny 2 ⚡⚡⚡ Esports and gaming news, analytics, reviews on WePlay! The latest news on WePlay!

Destiny 2 is an online multiplayer FPS game which is available on PlayStation 4, Xbox One and Windows. Similar to the first Destiny, the activities here are divided into two - player vs enemy and player vs player game types. All this makes Destiny 2 a pretty interesting game to play.

Having said that, The Last Word is one of the most exotic weapons in the game. Not only is it one of the rarest, but it also has pretty cool effects such as auto firing. The lore behind this weapon is very long but to make a long story short, The Last Word ends up in the hands of Shin Malphurs whos goal is to kill Yore.

What does The Last Word provide you with?

So, How to get The Last Word? 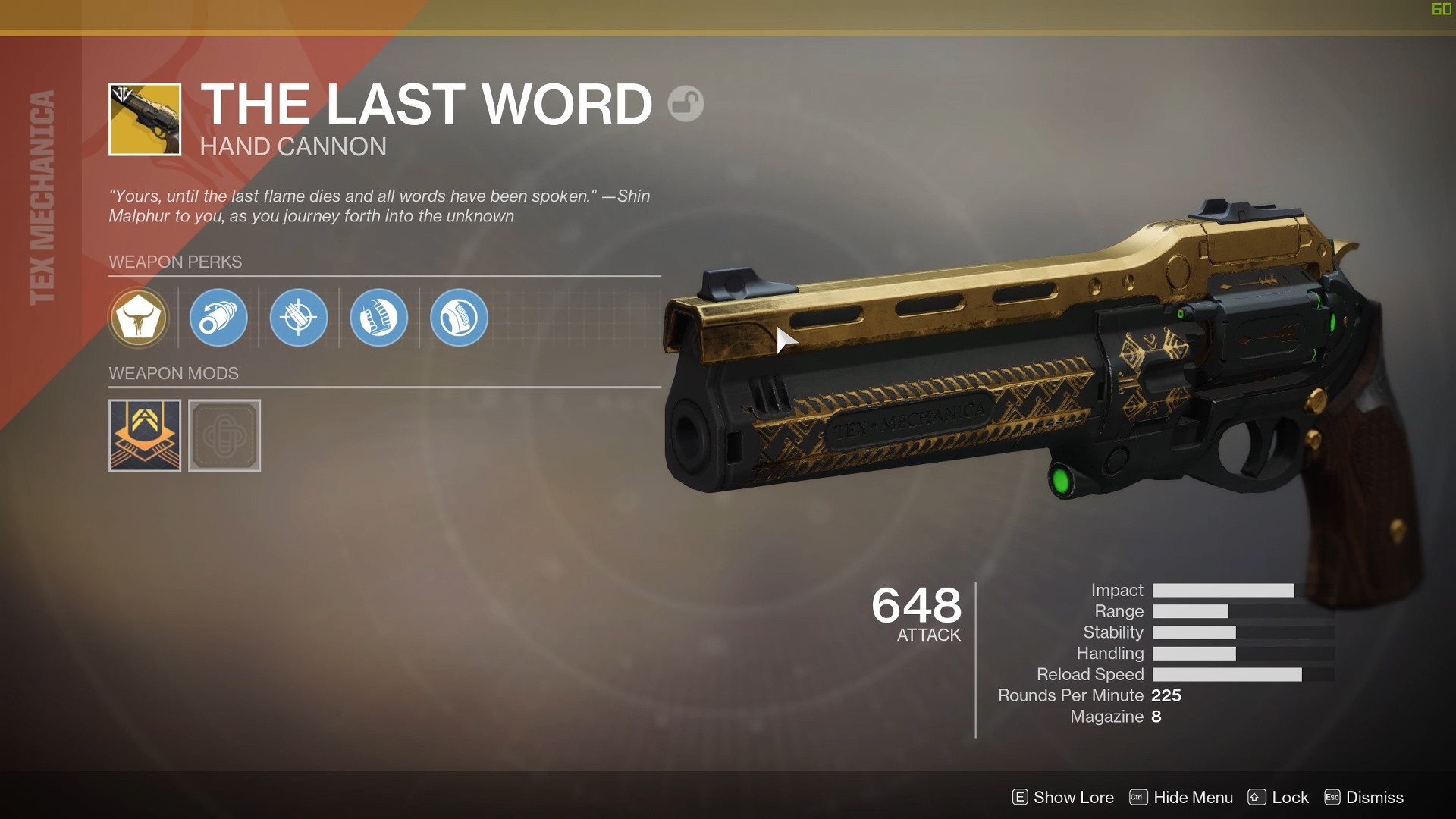 In order to begin, you have to visit the Drifter. He is the one who will provide you with the priceless quest to start your path for The Last Word. Once you do that, just follow the steps below.

The first step towards your reward is related to the Hive. You have to defeat Hive with Solar Damage, collect Hive tablets and defeat Hive Bosses. Even though this might seem like a pretty straightforward thing to do, there are many ways in which you can do it. Probably one of the best ones is to go to Mars and check if people are doing an Escalated Protocol. Should you get into one on a timely latter, finishing this will take you just a couple of minutes.

As soon as you are ready, go back to the Drifter because he will provide you with the second part of the quest. This challenge is connected to killing GUardians in the Crucible and to feed the artefact their Light. Unlike the previous quest, there is no specific weapon that you must use here. That’s why you should just get your strongest Crucible weapon.

Having said that, you need to play very carefully because if you die, you will lose a certain percentage from your quest progress. As far as I know, you get around 3% per kill, 1% per assist and -2% per death. Basically, just try to survive and do not die. Even if you can’t kill anyone, you can still finish the quest just by assisting.

This is probably the easiest quest on your way to The Last Word. In order to finish it, you must do a mission on Titan. What’s more, this mission only needs around 500 power level to finish and it ends in a boss fight.

Similar to step one, there are several things that you must do in order to finish this quest. First, you will need to earn 50 tokens from Hive precious skill, second - complete 3 heroic Witches Ritual Events. Once you do that, you will need to kill 15 Lost Sector Escapees and earn 25 Blood for Blood or Best Served Cold Medals.

The 25 medal part is easily obtainable once you go to the Crucible. In fact, there are many ways in which you can obtain them. You can either just try to kill as many people as possible or play “nasty” and just DoT your enemies until they die. In both cases, getting the medal should not really be that hard.

This is the mission which will grant you The Last Word so needless to say, it is a very important one.

This challenge will take you on the Tangled Shore and it needs 500 Power Levels. Apart from that, it is important to know that some people are experiencing a lot of bugs in this quest. The issues itself is not 100% confirmed but it appears that the quest might bug once you start shooting against the wizards from too far away. If you do not want to take any chances here, just go closer to them and you should be fine.

As soon as you finish with that fight, you will have to face Enkaar. This second phase of the quest has three parts in it. First, you will need to activate the so-called “steady” effect and then pick up The Last Word. Once you do that, you will have to shoot Enkaar’s weapon from his hand.

Immediately after you do this, there are going to be a lot of spawning adds that you have to deal with. After killing them, the second part of this phase begins and this time, there will be two Enkaars. Whatever you do, remember that you MUST shoot the Enkaars ion the same order as they appear. If you manage to do it, there will be more “trash” (as people refer to the adds in WoW) that you need to deal with.

Finally, there are going to be three copies of Enkaar which you need to shoot int the right order again. If you manage to do that, you get to keep The Last Word.