Here's why Faker is the model pro gamer

The League of Legends maverick, Lee “Faker” Sang-hyeok recently had an interview with The Chosun Ilbo, a Korean news site [thanks sailorpetite]. In it he answers questions that delve into his personal life and beliefs.

Faker came to fame in 2013 when he joined SK Telecom and by the end of their first tournament, he was already a contender for best mid laner among fans. That year they would go on to win the League of Legends Season 3 World Championship.

In the interview he talks about the rigors of being a professional esports player. From getting only 30 days off a year to having the mental fortitude to focus on success. He admits that his form is nowhere near his past performance, but he's actively working to improve and excel at the game.

When asked if he would let his children pursue esports careers, he said he would. Faker became a pro player at the age of 16 in Korea at a time when esports was generally frowned upon. Yet, his parents supported his decision and he hopes to do the same for his own kids, so long as they possess the talent and temperament required to succeed. 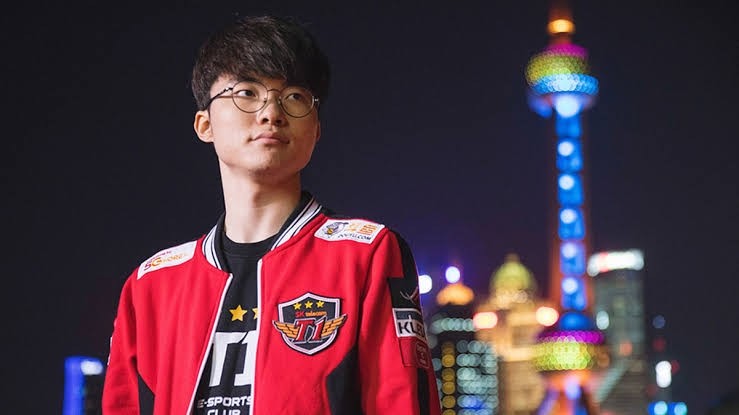 For a pro player competing internationally while attending school, in his opinion, is near impossible due to all the traveling, practice and matches. So if his children don't have what it takes, he would advise them to go to school instead, where they can create multiple opportunities for their future.

Regarding his position as a role model, he says, "Many young people look up to me so I have to look gentle and well-mannered." Understanding the influence he has over his fellow youth, he's tried his best to avoid doing "bad things," focusing instead on being honest, nice and even minding his language. Academically, he says, "I was quite good at middle school. Maybe the top 10%? But when I got to high school, it fell top 20~30%"

For stress relief Faker reads books and meditates. "I'm reading 'Game theory' at the moment, I empathize that the game always has to be changing." He proudly added that he neither drinks nor smokes.

Coming from humble beginnings, Faker never really considered his family poor. He claims he's always been good with money, even back then, so he got to play games whenever he liked. Now he spends, "$200 - $300 dollars per month, I'm not a shopping person. I always save, but when I have a meal with my friends, I have to pay, so around $200-$300." That's a very tight budget for someone that makes as much as he does.

Faker is really the unofficial poster boy for an esports industry that produces talented athletes with sharp minds and the ability to inspire millions. His cool demeanour and constant desire to do good makes him the ideal model for pro gamers to emulate.