GSL vs. the World Day 1 and Day 2 recap & reactions

GSL vs. the World Day 1 and Day 2 recap & reactions ⚡⚡⚡ Esports and gaming news, analytics, reviews on WePlay! The latest news on WePlay!

The first round of 2019 GSL vs. the World held a ton of surprises, especially in the first couple of matches. Series between Elazer and Dark started with a failed all-in when Dark showed his Spine Crawler spawning at Elazer’s base. Throughout the matches the Korean player looked very strong with his early aggression and clutch mid-game timings. The Polish managed to win capitalizing on Dark’s blunder in the first game, an early roach push mid-series and superior late-game army control in the rubber-match.

The surprises didn’t end there. In the match between Time and soO, the Chinese player executed an impressive 3-0 sweep, crushing his Korean opponent with various TvZ styles.

Stats destroyed one of the greatest potential storylines of the tournament by crushing Maru 3-0. Now that the Terran is out of the picture, we might not see the Maru vs Serral matchup any time soon. Stats, on the other hand, might become a back-to-back champion of an interregional event.

Most of the other games went more or less as expected. 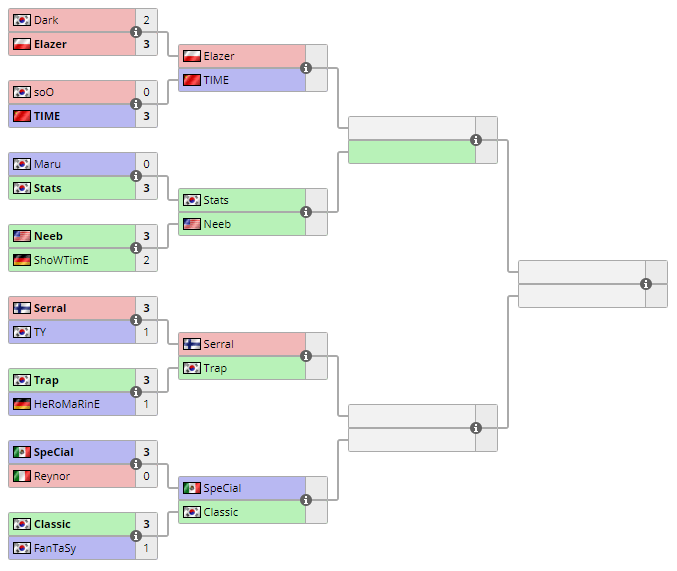 Tomorrow, GSL vs the World returns with an extended day playing the Ro8 and Ro4 matches. The Grand Finals will be taking place on Sunday ahead of the team match.