Google and FACEIT take on in-game toxicity together

Google and FACEIT take on in-game toxicity together ⚡⚡⚡ Esports and gaming news, analytics, reviews on WePlay! The latest news on WePlay!

FACEIT has teamed up with Google to combat toxicity in video games. Together they have developed an artificial intelligence system that will scan in-game chat for toxic text.

Named Minerva and developed by Alphabet's Jigsaw Labs, the AI will use machine learning to scan, identify and analyse any breach discovered in thousands of chat messages. Minerva does not need any human interaction and will ban repeat offenders.

Counter Strike: Global Offensive and Dota 2 are considered the two games with the biggest toxicity problems. Toxicity is essentially any rude behaviour exhibited by players and often revolve around racism, sexism and homophobia.

Being a platform for matchmaking in competitive video games, this is FACEIT's attempt at making the gaming community a safer place. Jigsaw Labs is a tech incubator that applies technological solutions to global challenges, making toxicity in games a perfect issue to tackle.

Since August they've analysed 200,000,000 chat texts and flagged 7,000,000 toxic content. Minerva has issued 90,000 warnings and 20,000 bans for verbal abuse and spam. FACEIT has seen a 20% decline in toxicity since the implementation of the new system. To curb smurfs and booster accounts, FACEIT has also implemented a phone number verification process imposed on players suspected of committing any of these offences. 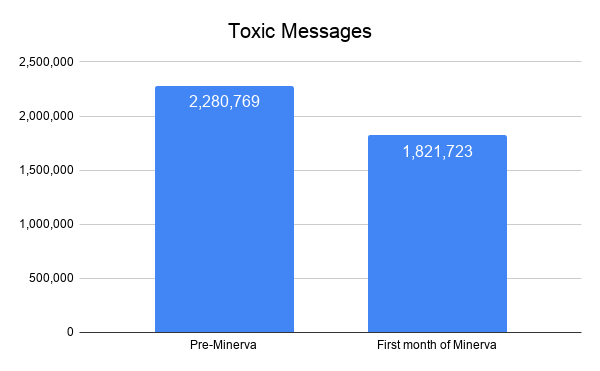 That's a good sign that Minerva works and brings us a lot closer to non-toxic environments across numerous gaming communities.