The last Major of the current Dota 2 Pro Circuit 2018/19 – EPICENTER Major – has concluded. The professional tournament schedule has ended in the wake of the main Dota 2 esports event of the year, and the teams can no longer earn valuable DPC points.

The ongoing seasonal standoff is over, and we now face the list of lucky crews who managed to pave their way towards direct invites to The International 2019. Strictly speaking, the exact line-up of teams was known before – right after Alliance played against Gambit Esports in the third round of the EPICENTER’s lower bracket.

Unfortunately for the fans from the CIS region, Gambit wasn’t able to defeat the Swedish team, and as a result, the Russian crew wasn’t directly invited to TI9 – while Alliance earned the last place of the current DPC rating.

The following results didn’t affect the whole picture but rather allowed the chosen teams to reshuffle a bit in the top-12 list. Regardless of the exact ranking position, the dozen of the best world crews are guaranteed to perform at the event.

What’s the difference of going to The International holding the 12th and the 1st place anyway? The teams took their places according to the points earned in the season:

What does this rating tell us? Is it possible to predict the potential results of each team at The International 2019? Well, why the hell not, as last year, we were dealing with a pretty similar DPC format (yet the system did have a few differences). It allows us to compare the places the teams took during the previous season with their subsequent results at TI8.

Here’s a graph we’ve drawn using the mouse, the visual editor, the Celtic grimoire, the tooth of Conor McGregor, the script for Cyberpunk 2077, the new medallion of Geralt straight from Netflix, the personal presence of Hideo Kojima, and two hours of torment and suffering: 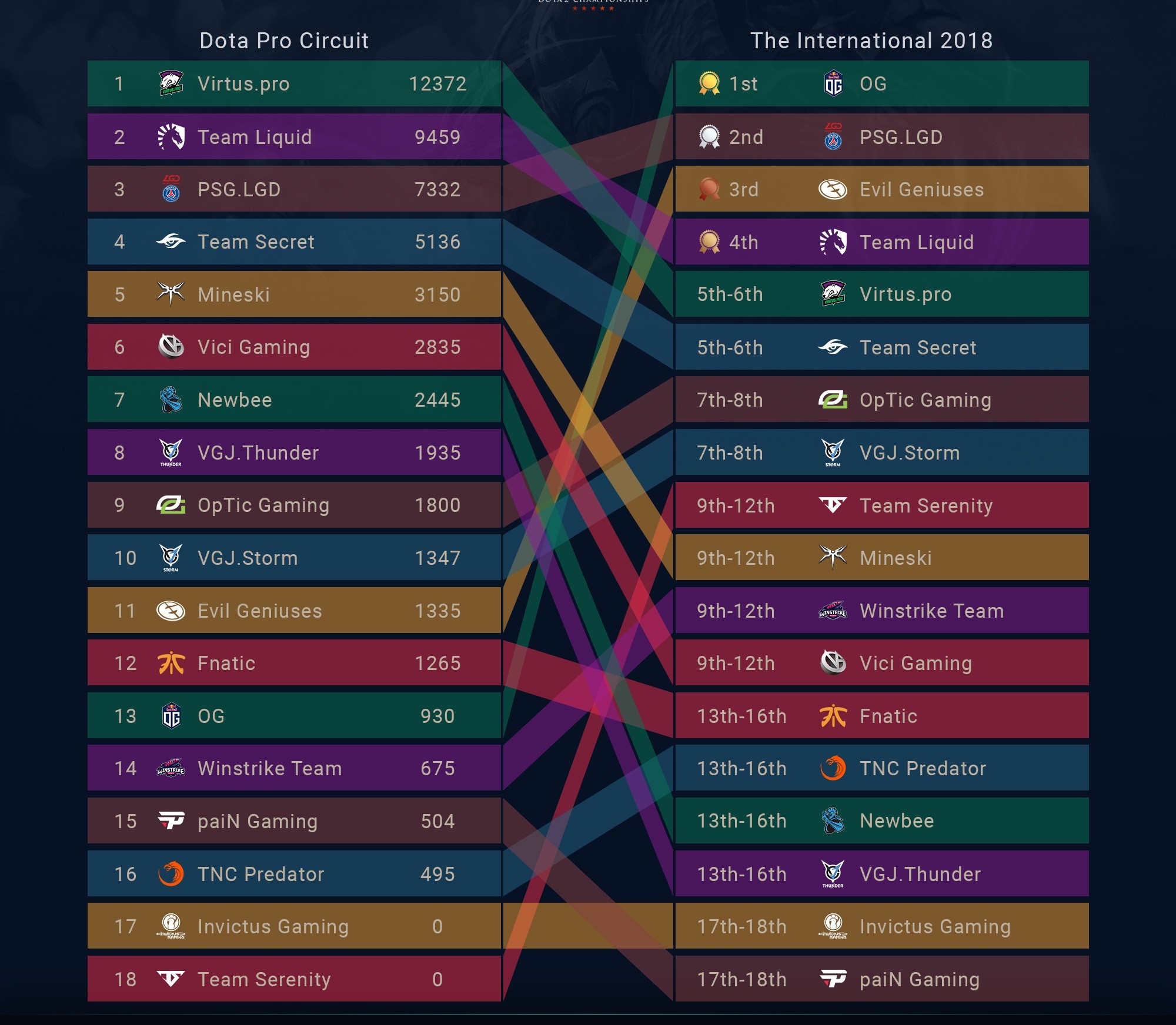 If you take a closer look at how the teams’ places correspond with each other, you’ll be able to hit the same three conclusions we now have. The following information might encourage some of the teams going to TI9 while other ones could feel a bit frustrated over it.

First, we need to make an important clarification. In 2018, direct invites were sent to eight teams – not twelve, as in 2019. The rest of the contenders were determined by their performance during the qualifying rounds. In other words, a single year ago the top-8 teams of Dota Pro Circuit were the indisputably best ones in professional competitive Dota 2.

With that in mind, their results at TI8 were ironically lower than expected. Seven teams out of eight significantly dropped down in terms of the places they were occupying. Particular crews performed so badly that they managed to lose seven positions – and even more.

Well, no one should fool themselves while thinking that a high DPC rank would guarantee excellent performance at TI – but that’s pretty damn obvious nonetheless. And it was obvious until seven out of eight teams proved the rule we’ve put in the very title of our article. Their good DPC rating resulted in fail at The International. Amazing!

The only team able to avoid the “curse” was PSG.LGD – the Chinese crew, occupying the 3rd place in the DPC rating, managed to advance higher and hit the Grand finals. The team was a step away from becoming the champion of TI – but that’s a different story, which we’ve already covered.

Conclusion #2. The higher you climb, the longer you fall

Let’s elaborate further and reveal the exact reshuffles of the teams in terms of positions. Mostly, these were downfalls. Here’s another indicator that clearly shows that there’s no direct connection between the DPC rating and places at TI. On average, the teams with negative results dropped ten positions in the overall standings. Virtus.pro fell from the 1st place in the DPC rating to the 5th at TI; Mineski – from the 5th to the 12th; Newbee – from the 7th to the 16th.

Interestingly, the teams with positive results managed to advance no more than five positions higher. Winstrike Team took the 9th place after the 14th; VGJ.Storm jumped up to the 8th from the 10th; OpTic Gaming moved to the 7th position from the 9th.

There’re just three teams that didn’t follow the general trend of TI8. Team Serenity, occupying the last place of the Dota Pro Circuit rating, hit the 9th-12th place; Evil Geniuses took the Bronze of the tournament while being the 11th team of the DPC 2018/19 season; and, of course, the triumphant OG – the team won TI8 after starting at the 13th lucky place of the DPC rating.

Conclusion #3. Being a “dark horse” is great

Seven teams out of ten who didn’t get a place in the prestigious top-8 rankings of DPC improved their results. Team Serenity, TNC Predator, Winstrike Team, VCJ.Storm, OpTic Gaming, Evil Geniuses, and, of course, OG resulted in occupying higher places at The International 2018 than in the DPC rating.

The “dark horses” benefitted from tasting the most relevant meta while performing at the qualifiers, they had a great training thanks to the high competition, and overall, these teams were prepared significantly better for the challenges of TI8 than the ones with direct invites. All in all, a dozen of additional qualifying matches right before the main event had a highly positive effect on the performance of the crews.

Moreover, the “dark horses” served as a clear example and an object lesson in terms of proving that ratings and rankings are not necessarily relevant all the time. The true challenge of fighting to win is the best demonstration who’s better at the game for the time being.

Those who are about to enter the open qualifiers for TI9 today should learn something from that.

In general, we found out that the teams who fought their right to perform at The International through the qualifiers – both regional and open ones – considerably improved their quality of plays and results in comparison to the Dota Pro Circuit rating.

It was even more obvious when comparing those teams to the top-8 of “favourites.”

We are not by any means depreciate their achievements – the four teams kept the prestigious 2nd-6th places while letting in only OG with their victory and EG with the 3rd place. The other four teams of the DPC top-8 were “successfully” taken down by the underdogs.

Despite the fact that we’ve only examined a single year and The International 2019 might take a completely different route, there’re fairly troubling details. The latest results of Evil Geniuses (DPC 4th place) and Fnatic (DPC 7th place) suggest that the emerging trend is rather viable.

Is the history going to repeat itself? We’ll know for sure in a month.