The titanic match between G2 Esports and SK Telecom T1 at the League of Legends World Championship Semifinals last weekend was one to remember. Not only did the Semifinal match rock, but it also crushed Fortnite World Cup viewership records.

According to numbers provided by Esports Charts, the match secured the highest peak concurrent viewers in any esports match. Excluding China numbers, the concurrent viewership was just short of 4 million across YouTube and Twitch. The Fortnite World Cup held the previous record with a peak of 2.3 million viewers. The event was when Sentinels’ player Kyle "Bugha" Giersdorf won the Solo World Cup at Arthur Ashe Stadium, New York, on July 28, 2019.

That’s not all though. The LoL World Championship also set a new record for the most-watched hours across an entire esports tournament. With the Grand Finals still left to be played this weekend, it's already gained125 hours. The closest esports tournament is Dota 2’s The International 2019, with over 88 million hours watched. The Fortnite World Cup Finals doesn’t even come close in this regard as it only achieved 22 million hours.

The G2 vs SKT match had a lot going for it though. Both teams have massive fanbases, and the LoL World Championship is the most-watched esports event. The series occurred at a time that would be convenient for fans residing in several different timezones. Other matches during the event saw substantial viewership numbers too, like SKT vs Splyce and G2 vs DAMWON. 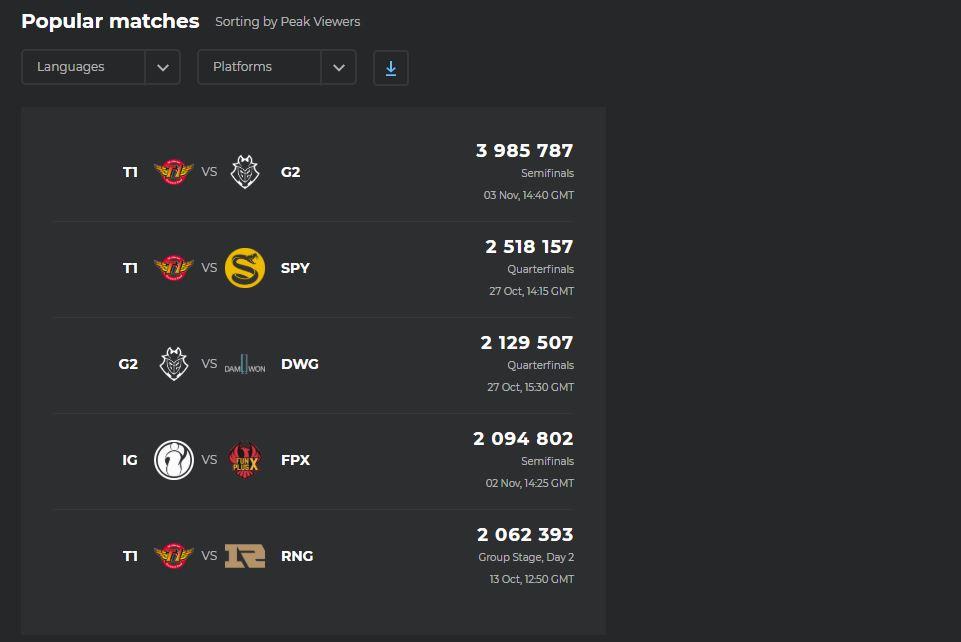 G2 will now face FunPlus Phoenix on November 10 at Accorhotels Arena, Paris, France. With all of Europe’s hopes on their back and the possibility of winning a Grand Slam this season, the viewership for this match could be even higher.