For the second year in a row, teams from China and Europe meet in the finals of the main League of Legends tournament. Last year, Invictus Gaming crashed the weak resistance from Fnatic and deservedly won with a score of 3:0. But despite the obvious outcome, we saw a wonderful and historical confrontation.

This year, the European fans had very high expectations: the incredibly strong G2 Esports were the continent's main representatives — they've won both regional splits and even grabbed the international crown of the MSI championship. They've got even more confidence before the final because on their way to the decisive match G2 met not just the weak whipping boys but some of the best teams in the world: DAMWON Gaming and SKT T1. G2 passed them with ease. But the final match was Europe vs China: the strongest team of the Celestial Empire, FunPlus Phoenix was the second participant.

The Phoenixes' origins are quite fascinating: they were an unremarkable Chinese championship middle-table team last season. Somehow they managed to get into the summer playoffs but immediately lost to JD Gaming and ended the year with a negative record of wins and losses. GimGoon, Lwx and Crisp watched Invictus Gaming win the title of the best team in the world from their homes. In the preseason, FPX's management made three fatal changes: Doinb the Veteran was signed from Rogue Warriors — he wanted to end his career soon. However, his wife Umi convinced him to continue playing; a decision that has become crucial for the player and the whole team. An unknown young jungler Tian came from Suning, and so an ex-WarHorse coach who was transferred from the Taiwanese Flash Wolves had to turn this strange stack of players into a team.

In 2019, FunPlus Phoenix started breaking everything that got on their way. First place in the regular split was followed by an unfortunate defeat in the playoffs of the spring split, which only irritated the players: in summer they didn't leave anyone a chance and went to the World Cup as the best Chinese team.

Before the start of the Mundial, all Western analysts unanimously agreed that G2 plays incredibly smart and innovative. The team's pool had a large number of characters that could have been taken in two, three, and sometimes four positions. Their game was built through controlled aggression, which in mid-game develops into a stifling macro-game with split push. Such a strategy brought G2 two consecutive unconditional championships in Europe and broke the resistance of the world's leading teams at MSI. This approach was supposed to bring the Samurai World Champion title. However, few in the West suspected that the Chinese G2 was going to the World Cup also.

One of G2's distinguishing features is its self-reliance and superiority. As soon as the guys defeated SKT T1 for the second time this season, they began to use half-joky trash talks to FPX. At first, the representatives of the European champion said that the real final was in the semifinals against Faker and Co., and they will show the "Phoenixes" their place in the final. FunPlus Phoenix did not remain in debt: in an interview, Doinb said that he believes that G2 were lucky with rivals and they would not go further against FPX or iG.

Moreover, a former FPX rival — Nemesis from Fnatic — had his word too. The Slovenian named Doinb one of the worst midders of the tournament.

The former leader, and now G2's botlaner Perkz, who said that Doinb is not even the second-best mid-lane player of the final, added some fuel to the fire.

Instead of saying anything, Doinb sent the Croatian superstar a tweet with his dance:

In a serious interview before the final, FPX's representatives said one thing: they really want to prove that they are good players and deserve to participate in the title match. Before the decisive match, each of the team's players had played only 15 international matches. Doinb cited his promise to wife: "I will show you Paris" as his main motivation for this tournament.

Many stars were invited to perform themed parties at the opening ceremony of the League of Legends World Cup finals in Paris.

The first performance was for Valerie Broussard with the song Awaken...

And here is an animated clip featuring the characters of the game:

The opening ceremony was completed by Cailin Russo and Chrissy Costanza with the theme song of the World Cup — Phoenix. Ironically.

The main question before the final match was who will adapt best: can G2 be able to defeat its copy, and how the players are commensurate with each other on their lanes. The answer was given quickly enough: no, they can't.

FunPlus Phoenix literally crashed their rival: Tian showed an incredible level of play as Lee Sin and was always in the right place at the right time. The junglers have never shown such a level of play in the finals before. In the first game, he had several moments worthy of a selection to the tournament's Top 10 Compilation.

A total outclassing in the four out of five roles in all three games is a complete surprise. FPX's toplaner GimGoon constantly played against Wunder with the champions without advantage on the lane but his patience was rewarded every time, as Tian’s clever ganks and Doinb's priority push created control zones where it was difficult and dangerous for G2 players to enter. The Europeans had nothing to answer to the constant successful ganks. In the first match, it felt like G2 outwitted themselves with Pyke's pick to go to mid: a character who is picked to the middle lane in order to push and go to help the jungler or other lanes behaved as if he was chained to his own tower and as a result made much less useful rotations than Doinb's Nautilus.

Even the favorite Yasuo-Gragas botlane flex didn't help the Europeans: Lwx and Crisp simply avoided the fights that could give G2 an all-in opportunity.

Analysts unanimously called Perkz the best botlaner of the tournament, but Lwx's performance forced absolutely everyone to reconsider this statement. The Chinese did not just play well: he played perfectly. For the first time in the history of League of Legends World Cup finals, the player has never died in all matches. Lwx's final score was 21/0/14.

It is significant that not a single time during the whole match did the theory that G2 could win this game appear. Wunder and Jankos simply didn't show the proper level, Caps was neutralized by Doinb's excellent game, and botlane was not able to get a sufficient advantage in any of the games. Surprisingly, FPX's victory was so total that even Fnatic seemed to be closer to the title last year than G2 this time.

The second place for two years in a row is, of course, extremely annoying for Europe. Nevertheless, it is possible to make a valid and reasoned claim that at the moment LEC is the best region in the world. Joke aside: all the three teams were able to get into the playoffs stage. Splyce fought the best team of Korea, G2 defeated them and advanced to the finals, while Fnatic lost to the future World Champion.

However, in fact, China is the best region for the second year in a row. The largest salaries are paid in LPL, the best infrastructure of the game is developed there also and the country has the largest pool of rising stars, as long as the leading teams become world champions.

Next year, the final stage of the World Cup will be held in China too: the city of Shanghai took over from Paris.

Doinb, Korea-born, speaks on pure Mandarin in an interview and is not even a legionnaire: he started his professional career there. Immediately after the match, he threw off his headphones and in a frantic joy began to jump and hug his teammates. 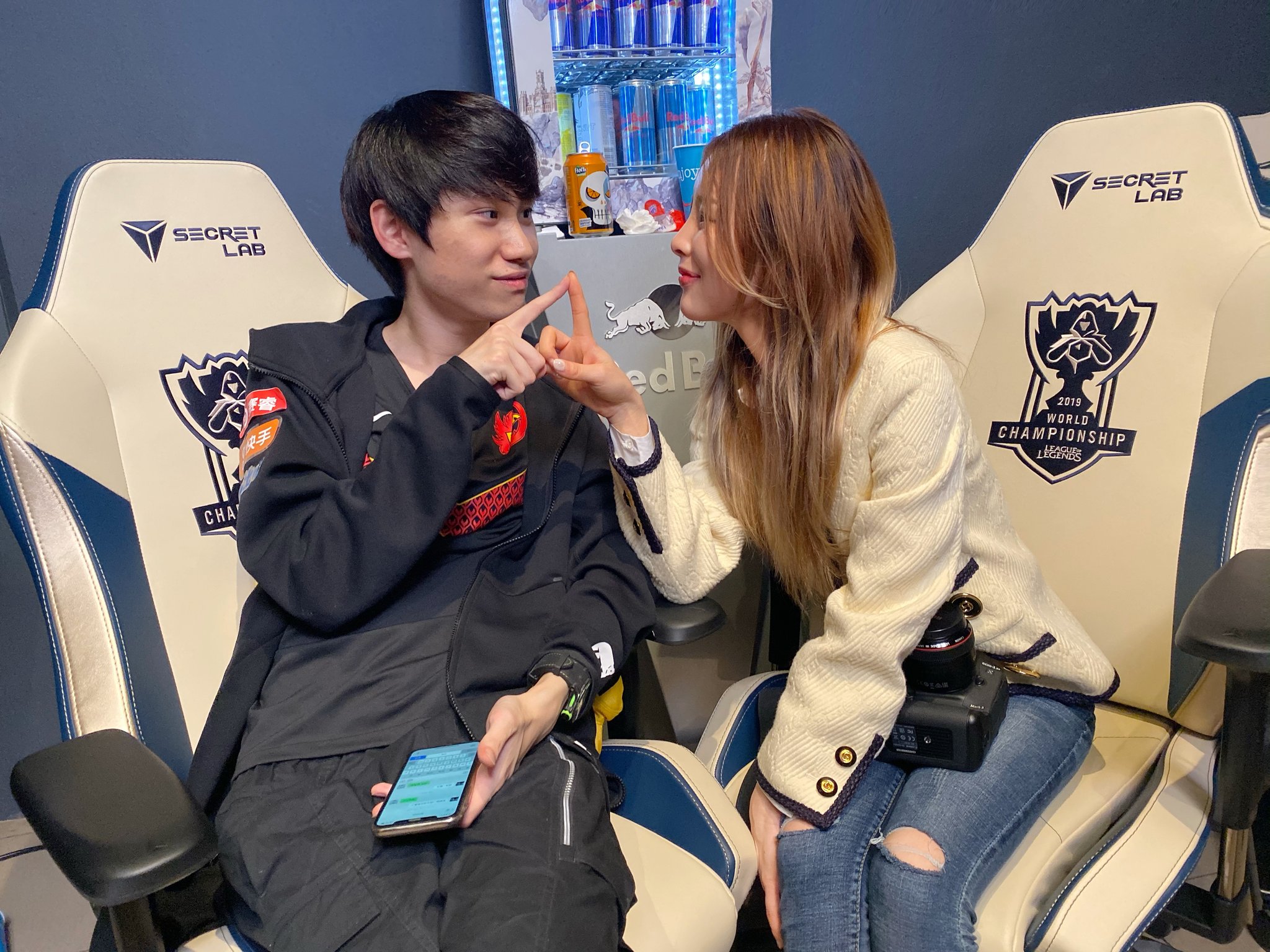 In the post-match interview, he did not forget to heartily thank his wife, who kindled fire and hunger for victories in him. The player who wanted to end his career, who was considered the average mid-laner in the League of Giants, who had never before played in the World Cup, rose from the ashes like a phoenix. As well as his entire team.

The theme song of the World Cup turned out to be prophetic: