Final Fantasy 15 EXP Farming - How to get experience and level up fast - Leveling Guide ⚡⚡⚡ Esports and gaming news, analytics, reviews on WePlay! The latest news on WePlay!

Final Fantasy XV is one of the most interesting and loved action role-playing game which got released for Windows in 2018. Having said that, the game features an open world environment and action-based battle system, which definitely makes it very competitive. In addition to that, there are various quick-switching weapons, elemental magic and other amazing features such as vehicle travel and camping.

The game itself takes place in the fiction world of Eos. The entire world is dominated by the empire of Niflheim, with the exception of the capital of Lucis. In order to fight against this empire, you need to get as fast to the maximum level as possible. Having said that, accumulating EXP in Final Fantasy XV is one of the most important things to do. Not only are you going to gain new abilities and boosts but you will also increase the stats of your party, which will allow them to fight against stronger enemies, deal more damage and survive longer.

Generally speaking, the game itself has a decent EXP gain mechanism which allows you to level up fairly fast. However, there are also many other ways to increase that process easier.

Resting in a hotel, motel or a caravan 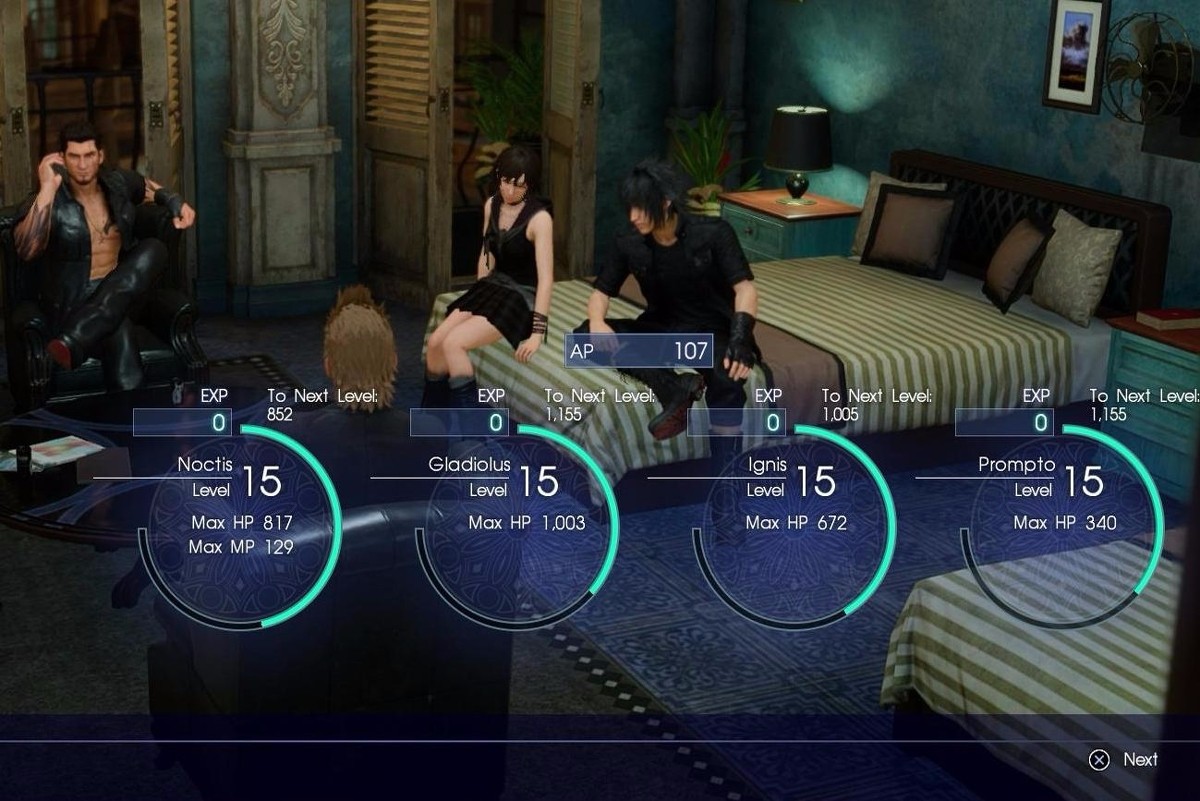 Apart from the traditional quests, there are many other ways in which you can get some EXP. One of the most effective ones is to rest in a hotel for a hefty multiplayer.

Similar to many other MMO games out there, resting will result in getting more exp in general. In fact, when you sleep in FFXV, you can allow Ignio to make his special meals which will increase the rate at which you gain experience, In addition to that, every single objective that provides EXP will also have its value increased when you finish this. This definitely makes sleeping one of the easiest and most popular ways to boost your leveling process.

The bonus that you get from sleeping depends entirely on where you actually sleep. The best locations are the various luxury hotels that you can find but as you are probably aware by now, they cost a small fortune so be sure to have enough Gli before you go there. However, if you do manage to get enough money, it is definitely worth it because you can get up to three times more experience.

On the other hand, you can also try to sleep in caravans which are a lot cheaper than hotels. Of course, the exp boost there is just a little bit over 1.2 but considering the fact that you pay only around 30 Gli for it, it is still a bargain. Having said that, still, the best value of money in FFXV is a Motel because you can sleep there for around 300 Gli, they are very easy to find across the world.  In fact, the best thing to do is just go to the motels during the early stages of the game. By doing this, you will be able to save up a lot of bonuses and once you hit the late game, save up enough GLi and go on to do the various quests and missions which provide a tremendous amount of EXP. After that, go to the luxury hotel for the best results. That's why it is a good idea to save up the bests quests for last - you will get a lot more out of them.

If you follow everything mentioned below, you will be able to get to a very high level. Having said that, it should definitely be enough to fight against some of the hardest enemies in the game without having to grind all that much.

Last, but definitely not least, try not to waste your end of story experience bonus you have accumulated. In order to avoid this, you need to get as much EXP as possible between the story chapters and then sleep somewhere in the places mentioned above before you progress through the story. By doing this, you will be able to cash on tons of exp before the automatic cash when ending a story chapter.

Also, if you happen to have an item called "Nixperience Band", use it every time when possible! This item will allow you to rest, camp or finish a story chapter without cashing in on the EXP. However, not everyone has it because, in order to get it, you had to download the so-called "Holiday Pack DLC from the PSN or  Xbox Live store. 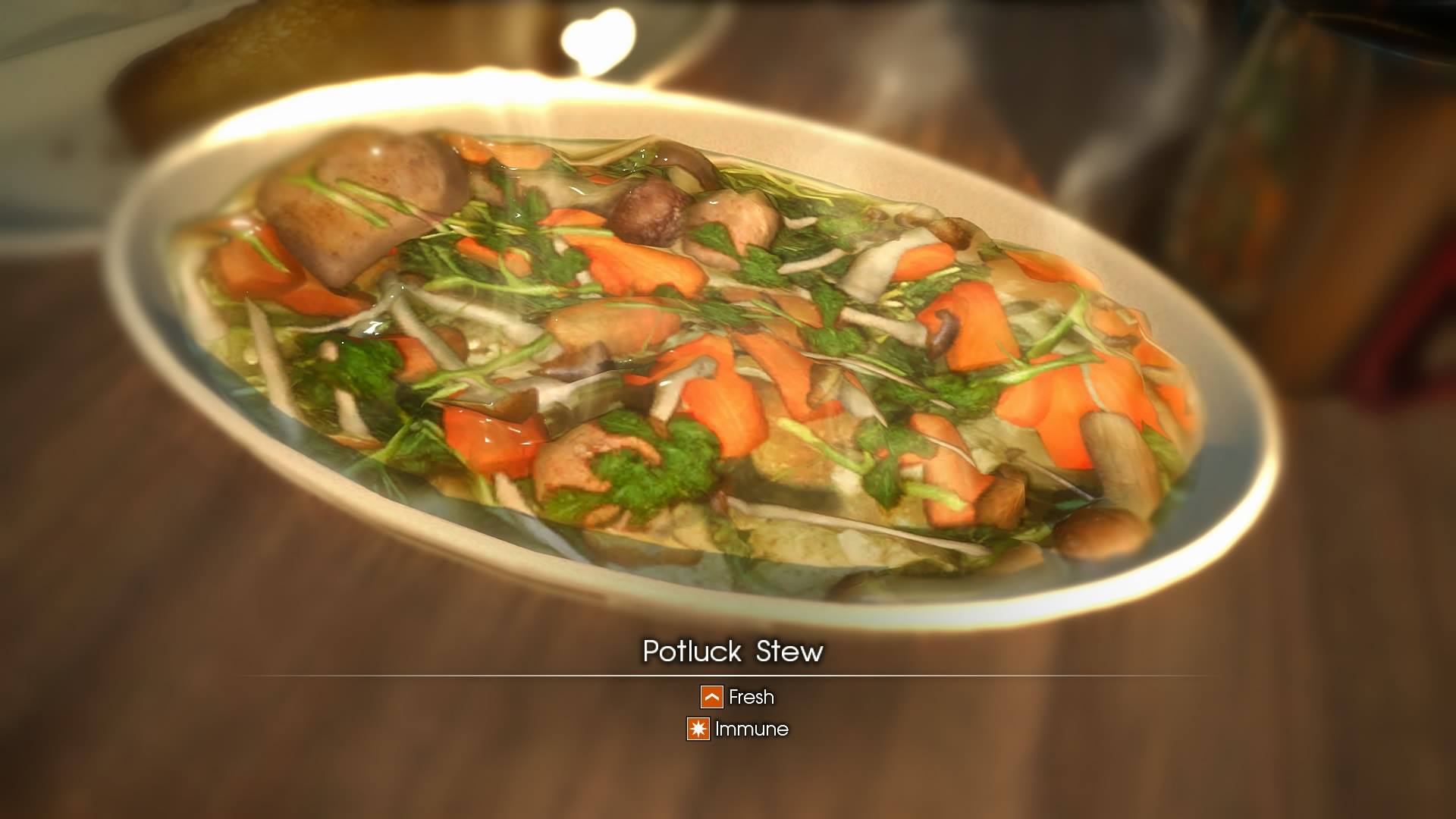 The food is a viable resource not only in real life but also in FFXV. There are a couple of ways in which the food can help you get more EXP. One of them is to just buy it from vendors and when you eat it, it will boost your EXP a little bit. However, in order to actually get it, you need to spend a lot of time getting to that vendor because they are not all that common. That's why one of the best things to do is to let Ignis prepare it at camps instead. Not only is it going to a lot easier, but you can also get some insane boost to the amount of EXP you receive.

It is important to know that the food boots the combat and mission complete EXP gains, which means that it should be applied as much as possible. The biggest downside of it is the fact that it actually works only for a certain amount of time. Having said that, there are a lot of recipes out there which can be very good. However, the Cup Noodles and the Fat Chocobo Triple-Decker are probably the best. Keep it in mind that you need to do a few things before you actually unlock them but the end result is definitely worthwhile.

Playing the main story and completing side quests 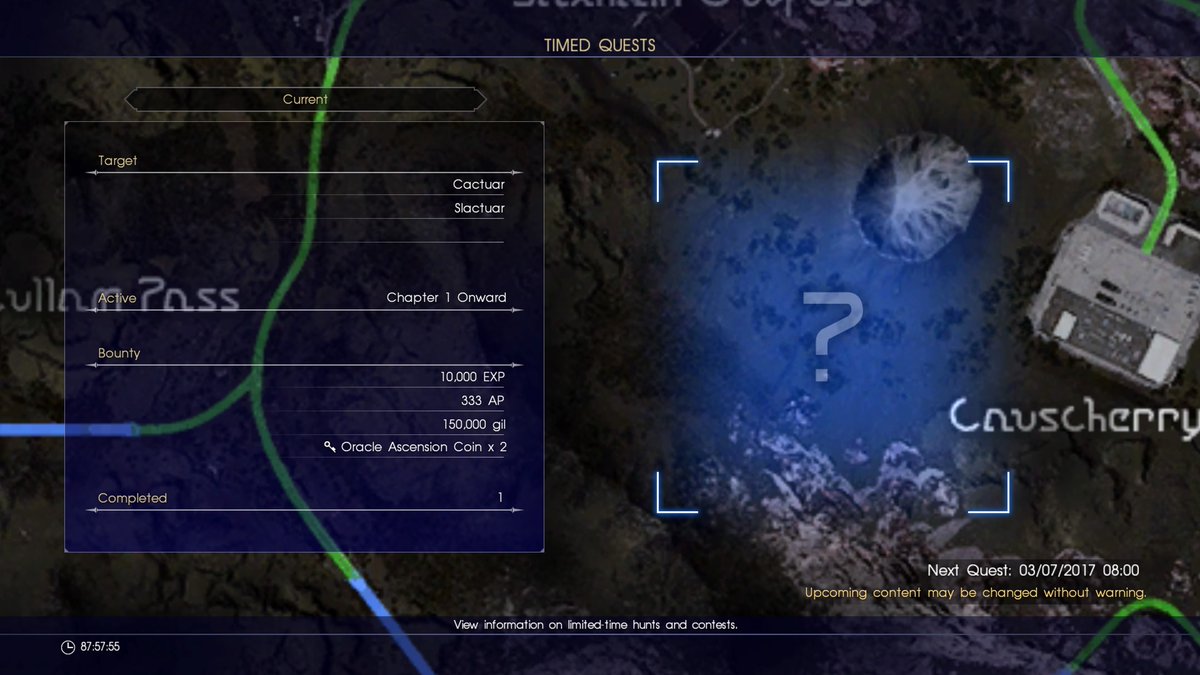 Like I mentioned earlier, Final Fantasy XV has a very decent EXP system which allows for fast leveling. Also, if you happen to lay your hands on the item called Nixperience Band, you can stock tons of exp. Once you do that, go to the various resting points in the world and you will be able to cash out tons of experience.

Of course, apart from doing all the main and important quests, you also need to do a lot of side-questing. In addition to that, exploring dungeons can also be a decent EXP booster, even though it might not seem like one at first.

Nearly all side quests are well worth doing due to the EXP bonus. Having said that, there are a few of them which are definitely worth more than others: 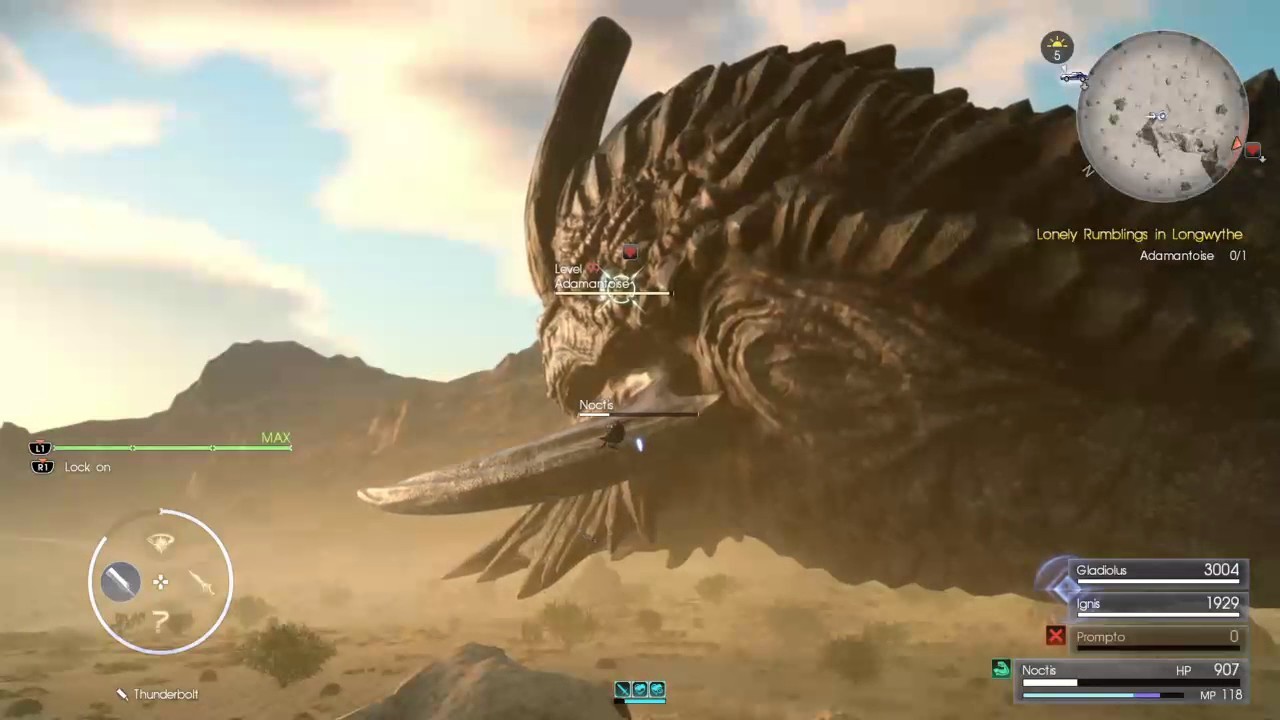 Apart from doing quests, resting and eating, simply killing enemies through combat is also a legit way to earn plenty of experience. In fact, there have been many cases where players miss out on a certain quest. When they do this, they are unable to continue to story unless they do this specific quest, which means that they are kind of stuck. That's where killing stuff comes to hand because it can provide a decent amount of EXP without you having to follow any specific task or do anything special.

The EXP reward for killing an enemy depends a lot on how quick, aggressive or efficient you kill him. That's why you should try to use a lot of teamwork, select the proper weapons and spells and do as much DPS as possible. Also, the higher the level of the enemy, the more exp you gain. This might seem like a pretty straightforward thing to do but keep it in mind that stronger enemies take more time to deal with. That's why sometimes it might be a good idea to just farm lower level enemies for longer. Not only is it going to be easier but the end result is pretty much going to be the same if not even better.