There are many collectible items in Fallout 4. Some of them are very rare to find whereas others, not so much. Having said that, the Vault-Tec Bobbleheads is one of the rare ones, which makes it pretty valuable. They are essentially figures of a Vault-Boy in different poses. However, apart from its collectible status, each item you get will increase a special stat of yours.

The end goal is to get all ten of them which will unlock a special achievement called "They're Not Dolls". What's more, if you happen to unlock all 20, you will get an even better achievement named "They're Action Figures trophy". Let's have a look at where are all the bobbleheads in Fallout 4.

Book "You are SPECIAL"

The first one is located just after you leave the Vault where you start the game.  If you are not there or already missed it, head over to the Sole Survivor's house in the Sanctuary Hills. Once there, go to the corridor on the left and then check the baby's room on the right. The "You are SPECIAL" skill book will be there on the floor. Pick it up and you will receive one point to put as a stat of your choice. 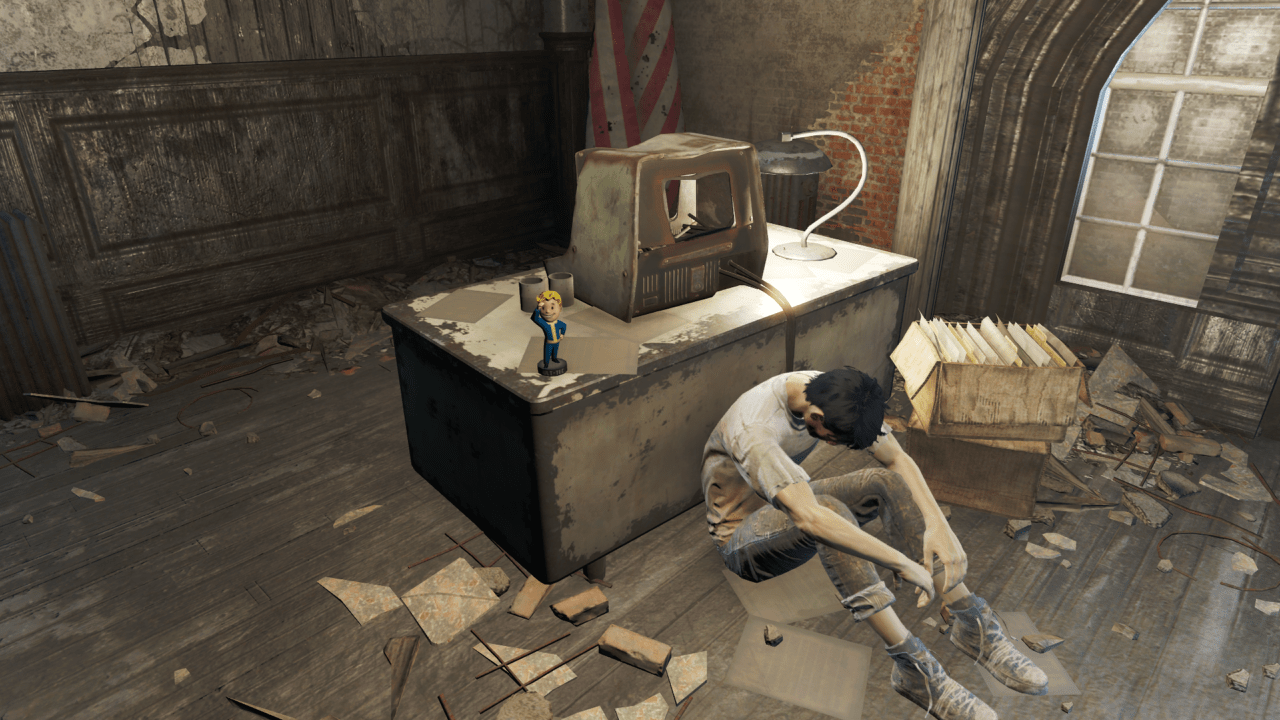 The Perception Bobblehead is a very cool collectible which is located in the room where you meet Preston Garvey, who is one of the potential companions. In fact, this room is located in the town of Concord. It might be tricky to go there at first but once you do, head over to the Museum of Freedom. When you enter there, look around for the room where the Minuteman are. The bonus you get from this one is a permanent perception increase by one.

For this one, you will need to be a little more acrobatic compared to the others. First, you need to climb to the top of the Trinity Tower, which is a very hard thing to do. In fact, I strongly suggest that you watch a YouTube video beforehand so that you can do it properly because it will take some time and unless you do it right, you will have to repeat the entire procedure.

The Melee Bobblehead itself will be in the cage where you first meet Rex and Strong. These two super mutants will, later on, become your companions, so make sure to treat them right. This Bobblehead will give you a permanently +25% critical damage with a melee weapon, which is very strong. 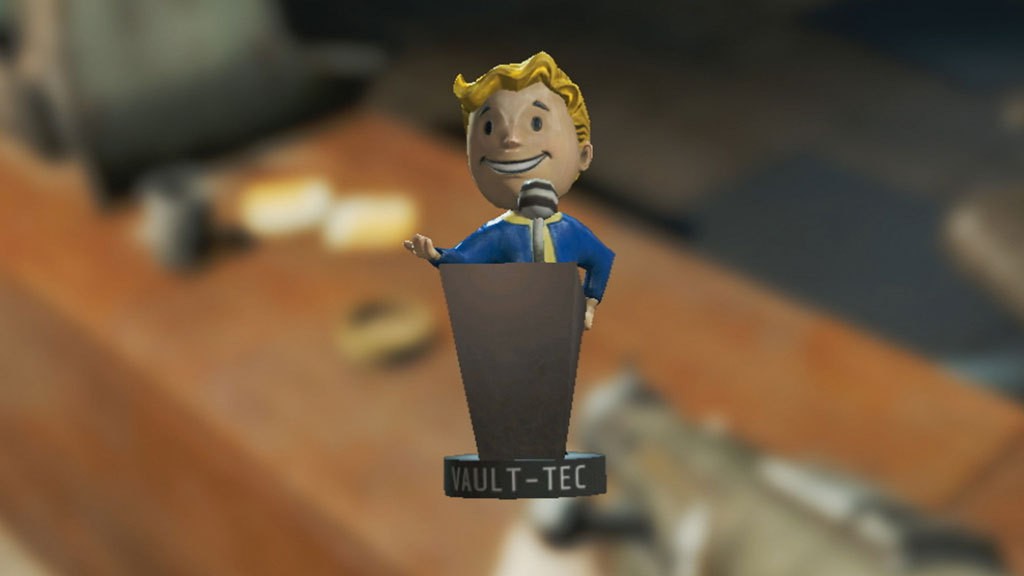 The next Bobblehead is definitely a lot easier to get compared to some of the mentioned above. In order to do it, you need to go to the Vault 114 and in specific - to the Overseer's office. In case you forgot, this is the same room where you will come across Valentine companion. Once there, look around for the Speech Bobblehead which will be on the desk. When you get it, All vendors will have permanently one hundred more caps for bartering.

The Energy Weapons Bobblehead is one of the strongest and also hard to get Bobbleheads in Fallout 4. However, if you manage to get it, the end result definitely makes everything worthwhile - you will permanently gain +twenty five percent critical damage with energy weapons.

In order to get this, you need to go to the Fort Hagen which is located on the west edge of the Commonwealth map. There is a quest there which will send you to find Kellogg. As soon as you get it, go through the fort and then you will see the Bobblehead in the kitchen area deep inside the fort.

Keep it in mind that you will have to defeat a couple of enemies here. One of them is the Protectron and Synth leader, who is kind of hard to deal with. However, if you actually succeed, you will unlock an elevator and ride it down to the second part of the fort. From there, just keep going down until you reach the mess hall and kitchen area. The bubblehead itself will be between the two refrigerators in the kitchen area. 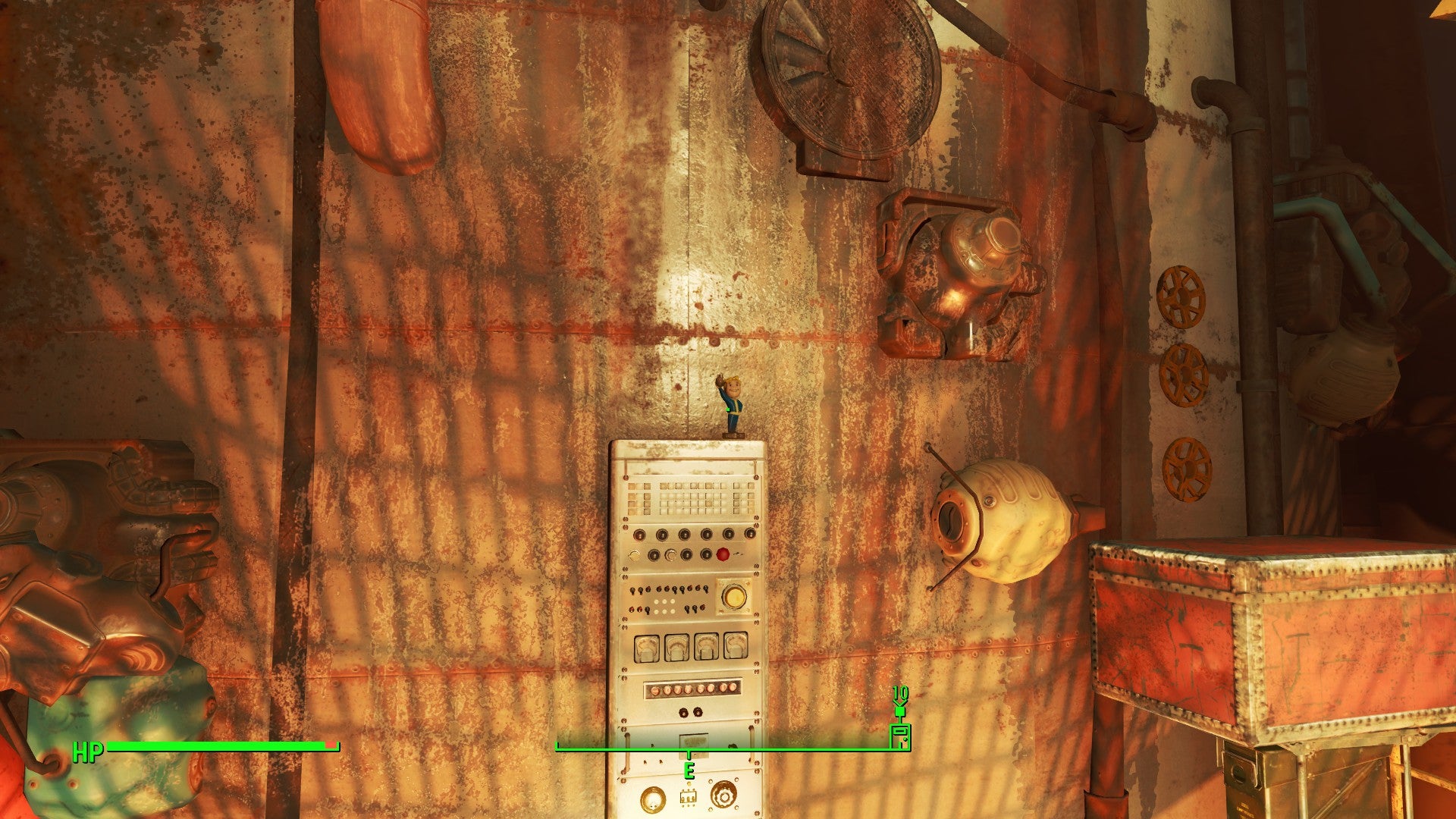 The Explosive Bobblehead is one of the coolest of all because they also increase your damage. In fact, you gain a +15% damage with explosives, which is definitely a lot because you use them all the time in Fallout 4.

In order to get this Bobblehead, you need to go to Saugus Ironworks and enter it. Once you do that, there will be a lot of enemies there which you need to deal with before you get access to the roof. As soon as you are ready, get on top of that roof and will take you to the Saugus Blast Furnace area. There, you will have one more fight on your hand - against the mini-boss Slag. Kill him and claim the Bobblehead on the platform where Slag was standing before you deal with him.

If you want to have this Bobblehead, you will need to go to Vault 75, which is located inside the Malden Middle School. Once you are there, head to toe basement of the school and this is basically where Vault 75 starts. However, in order the access the Lab, you will need to get the Lab Access Card inside from the Combat course on the Gunner Commander. Once you explore the lab, there will be a room at the very end full of people that you have to deal with. Each of them will have the Admin access card but the biggest prize will be just standing inside the room.

This Bobblehead will give you one extra guess when hacking terminals. 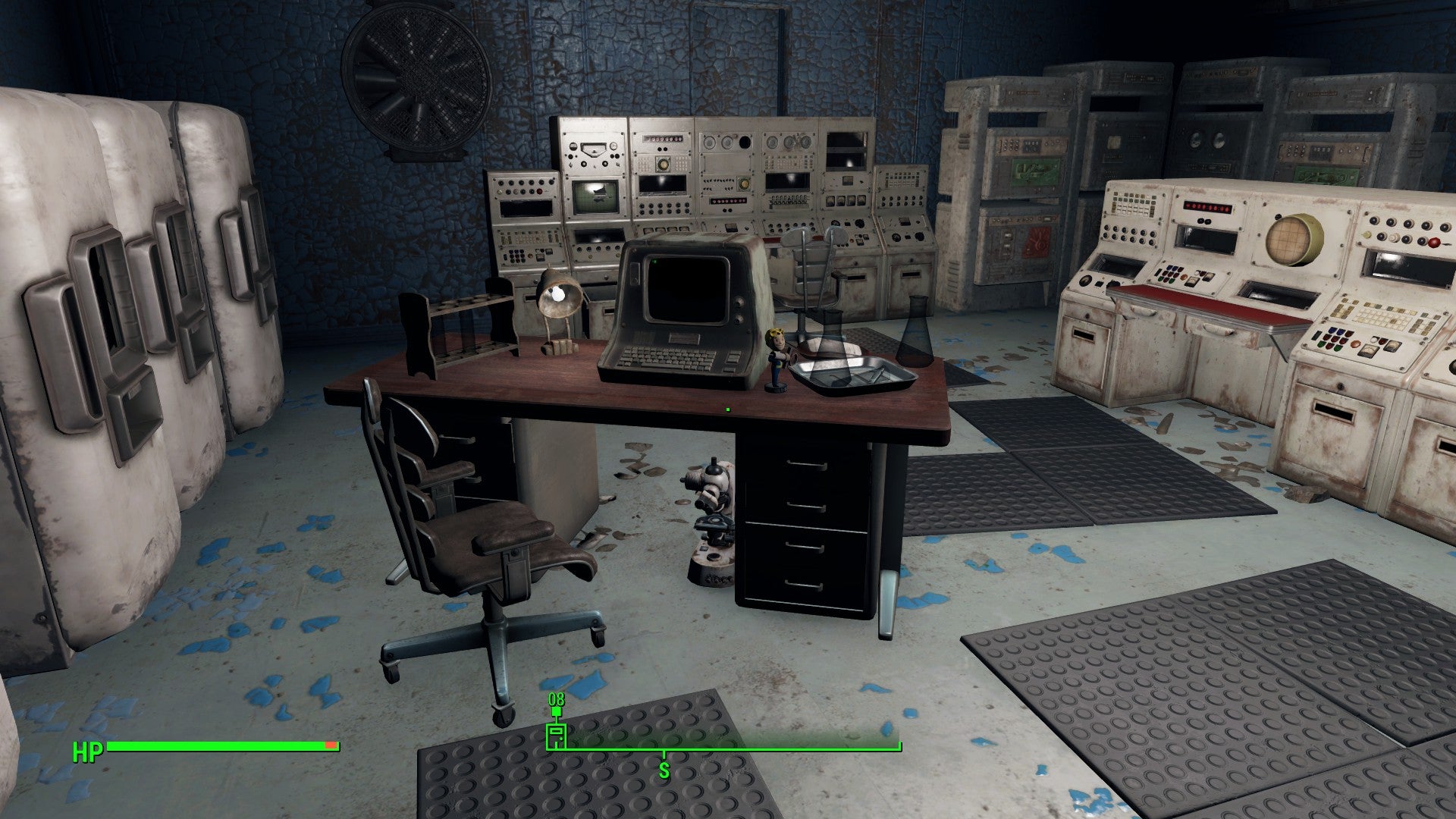 This is one of the most looked for Bobbleheads in Fallout 4. One of the main reasons is, of course, the effect - Stimpaks permanently heal 10% more damage, which is awesome.  In order to get to it, you need to go to the west of Diamond City and enter Vault 81. Once there, you will need to have 3 fusion cores in order to enter and then, you have to accept Austin's tour invitation.

There will be a lot of children there that you need to talk to and of them will ask you to retrieve his cat from outside. Later on, you will hear that Austin is sick and needs to go to the clinic, which will unlock a quest called "Hole in the Wall". The Bobblehead is in the Secret Vault, in a room where you will find also the cure for Austin's illness.  Once you go there, just talk to the robot on the other side of the glass who will open the door.

This one is located in the Boston Public Library which is very close to the cost. Once you go there, head out to the north-western corner of the building where there will be a room with a large PC. The Bobblehead will be right on top of it. What's more, this one will give you a permanent increase to your intelligence by 1. 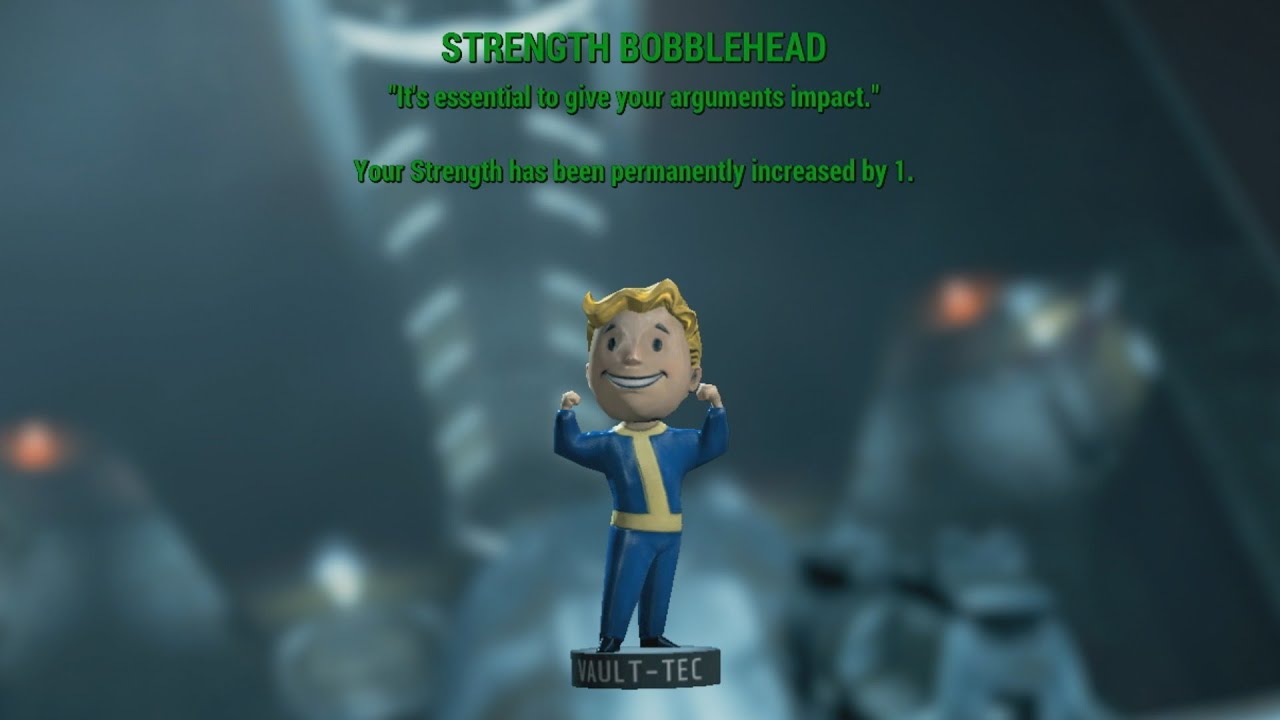 This Bobblehead is located on top of a sculpture ion the lobby of the Mass Fusion Building. When you enter the lobby, try to see a statue suspended on the wall. Go up and through the offices until you are right above it, which is when you just need to drop on the statue and claim your prize. The bonus here is a +1 permanent increase to your strength.

Location: On top of a sculpture in the lobby of the Mass Fusion Building. When you enter the lobby, look up – you’ll see a statue suspended on the wall. Climb up, going through the offices, until you’re above it. Drop onto the statue to collect the bobblehead.

For this Bobblehead, you will need to go to the Corvega Assembly Plant. Sadly, this is the easiest part, after that it gets pretty hard.

The first thing to do after you get there is to climb to the top of the plant where there is a big, blue tank. Try looking around in the are in order to find the Repair bobblehead. It is located at the end of the meta walkway surrounding the storage tank. The bonus from this Bobblehead is that fusion cores now permanently last ten percent longer. 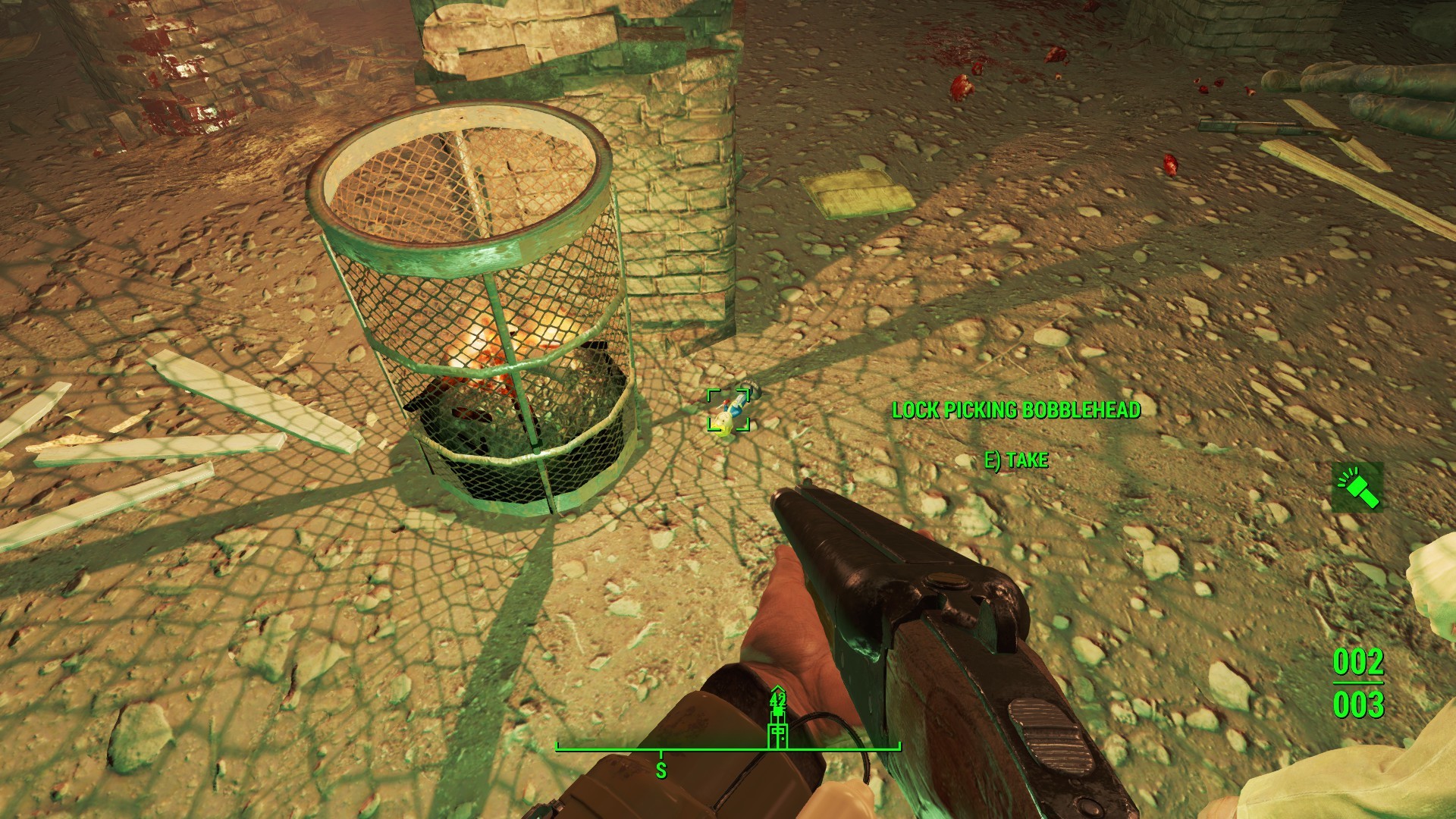 In order to get the Lockpicking Bobblehead, you need to go to the Pickman Gallery and clear the area until you reach Pickamn in the basement. Keep it in mind that this can be pretty hard to do, so you might do it a couple of times before you actually succeed. Having said that, as soon as you are ready, look on the ground next to the fire and the Bobblehead will be there. The bonus here is that from now on, lockpicking is a lot easier to do.

This Bobblehead is very cool because it allows being 10% harder to detect, which is essential in those types of games. In order to get there, go deep underground into the Dunwich Borers quarry until you reach a very foggy area. Keep it in mind that it is a little bit creepy down there but don't worry, there will be no enemies to deal with.

Once you get there, try finding a post terminal with the number four next to it. When you do, the collectible will be on a very small table just next to it. 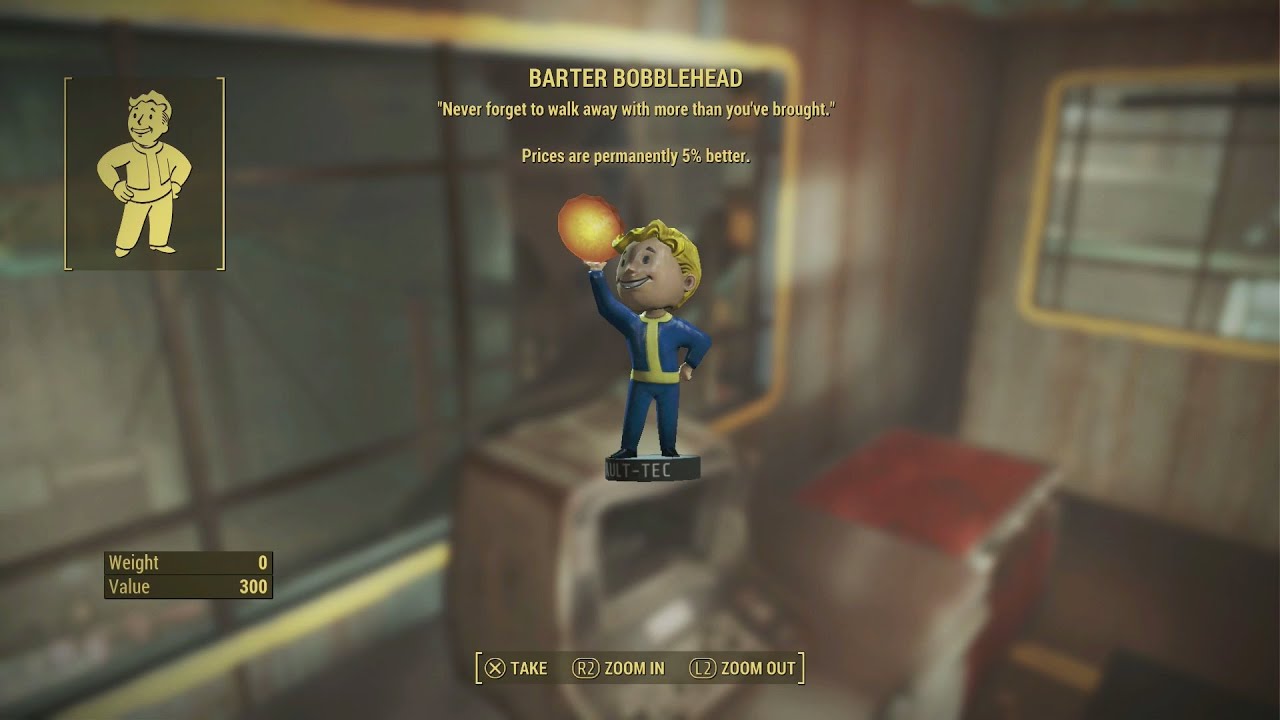 In order to get this Bobblehead, go to the Longneck Lukowski's Cannery. As soon as you are there, enter the main room and climb up. Your goal here is to get to the offices, which means that there are several ways in which you can do it. When you are done, the Bobblehead will be on a terminal in the farther one.

This one will give you better prices when buying something (5% better to be exact).

This is one of my personal all-time favorite Bobbleheads because, well, they give you +25% critical damage with heavy weapons. Oh, just imagine the pleasure when you are DPSing someone with a machine gun.

Anyway, in order to get it, you need to go to the living quarters which are located in the northern area of Vault 95. Once you get there, prepare yourself because you will need to deal with a guardian who is level 24. 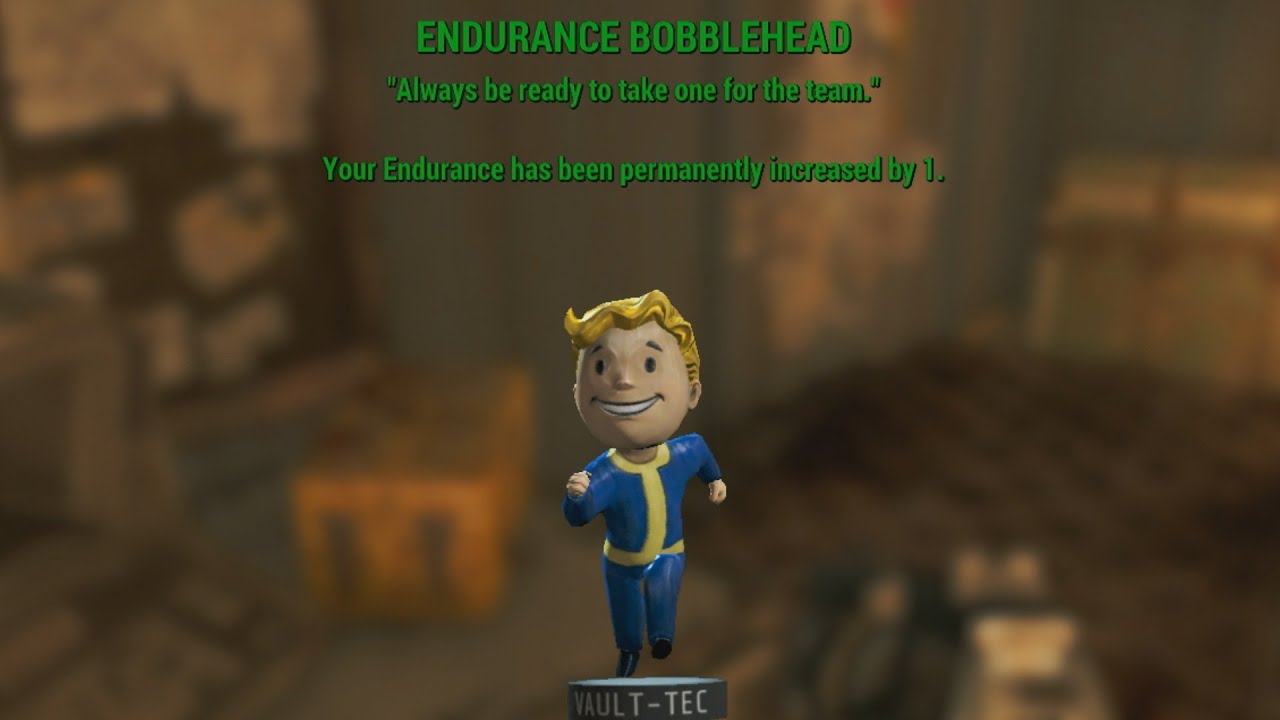 This one is located in Poseidon Energy, which makes it a lot harder to get compared to the others. In fact, in order to do it, you need to either pick a Master Lock to enter the facility or just swim in the immensely high radio-active waters which can kill you very fast. The other way if doing is to just go through the outflow pipes in the back, which is longer but it safe.

In order to do this, you need to climb onto the catwalk once you are inside. When you get there, there will be an office suspended above the floor, which will be guarded by several turrets that you need to deal with. In addition to that, there are also soldiers as well as a level 39 mini-boss. As you can see, you definitely need to prepare for this one.

The prize? Your endurance will be permanently increased by 1.