One special thing about the third day of ESL Hamburg is that it gradually gathered momentum to unroll the most dramatic games in the end.

It started with Team Secret methodically dispatching paiN Gaming into the 4th place of the group in 2 straightforward matches.

Next series between Alliance and Evil Geniuses carried greater importance because the Swedish team was fighting for survival in the tournament and needed to win both matches. First game lasted for more than an hour with gold advantage swinging until minute 55, when EG finally lost a couple of key battles. Second game took just 30 minutes and victory was on the side of the American team. At this point Alliance were officially out of the tournament.

In the third game of the match Vici Gaming destroyed Mineski, showing a world-class Dota 2 play.

Group B proved to be even more exciting than Group A. In the first series Forward Gaming took a game off of Team Aster, which was the first loss of the Chinese squad. If you are a Morphing spammer, make sure you check what Resolut1on managed to pull off with this here.

Virtus.Pro didn’t have a hard time beating EVOS, who had come to the tournament as a substitute of TNC and already lost their chance to go to the playoff.

The last games of the groups were the biggest nail-biter of the day. Ninjas in Pyjamas needed at least one victory over compLexity Gaming to secure a spot in the bracket, and it took forever to finish the series, with one game lasting 80 minutes, and the other — a little bit less than an hour. compLexity managed to secure victory in both matches and we will see them performing in the lower bracket today.

Right after the rocky play off matches viewers were greeted with another portion of high level Dota in the form of Upper Bracket matches. Both series were a fantastic back and forth that was a real treat to watch. 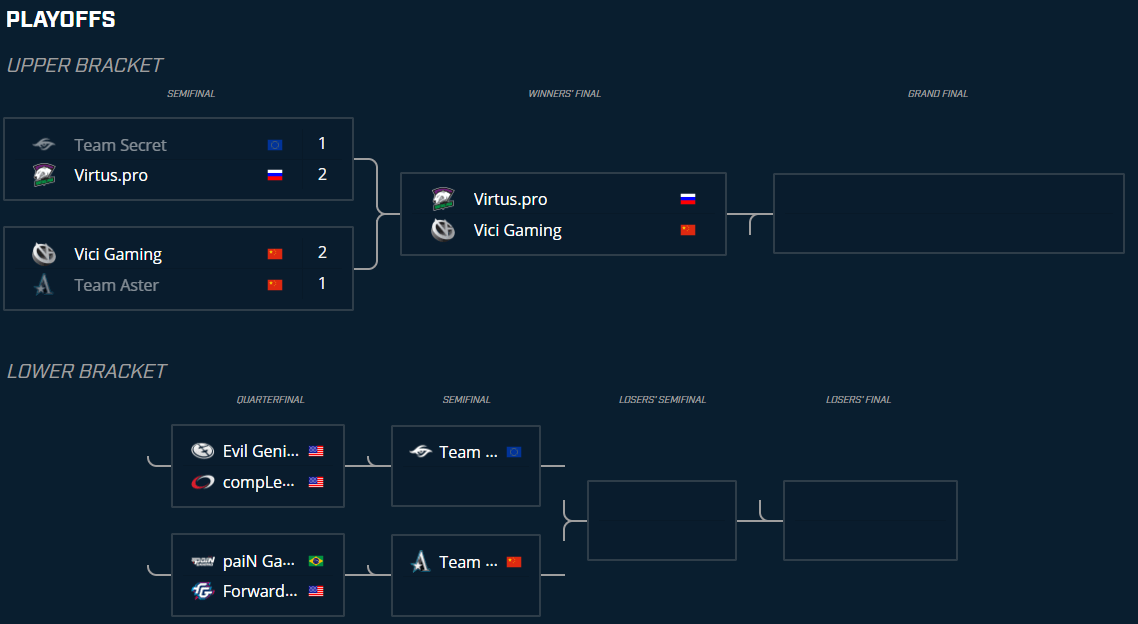 As you can see, Virtus.Pro and Vici Gaming came out victorious (both with 2:1 score) over the opponents, making way into winners' final, while their opponents dropped to the lower bracket. There's always a chance these teams will meet again later on at the event.

Here is the best match of the Day 3:

Check out our Day 1 Recap and Day 2 Recap for more information on ESL One Hamburg 2018.