“Kurt0411 received a two-month, five qualifier suspension on October 18, 2018, for an inappropriate video posted online. Next, on March 25, 2019, Kurt0411 received a Final Warning for new Code of Conduct violations. We shared at that time that if policy violations continued, our actions would escalate. After the vulgar videos posted on October 10, 2019, and October 19, 2019, we disqualified Kurt0411,” stated EA in a post.

Kurt0411’s most recent offence which earned him the ban was during a Twitch stream in which he was playing against Niklas "Nehisen" Heisen. After scoring an equalising goal, Kurt0411 cursed the game, hurled profanity at EA and then proceeded to spit multiple times on a scarf which featured EA’s logo.

The community is divided on the situation. However, his actions were unprofessional and against EA’s Code of Conduct. The EA Sports FIFA Competitive Gaming Twitter account put up a post regarding the situation.  “Disqualification from all EA SPORTS FIFA 20 Global Series competition and any future events scheduled beyond this season — effective immediately,” it read. 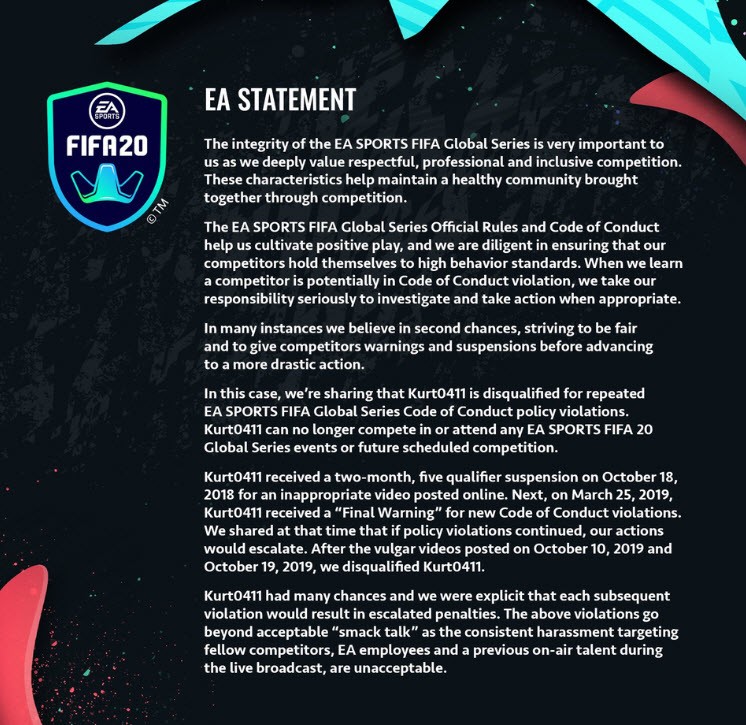 Kurt0411 has been very vocal about his relationship with EA and hasn’t taken any criticism from the community laying down. He admits to being very emotional, which has always led to him speaking his mind. That’s how he got into this mess, but EA’s ban focuses on the manner of his protest and not the protest itself.

Whether this incident will improve Kurt0411’s relationship with EA is unknown, but it will certainly give him time to cool off.