Since October 17, Valve began to reveal new Heroes and Alliances coming to Dota Underlords soon with The Big Update.

Each day the developer shares new information regarding the upcoming additions and changes coming to the game. The update will also mark the end of the game's beta, which is why it's so huge and so exciting.

So without further ado, here's all The Big Update previews shared so far.

The first preview introduces the new Healer and Insects Alliance alongside, some fresh Heroes.

This new Alliance includes Enchantress, Necrophos, Omniknight, Warlock and the new Hero Dazzle. Healers will have the ability to amplify all friendly healing. 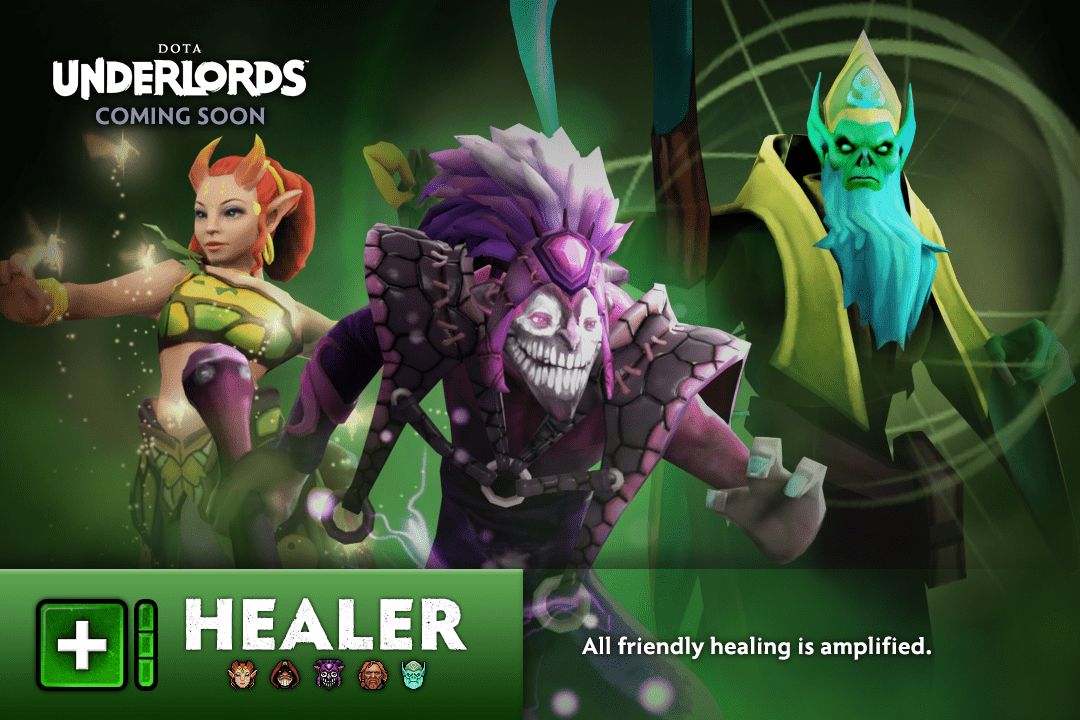 Dazzle is Tier 2 Troll and Healer with the ability Shadow Wave which sends out a bolt of power that heals allies it arcs between and damages nearby enemy units.

This new Alliance brings with it the three new heroes Broodmother, Nyx Assassin and Weaver. Its ability causes Spiderlings to swarm enemy units from the edge of the board. Those bitten have a chance of missing their attacks. 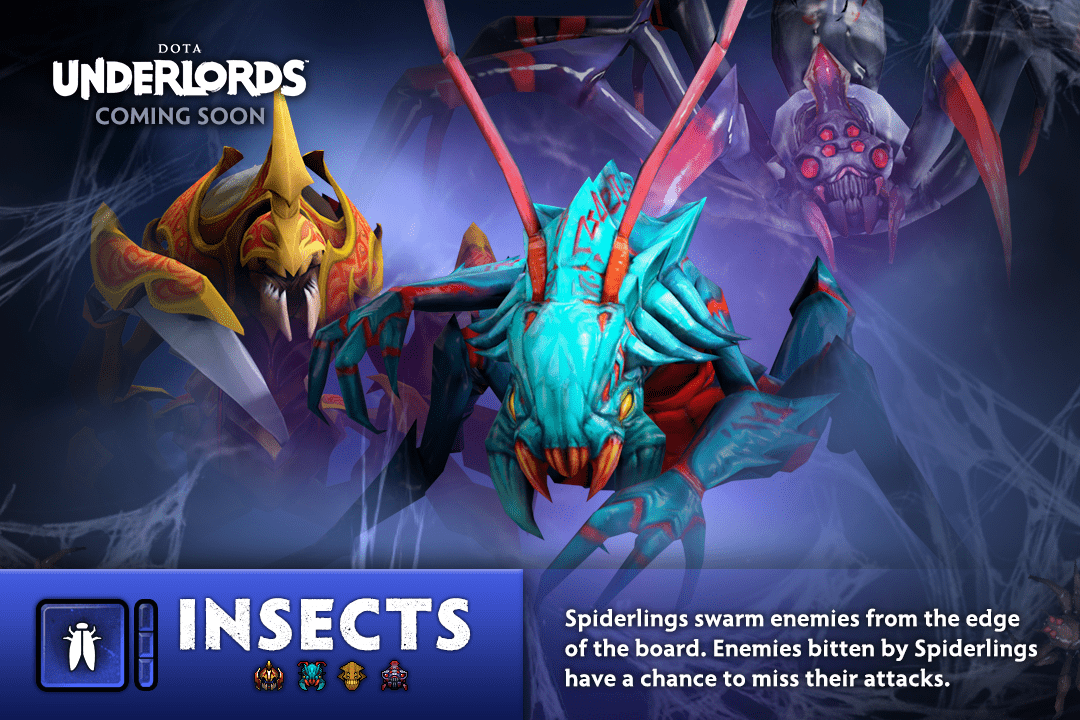 This is a Tier 4 Insect and Warlock with the ability, Spin Web. This places a web on an enemy unit which causes them to lose attack, cast and movement speed.

Nyx Assassin is a Tier 1 Insect and Assassin with the ability Spiked Carapace. These negate and reflect damage dealt while stunning the source of damage. There's also Vendetta which allows Nyx Assassin to deal bonus damage on his next attack after teleporting. It will additionally apply BREAK to the enemy and disable all passives.

Weaver is a Tier 2 Insect and Hunter with the ability Shukuchi. This allows Weaver to shift out of visibility, becoming untargetable in the process. As it moves through targets, it deals damage to each enemy it passes.

Members of the Champion Alliance receive all Alliance bonuses. For now, there seems to be only one Hero assigned to it. 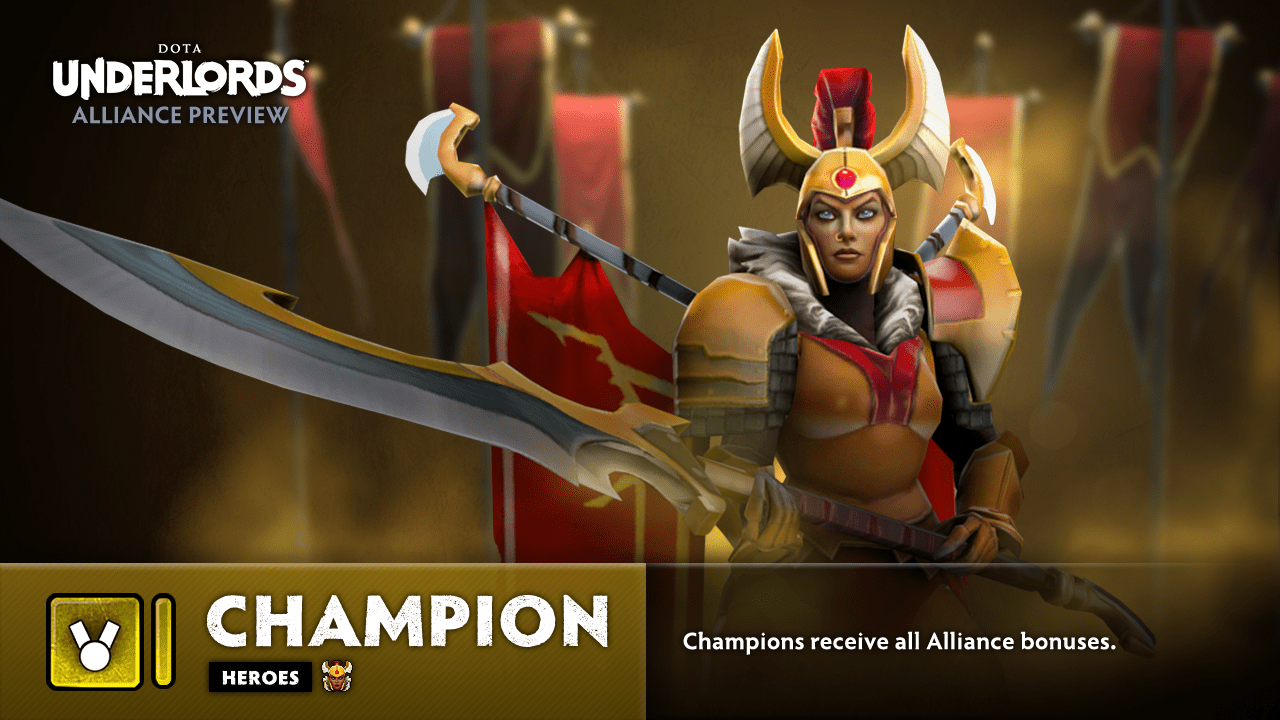 Legion Commander is a Tier 3 Human and Champion. The ability Duel targets the lowest health enemy and forces them to attack each other. If either dies during its influence, the winner gains a permanent damage bonus. 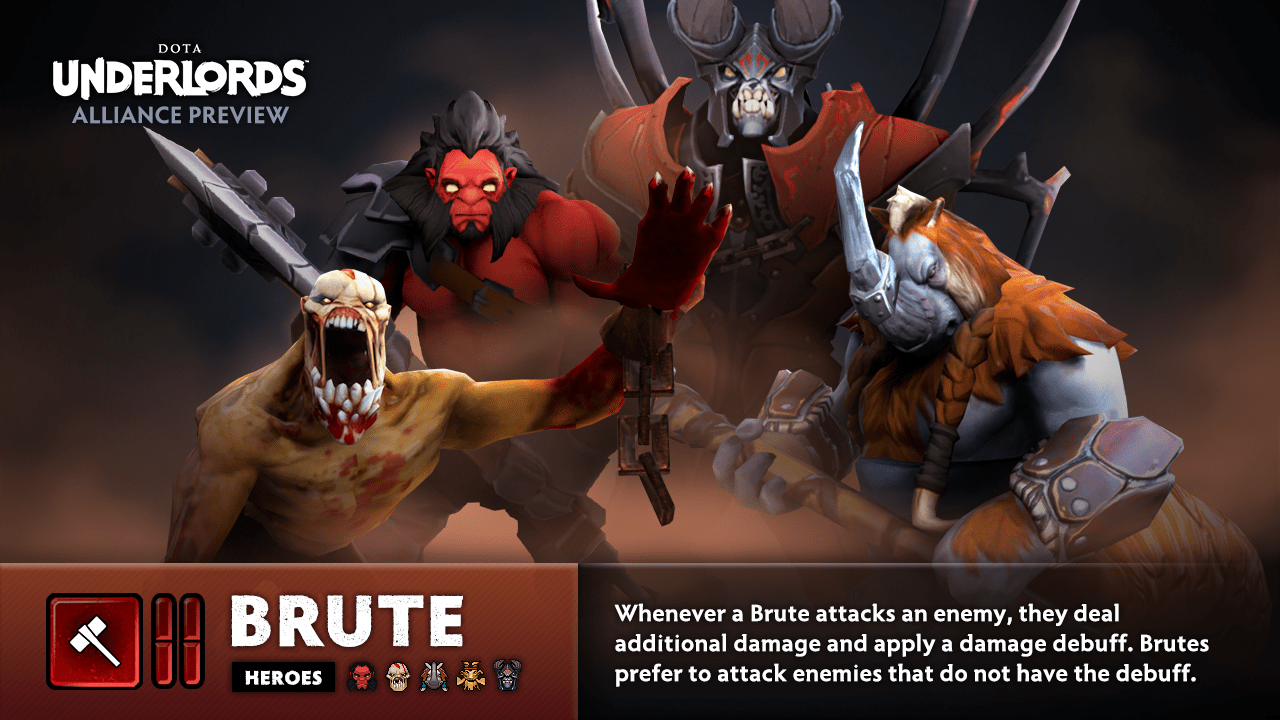 Whenever a Brute attacks an enemy, they deal additional damage and apply a damage debuff. They, however, prefer to attack enemies that have no buffs.

This Tier 1 Heartless and Brute possesses the ability, Feast. His attacks damage enemies and heal him for a percentage of his target’s maximum health.

Magnus is a Tier 2 Shaman and Brute with the ability to enrage an ally, temporarily granting them damage and Cleave. It's called Empower.

This Tier 1 Heartless and Demon will repeatedly purge targets, removing their buffs, slowing movement and attack speed for 5 seconds. Named Demonic Purge, when it ends the target is dealt damage.

Bristleback is a Tier 4 Brawny and Savage Hero with the ability Quill Spray. He shoots quills from his back which damage nearby enemies. Those they hit will also take additional damage for each time they’ve been hit by Quill Spray during the round.

Sven is the first Ace Tier Hero introduced so far. He is Human, Scaled and Knight with also the most abilities revealed for a Hero. God’s Strength enrages Sven and gives him amplified damage. Cleave is a Passive which allows Sven’s melee attacks to strike nearby enemy units for a percentage of his damage. 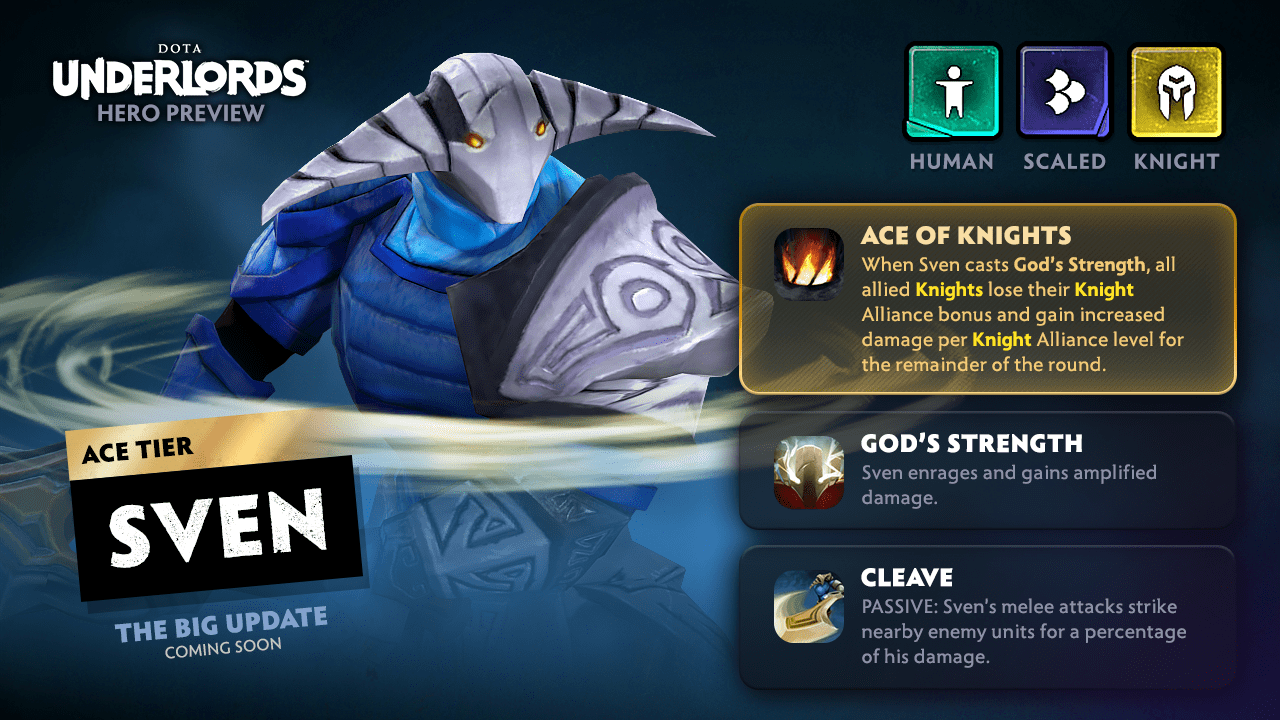 Last but not least is the powerful Ace of Knights. When God’s Strength is cast, it causes all allied Knights to lose their alliance bonus and replaces it with increased damage per Knight Alliance level for the rest of the round.

You can check out the full posts here.