We are not tired of kotlJAM and Joel "ImAFanOfKnights" Larsson, what about you?

It's day two and the time for North American part of WePlay! Dota Underlords Open — Crimson Gang is right here.

A quick break: if you have missed the first day, head here for EU and here for NA. Also, you can see what was at today's Vicious Order battle and who have made it into Cross Group Finals.

MeNoHaxor started very vigorously with 2-starred Chaos Knight and Bounty Hunter, who he had obtained at the 7th round. ZabeyYaka followed him with a 4 battles win streak. [F]umeche, in turn, preferred the Knights and the Trolls. He began gradually stepping into the top 4. By round 15, the situation changed quite a bit: BBG with a pack of Warriors and Ratt12 with Savages and Hunters on the table burst forth. But these guys did not last long in the lead: a lively meta, very even opponents, BBG advantaged 25 HP and continued to build on the lead alongside Joseph. Yesterday's leader Fibonacci tried the Demon Hunters... and got kicked out first. Problems started with Ratt12 and ZabeyYaka, who fought desperately for survival but still lost the lead to Joseph. 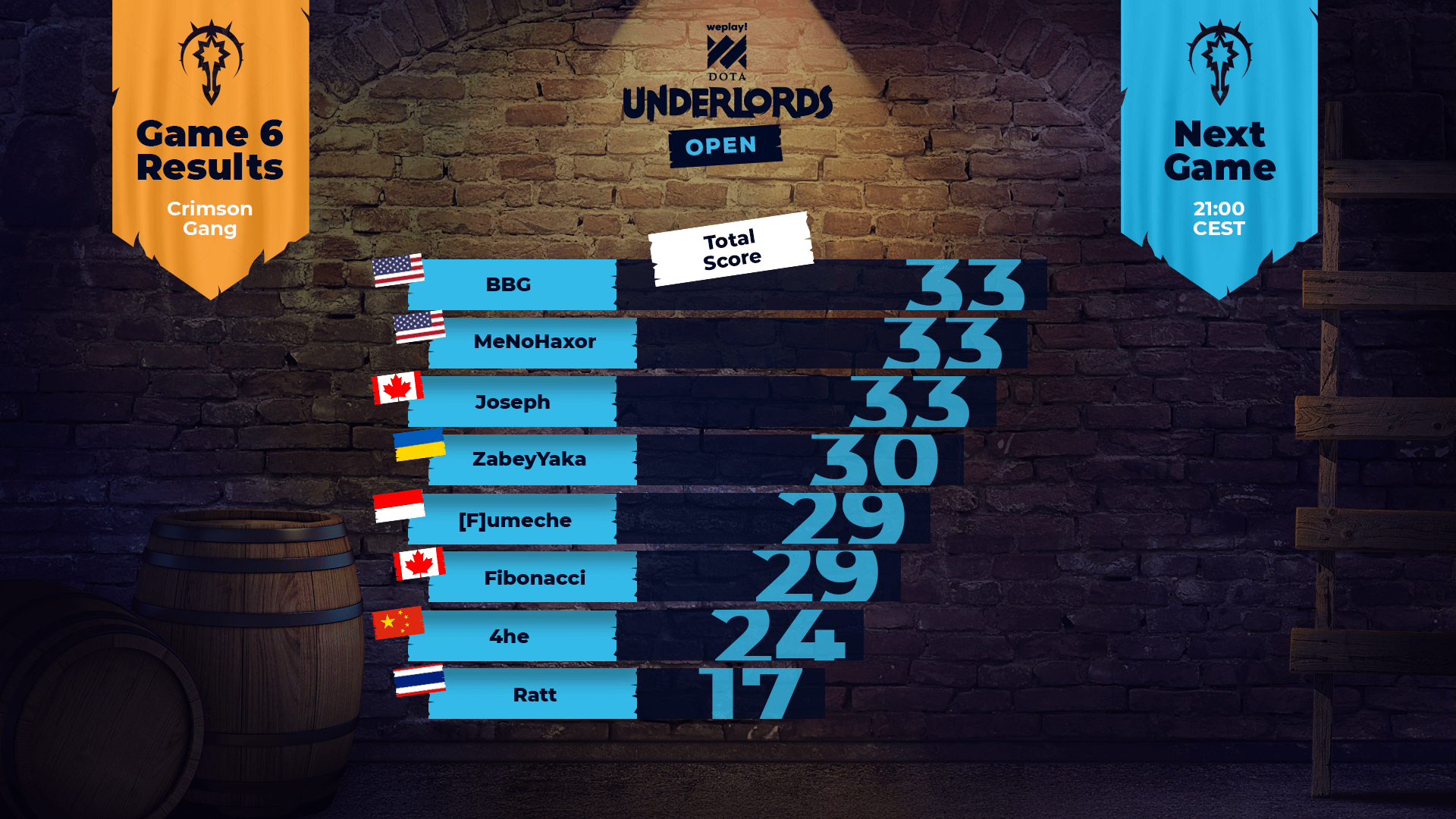 In the second game of the day, BBG and 4he showed themselves quite well in the early stages; Joseph found himself a fairly good play. By the middle of the game, the situation had not changed much: BBG again burst into the top-1, Joseph followed, but ZabeyYaka and his knights all turned out pretty sadly: last place and 6 health points. [F]umeche spent his last 3 gold to get the third Terrorblade, but he could not escape defeat, and Ratt12 followed him. Three more players had 5 and 3 health units left, the evening ceased to be languid. MeNoHaxor knocked out Fibonacci, leaving him in sixth place and immediately broke his teeth about ZabeyYaka, who was saved by the Chaos Knight, guaranteeing the top 4. Joseph took second place with his Trolls, Hunters and Knights. The first went to 4he. 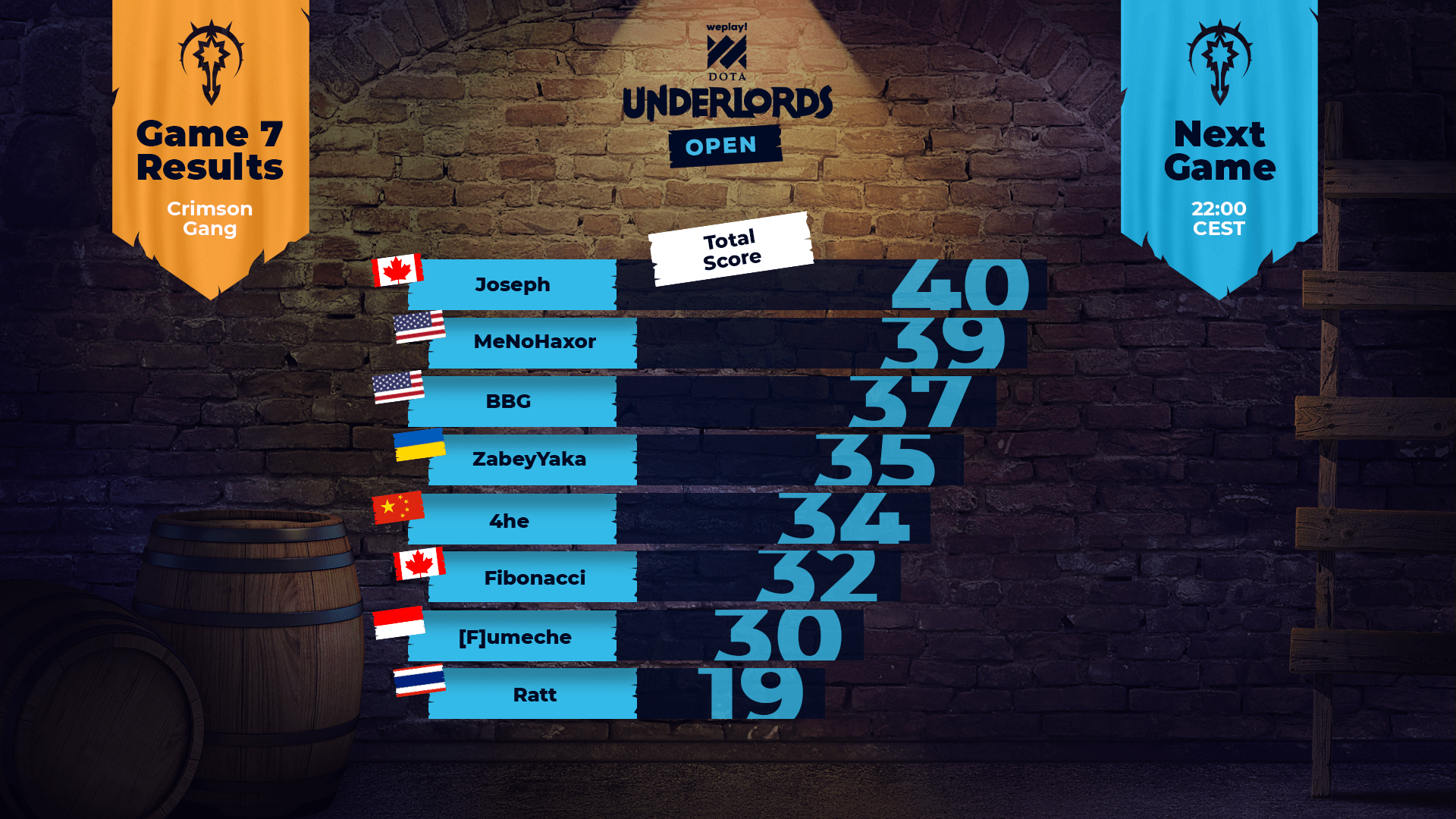 The third game (or the eighth for Crimson Gang) began very smoothly: all players evenly lost HP, desperately trying to catch some points. Quite quickly, Underlords Open participants felt for a new meta and by the 19th round, Ratt12, Joseph and Fibonacci settled in the top places of the list. BBG got stuck in the lose streak and flew out of the game from the eighth place, leaving the rest to fight for precious points. By round 30, none of the participants had lots of HP. As a result, only three players survived the 34th and 36th rounds: Joseph, [F]umeche and Fibonacci. The first game, by the way, reached the round 40 and two players survived it. The first place nevertheless went to [F]umeche. 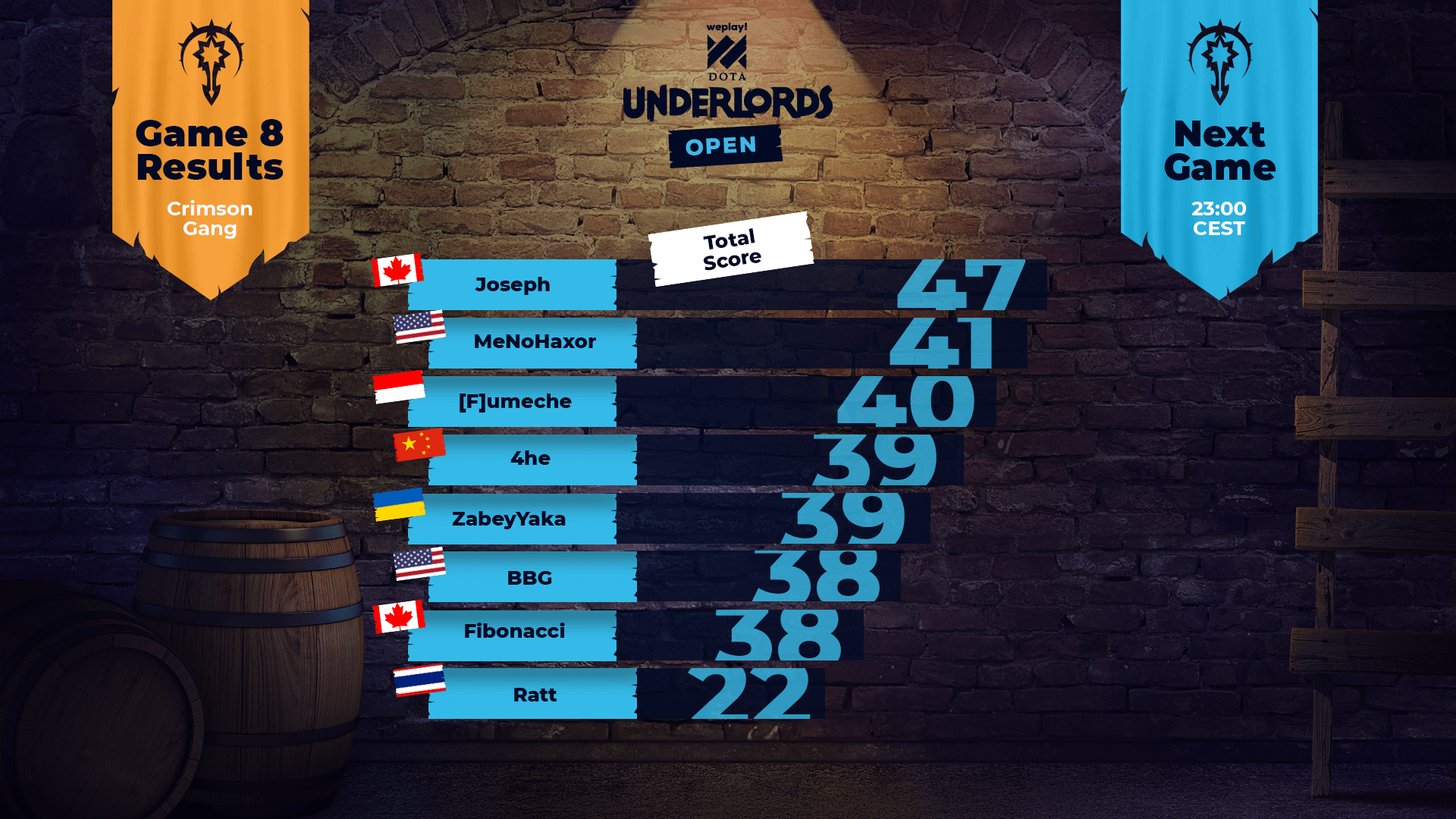 The ninth match began with a traditional tight fight and a risky attempt by Joseph to obtain Mages. Four participants of the tournament immediately went to recruit Knights, though each synergy was different: Warriors, Heartless, Demons. ZabeyYaka hasn't found his luck for today, having a 2-11 lose streak. Gradually, Fibonacci and MeNoHaxor dropped to the very bottom of the game table. So the desperate struggle for the final top 4 started — the Cross Group Finals were at stake. Again, BBG broke away from all the rest, compensating his loss in the previous game. [F]umeche and 4he followed him by round 30.

After 31 rounds, Fibonacci and ZabeyYaka dropped out, the latter has made a disappointing mistake while placing his heroes (broke the synergy of Warlocks and Trolls), Ratt12 followed them. BBG grabbed the most powerful level 3 Terrorblade and felt as comfortable as possible with a double advantage in HP from the second place, literally breaking the faces of his opponents. Again, the guys made it round 40 and BBG even becomes the boss at this level, deservedly getting first place in the ninth game. 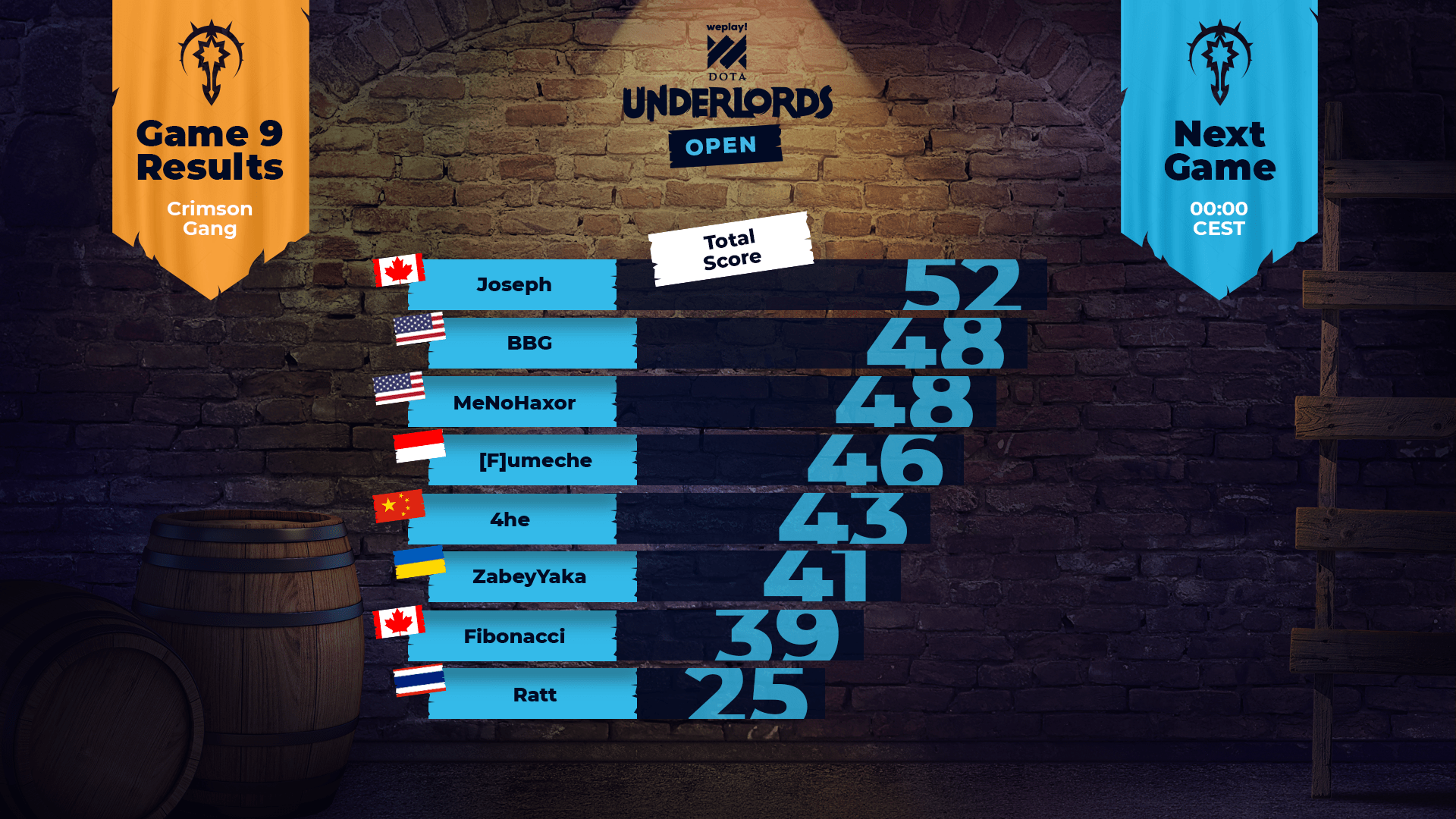 The decisive match of the American division. By the 14th round, 4he and Joseph were very unlucky losing half of their HP in an attempt to interrupt their lose streaks. And if 4he managed to get out, Joseph was stuck in last place with 8 health points. Ratt12 and [F]umeche were the leaders managing Demon Hunters. Then BBG drops out, making the intrigue to its maximum, and ZabeyYaka got a magnificent team of Heartless and Knights, breaking out into the leaders, wow! 4he and MeNoHaxor remained in the top three, and 4he unexpectedly took the first place, depriving ZabeyYaka of the finals. 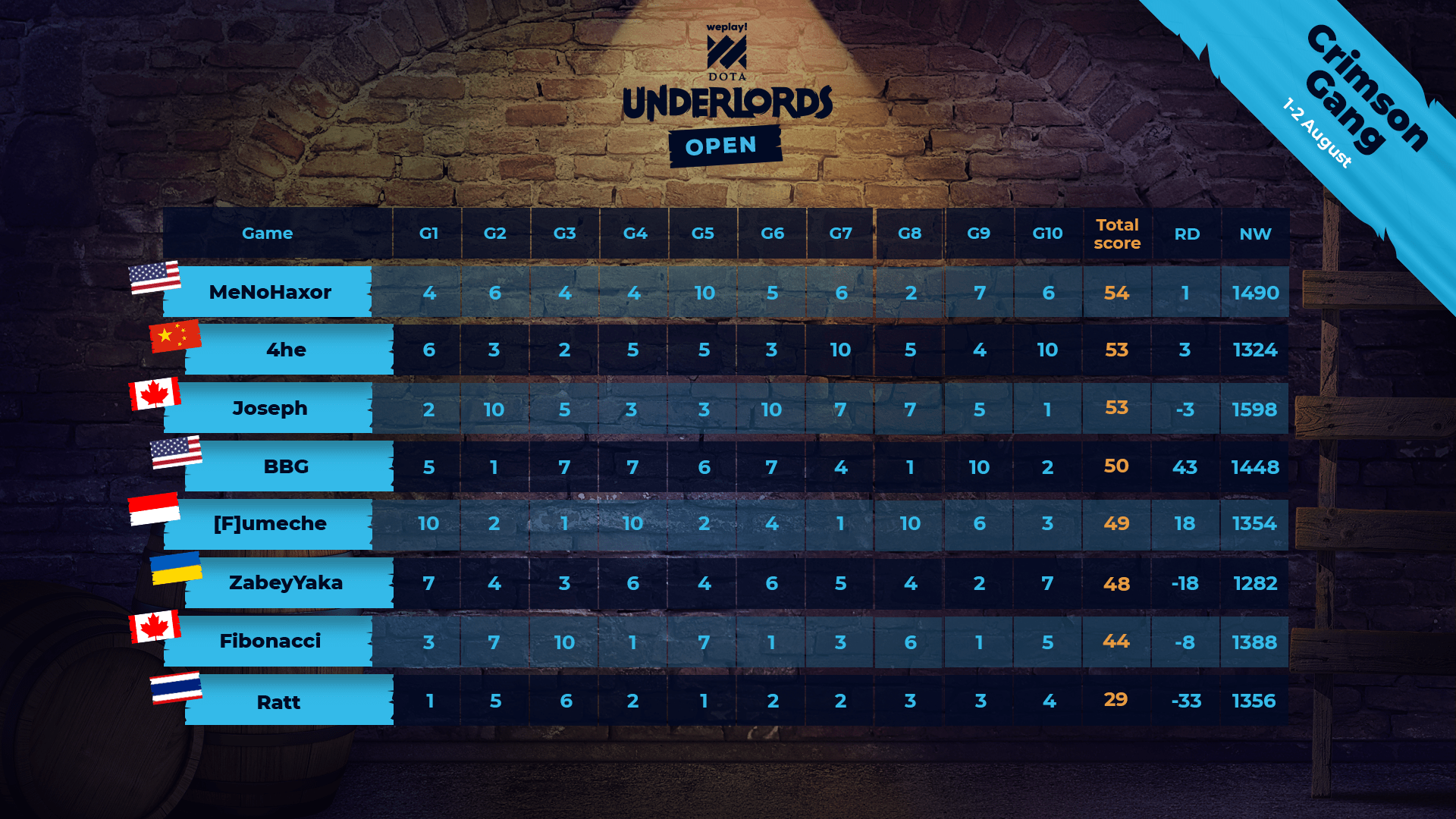 [F]umeche, ZabeyYaka, Fibonacci and Ratt — thanks, guys! It was a pleasure to watch you at our tournament! Good luck in future!