The confrontation of the eight best players is what we have been waiting for several days. They started right off the bat: BGG and Yca4 had early win streaks with the Knights and Savages with Warlocks, respectively.

And where are the Demons? They are all at Cmel's deck — he collected a very promising pack of heroes for himself in a series of defeats and started picking up victories, breaking into the Top-4.

Yca4 settled in the first place with a bunch of Savages and Warlocks by round 16 (he had a crazy 12-0 win streak, we thought he'd get a clean sweep).

The American division representatives didn't play so smoothly: 4he and MeNoHaxor suffered from attacks more often than the others in attempts to collect Knights and Demon Hunters. BBG flew to the last place with his Trolls and Knights. Despite the enormous difficulties, 4he managed to survive, collecting a curious combination of Demons and Warriors with a Scaled pocket and got to Top-3. He also managed to eliminate Cmel. The first place went to Yca4 - no one was able to oppose anything to his heroes. 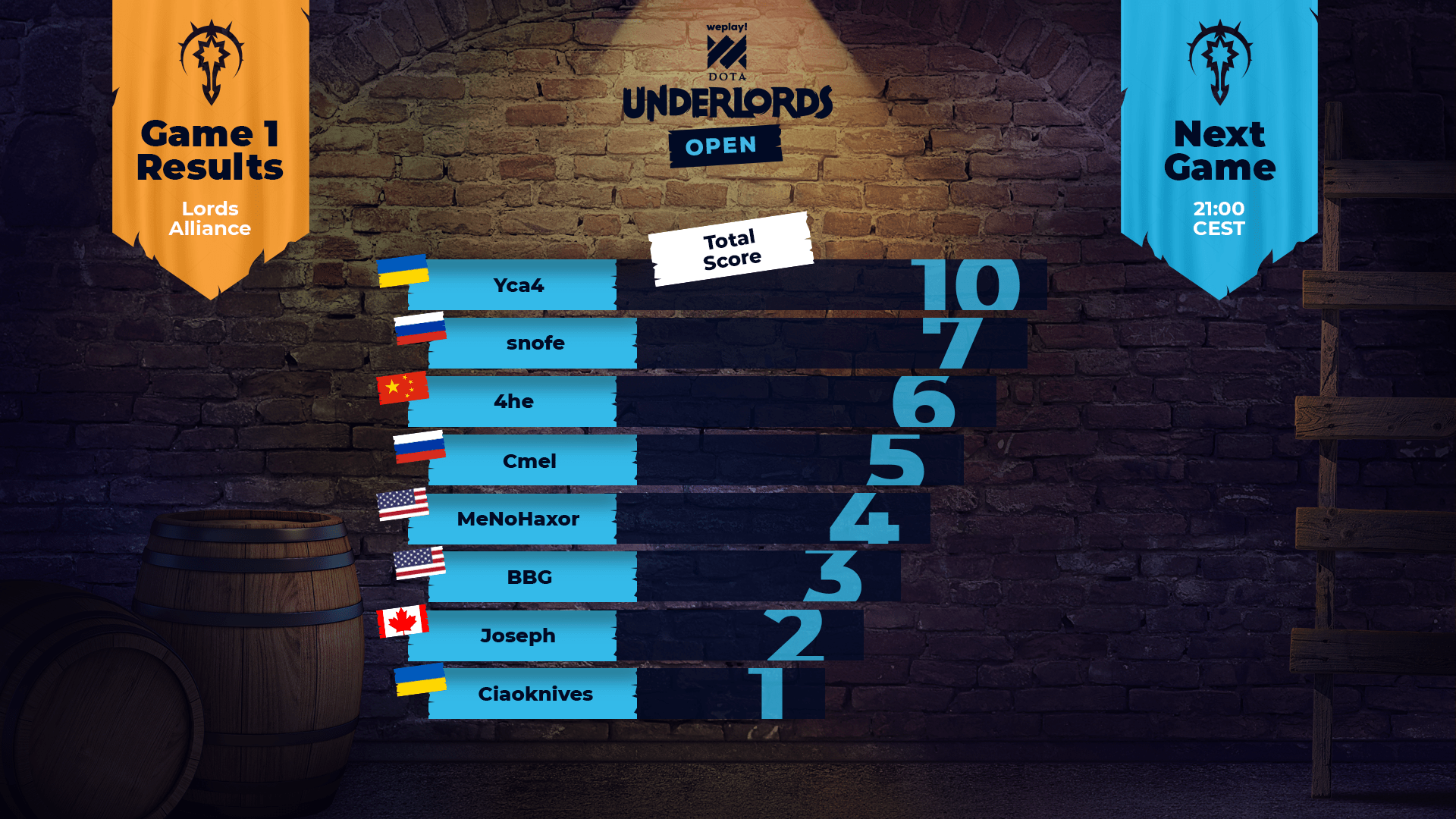 Yca4 showed very competent play in the second game again with the Savages and Heartless. The previous round  - BBG and MeNoHaxor became the leaders by round 7, both choose Warriors and Primordials. Cmel and Yca4 stepped on their toes. One of them went with six Knights by the 18th round, and the other assembled an interesting board with the Savages, Warlocks and Demon Hunters.

Yca4, who took first place in the previous game, lost early this time. Joseph came out on top with nine (!!!) Elusives and BBG took the second place with Assassins and a Mages pack. And all the fun began by the 33rd round: five players were on the deck, and three of them had 1-2 HP. BBG and Joseph were the first to lose unexpectedly, leaving Snofe and Cmel on the deck to fight for the Top-1. The victory in the game goes to Snofe! 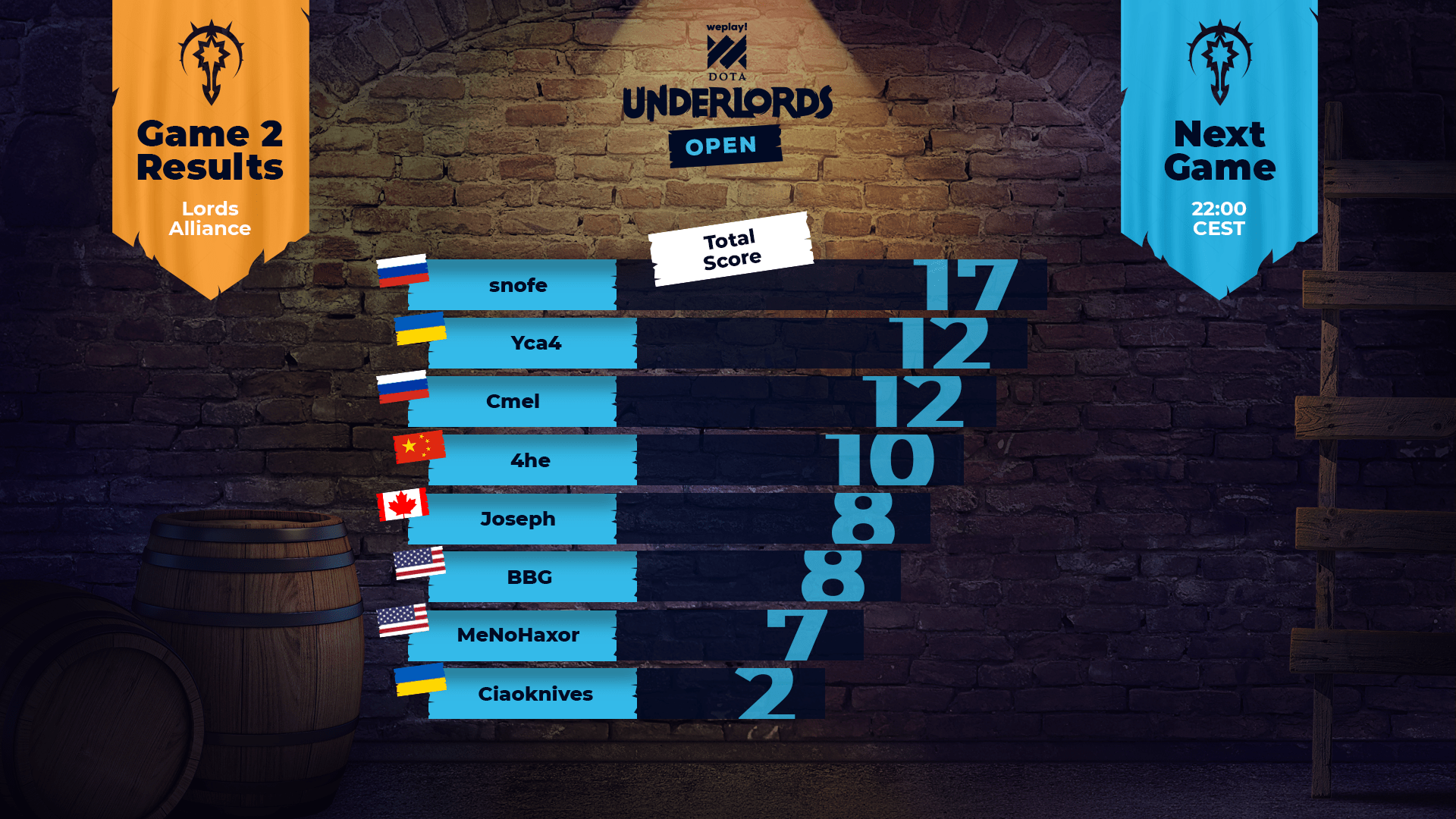 Ciaoknives has gathered almost all of the game's Batriders from the start. MeNoHaxor comes out on top with Savages, Warriors and a wild 6-0 win streak. Joseph collected Elusives again: there were six for the 14th round and sneak up to the Top-2 Snofe with Knights and Trolls. BBG's experiments with Mages, Humans and Heartless failed again: the player was at the last place with 29 HP, but several successful rolls levelled the situation for a while. Not for long, since the player still flew out in the 28th round with an eighth place. Yca4 somehow quietly gathered a level 3 Sniper with Mask of Madness, but even this didn't help him, and he ended this match with the seventh place. Joseph, with his Elusives, didn't notice snofe and his four heroes with level 3, leaving him only 2 HP. The situation from the second game repeated: one leader and several participants with a critical health reserve. All the CIS representatives were eliminated and 4he (2nd place), MeNoHaxor (3rd place) and Joseph (1st place) distributed the points for the Top-3. 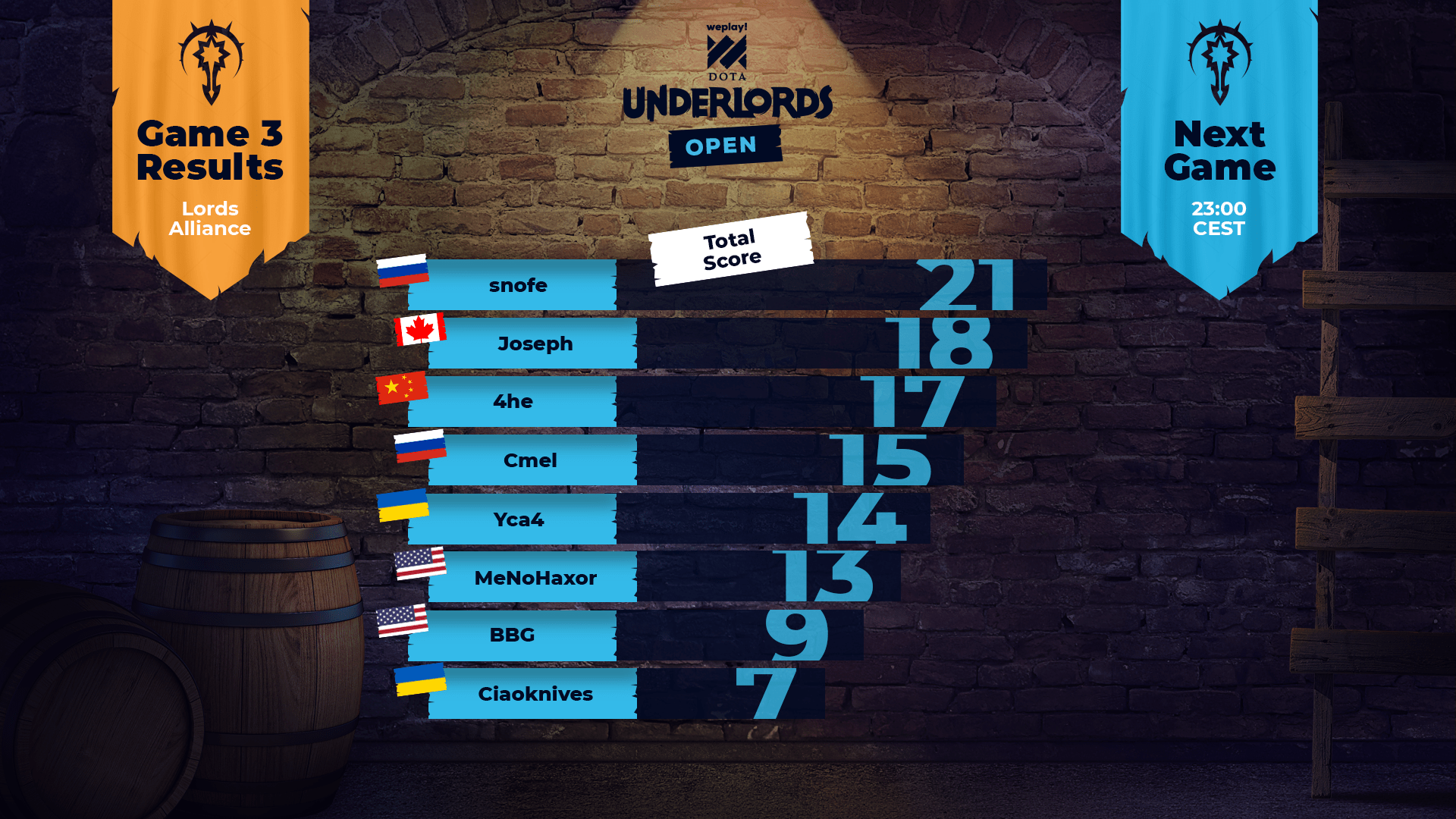 The fourth game revealed one undisputed leader — Yca4, who gathered a good gang of Savages with Warlocks. MeNoHaxor was near him with Knights and Heartless. Cmel with Knights felt good, and Joseph’s tactic with Elusives was in danger: three players immediately decided to collect Elves for themselves. Ciaoknives' first game day in the Finals didn't get into the meta at all —  he's at the eighth place again with 10 HP. Nevertheless, he flies out from 7th place after Joseph. MeNoHaxor with six Knights breaks out to the first place and immediately was beaten by snofe, who entered the Top-2 again and left no chance for an opponent in a fight for the first place. 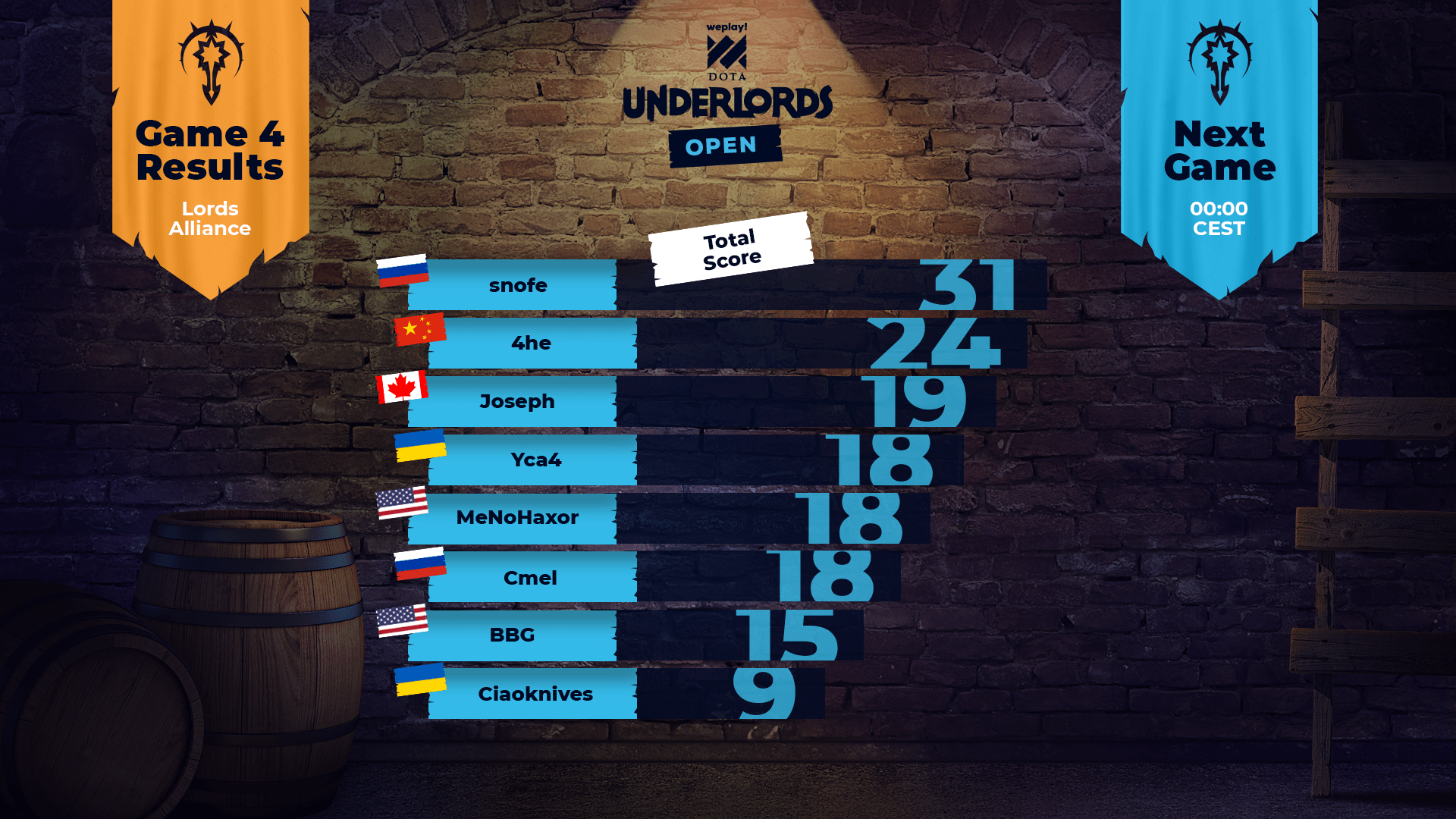 Snofe decided to experiment and collect Warriors with Brawny — it worked quite well in the early game. Cmel, in turn, went to the Savages. And then some kind of chaotic fight with a constant change of players in the top four happenned, only Yca4's position remained unshakable — 1st place with the 10-4 statistics. Snofe was in the last place with 5 HP and shared this unpleasant position with BBG. But then Cmel with BBG were the first to eliminate, followed by Snofe and MeNoHaxor. Joseph managed to roll the third level Luna, but even three Lunas wouldn't help either against Yca4 with 10 heroes on the board — he ranks Top-1 in the first and last map of the game day.

The final results of the third day as follows: 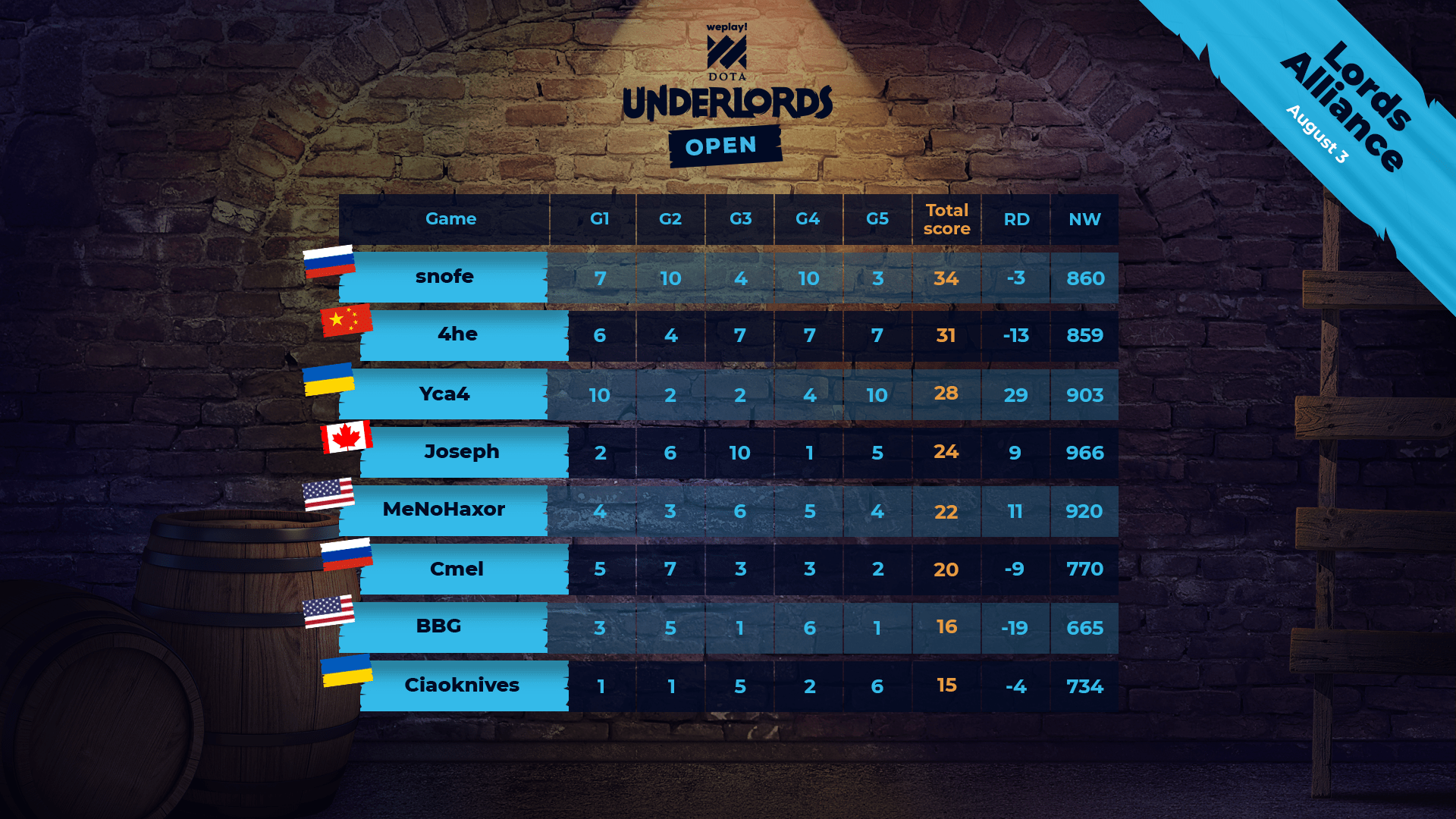