The playoff stage of WePlay! Dota Underlords Open has begun! The first part of the Gameday started with Vicious Order determining who's the strongest. Then, we are expecting Crimson Gang to show themselves.

Nuts of the Demons © SUNSfan

Rist has chosen a risky "losing-to-win" strategy... and lost 12 games in a row. Comebacking with 14 HP in the 18th round? Easy, provided that he won't lose anymore. A quick money spending, getting 8 levelled heroes, collecting as many as seven alliances on the board and — 6 consecutive wins! The seventh round lowers his health to 4, the eighth knocks him out. Ouch! Rist ends his first game 4th, snote, Yca4 are Cmel still on.

By round 33, Yca4 has gathered four third-level heroes and ends the game with one hit.

Formally, the winners of the first game are Yca4, snote and Cmel. And the distribution of points you can see in the picture below. 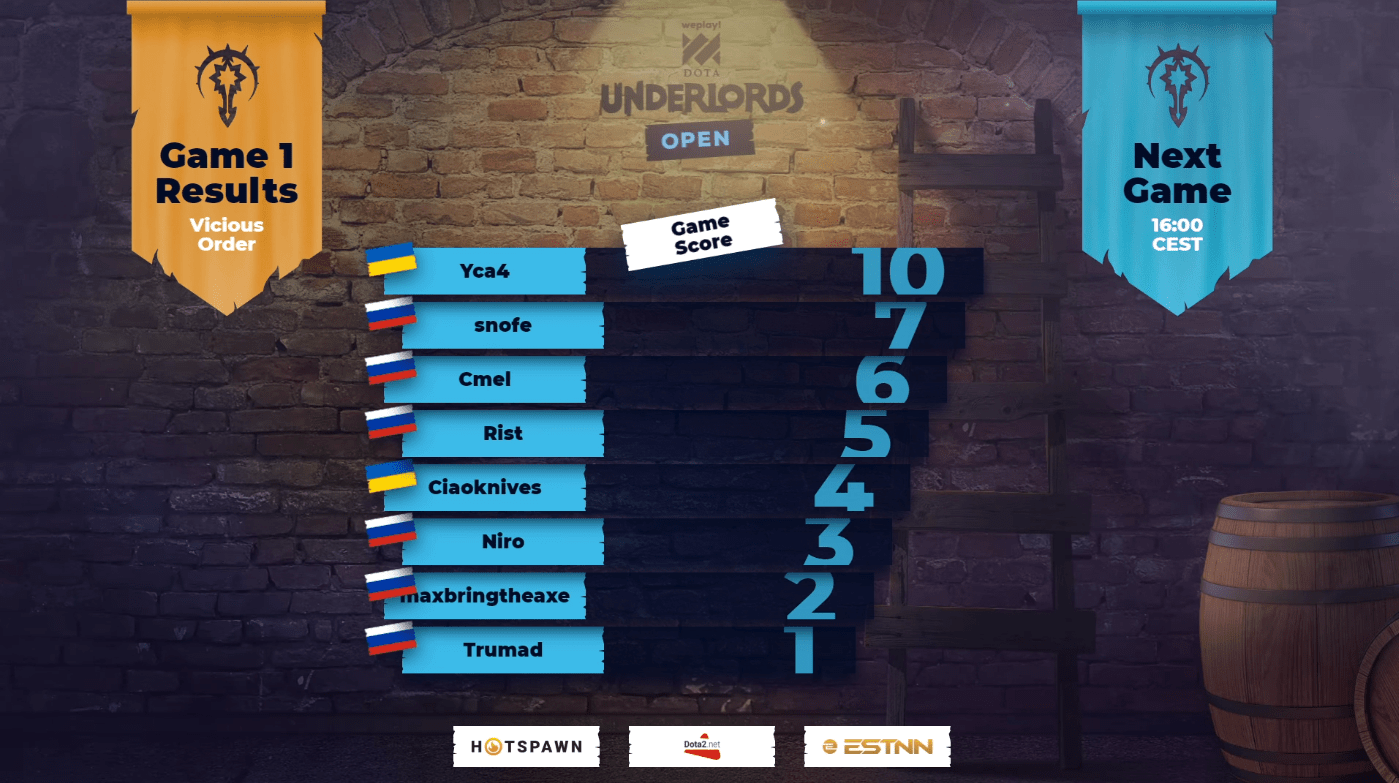 Cmel starts with Warlocks and Demon Hunters: enough to win the first 10 rounds. Not all players are so lucky at the start. By the 12th round, Yca4 has 61 HPs left and he writes “RNG hates me!” in the chat. If it’s a bluff, it’s very dangerous: the player’s health continues to decline.

Meanwhile, NiroTime has 8 HP and 60 coins in stock. Is this the time to start shopping with all the money? He tries, but the focus this time does not go well. After completely replacing his figures, he dies without a single coin in the treasury. Yca4 writes “Good Game” and leaves second.

Round 27, five players of the six left are trying to survive as hell. Cmel just has his 50 coins.

Round 32 — a freaking awesome battle! Cmel has 78 HP and fights snote with his last health point. There was no miracle, but quite a fight. Cmel grabs the win. Is that a comeback or just luck? 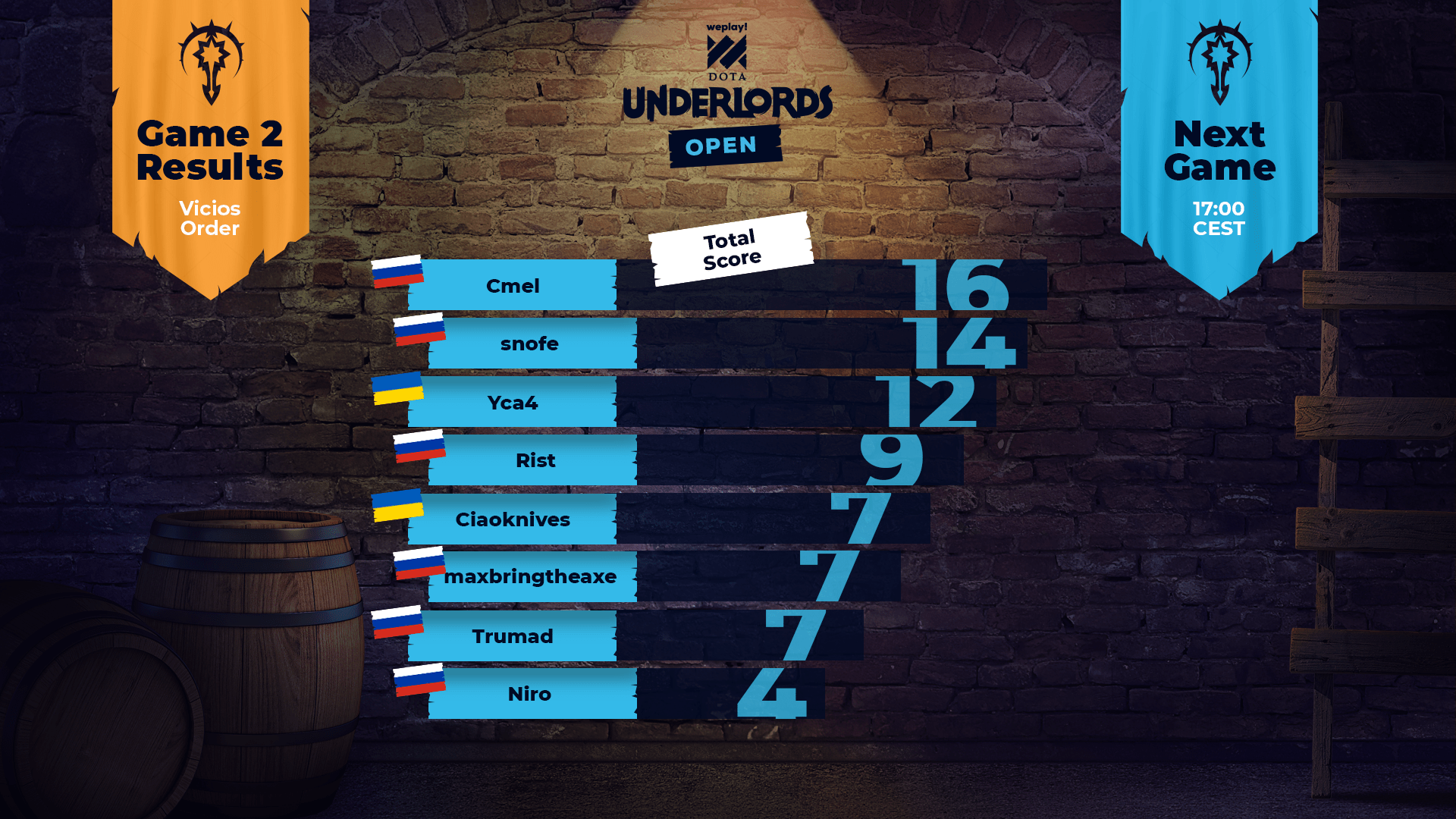 So we've got ourselves a truly competitive player. You know they say: first win is an accident, second is luck, and the third is about the skill.

In the third game, Cmel by the 15th round held 4th place with 58 HP and an excellent supply of 57 coins, which will bring a steady income. A table of 6 figures of three alliances will not let you drop even with a couple of unsuccessful rounds.

This match was quite equal: all participants fought pretty smoothly. It took 18 rounds (we love to summarize the intermediate results with this figure), no player lost more than 30 HP. However, after 4 rounds, the picture changed and the three players claiming victory were clearly defined: NitroTime, Trumad and snofe.

It was round 34 for them to be let alone and decide who's the most powerful. 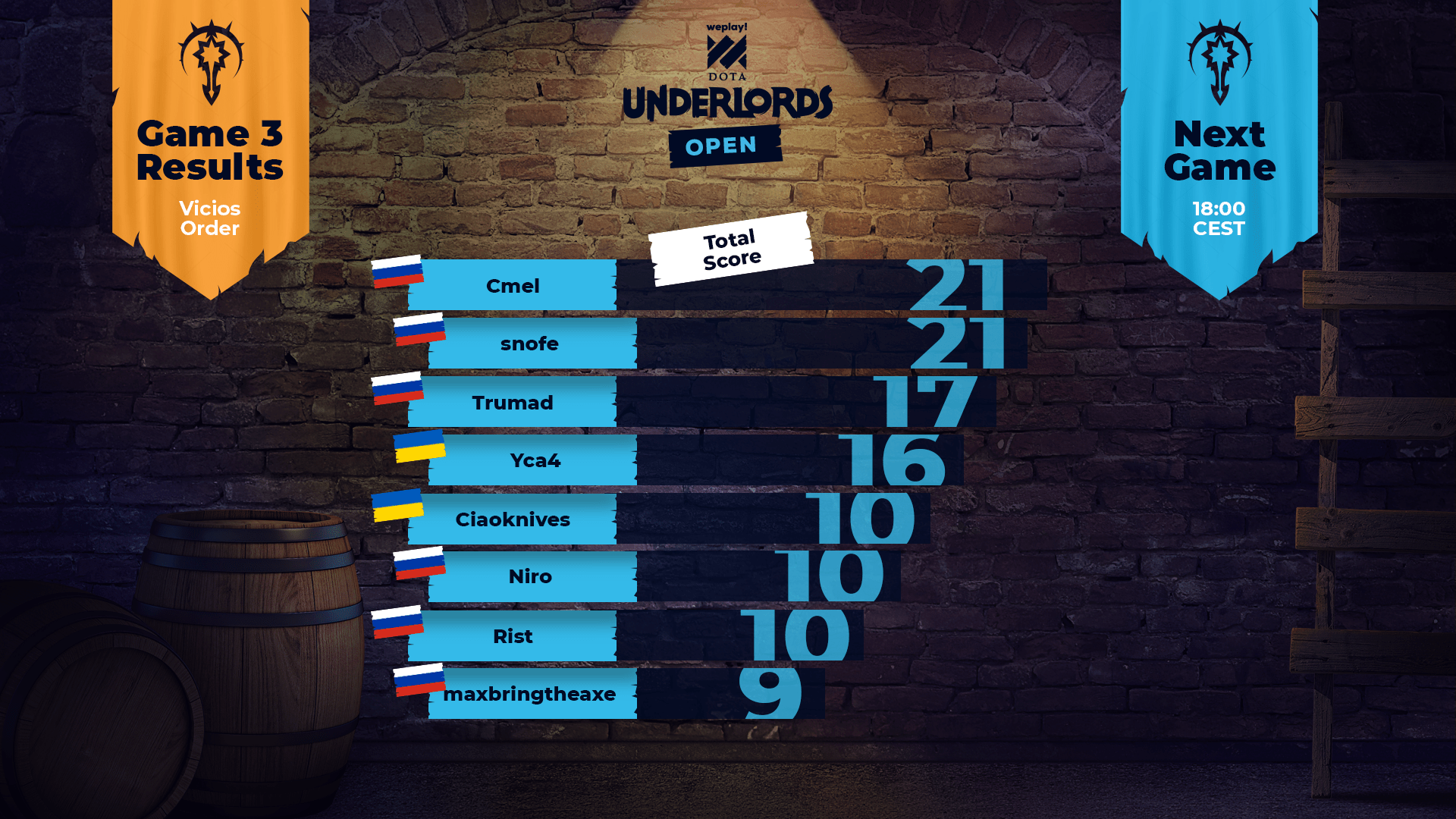 Just kidding, here it is:

Equal game? Forget what we said. In the fourth game, everyone loses. And by the 20th round, only maxbringtheaxe could keep a series of victories. Yca4 began his return with 21 HP after a series of 8 losses... and after 3 rounds he was the first to leave the match: this stock was not enough. NiroTime followed him and confirmed the theory.

Now it's Cmel’s turn: 20 HP again, but 9 slots at the 26th round (the rest of the players have 8) and 3 almost completed alliances. Still, he's got strength only for 3 rounds after, getting knocked out of the game eventually. In this meta, catching a series of defeats is disadvantageous: proved by our players.

The last in the match were Ciaoknives, snofe and Rist. It is in that order that they finish the game in round 37, after an epic confrontation in the last four. 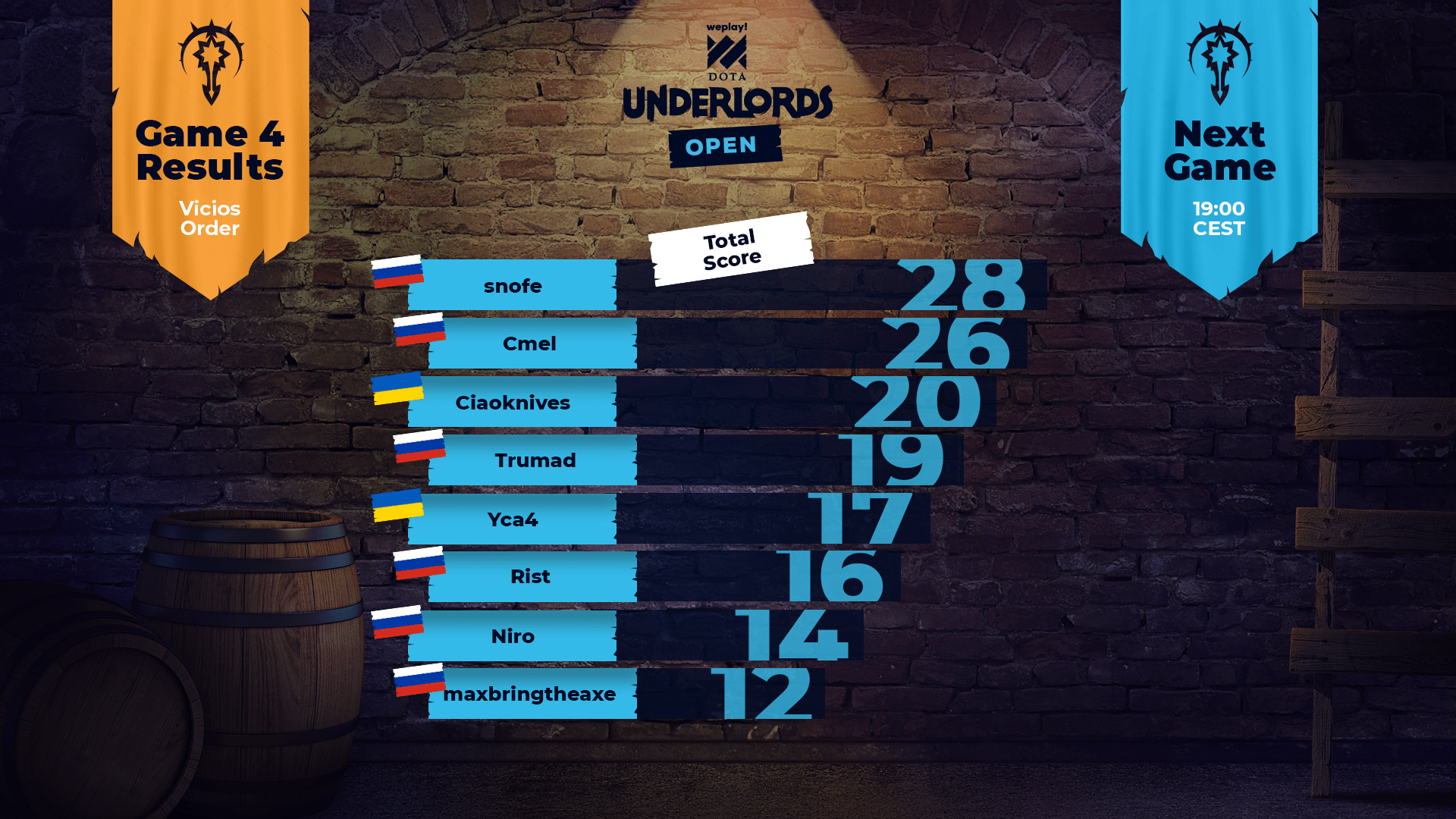 In his first two rounds, NiroTime gets two Hunter’s Focus and tries to form an alliance of Hunters. He's lucky, he finds three of them. Meanwhile, round 21 is approaching, Yca4 holds a series of 6 wins and has 6 alliance bonuses from his seven units. A wonderful army, a stable economy — who would have thought that NiroTime with his crazy plan will survive 30 rounds and is doing great!?

5 players are in, and NiroTime only needed to get into the top 3. And he successfully does it, remaining with 1 HP by the 32nd round. Another victory, he knocks out maxbringtheaxe... But luck turns him down, and snofe knocks him out in the next round. 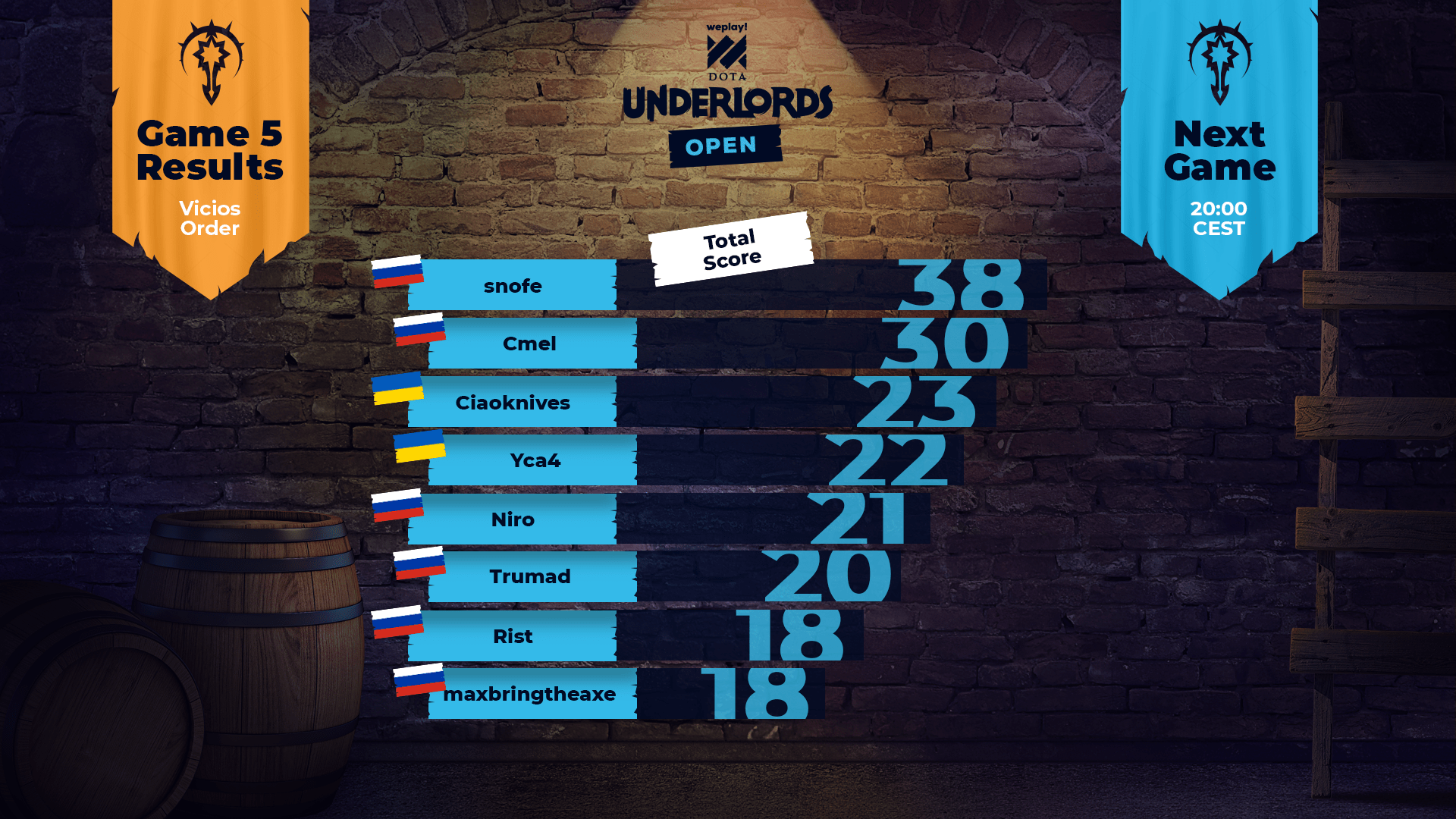 The final table of WePlay! Dota Underlords Open Vicious Order Day One Playoffs looks like this: 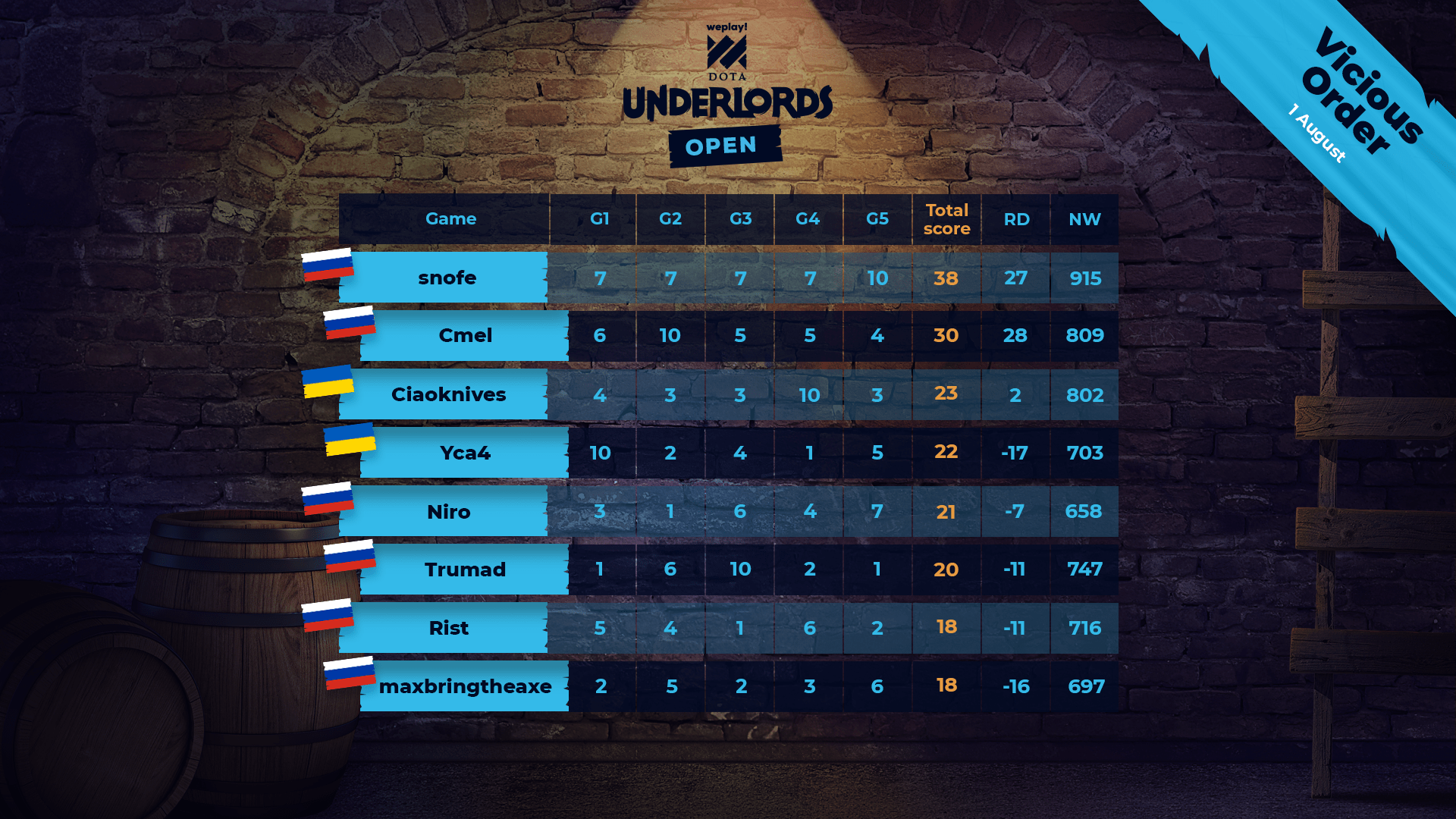 We will consider this the first full-fledged matchday of the European division (oh, that is, the Vicious Order gang).

snofe, who regularly ranked second in almost every game, ended up being the most stable player. A series of coincidences or a skill? We are leaning towards second, and snofe will still have the opportunity to show his skills in playing Dota Underlords.