Here comes the second part of WePlay! Dota Underlords Open Playoffs Day One! It's Crimson Gang's time to show off their skills. Right after Vicious Order have finished their rough-and-tumble.

This post is getting updates as today's tournament continues. Stay tuned!

Unlike the first half of the gameday, Crimson Gang can boast a few notable persons playing for them and the pack is multinational as well: there are representatives from Canada, Poland, USA, Ukraine, China and Thailand. Fibonacci is a great scientist, um, Hearthstone player. MeNoHaxor was playing competitive League of Legends.

Knights, Trolls and Heartless are tactics that won't fail you. Up to midgame, until ZabeyYaka has had his Savages and Warlocks. Well, Fibonacci almost got dropped out first at the 24th round. It was just luck that Joseph and Ratt lost more HP and Fibonacci hadn't lost it at all as he has had 2 points at that moment. Well, he didn't last long though. [F]umeche and ZabeyYaka were feeling very comfortable, gaining gold and saving HPs. They had the gap of 30+ hit points at the 27th round. So it was just a question who will take the third place, BBG, MeNoHaxor or 4he.

All in all, 4he made it into top-3 crushing ZabeyYaka in his last round, which helped [F]umeche a lot to take the first place. He had 70 HP in the end. 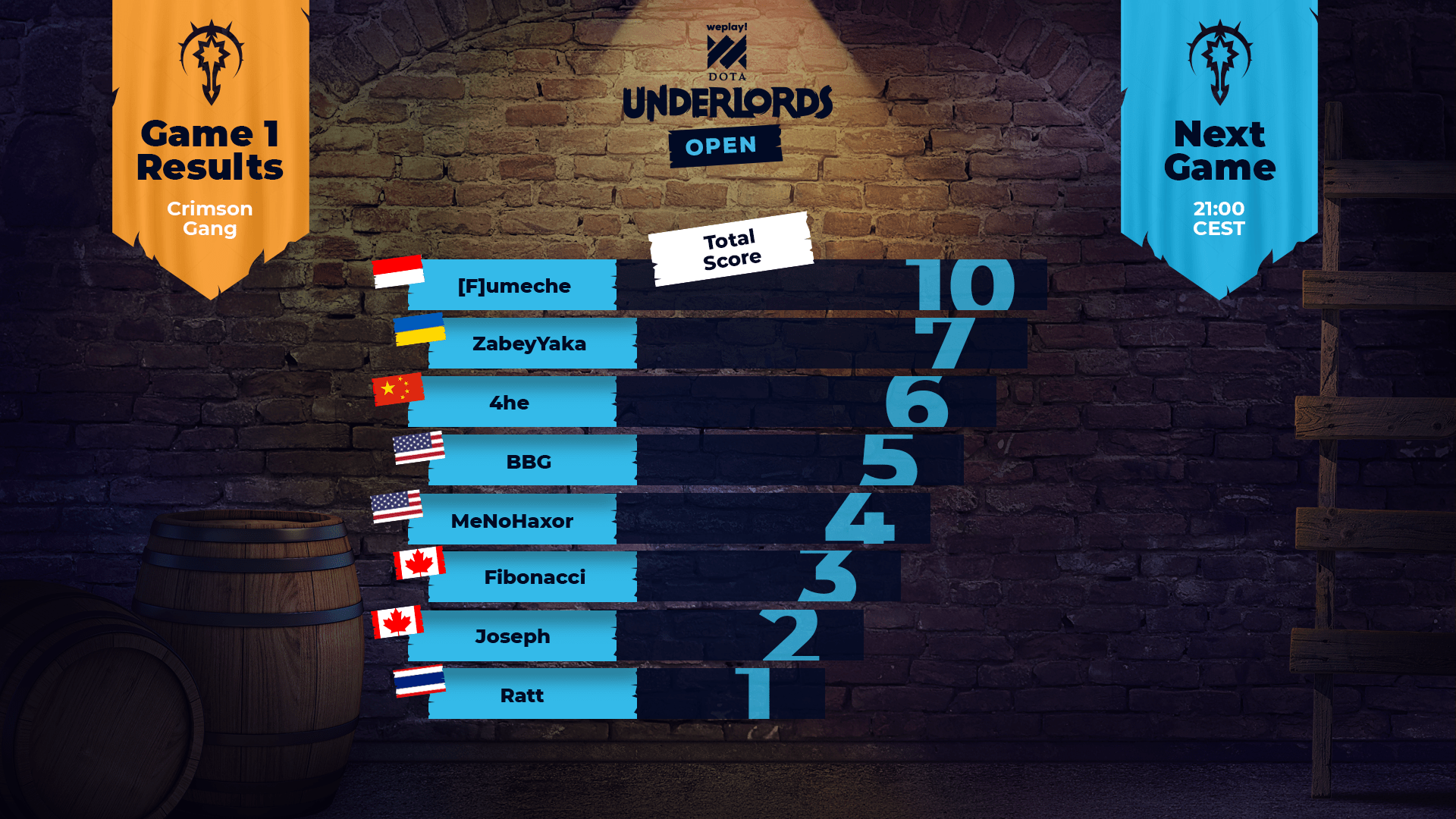 BBG had huge problems from the very start. He couldn't find any synergies and suffered a lot, dropping out at the 18th round. Fibonacci and Joseph repeated the story of [F]umeche and ZabeyYaka — totally dominating the game and having +30 HPs gap from the third place.

These two games were more about who gets kicked out the last, not who gets into top-3. 4he, [F]umeche, MeNoHaxor and Ratt were doing their best, but all in all, in quite a fascinating battle, MeNoHaxor makes it to top-3. In the next round, he's annihilated and it was all about Joseph and Fibonacci.

Tough battle, shocking mind games. And the winner is Joseph, turning the game upside down. 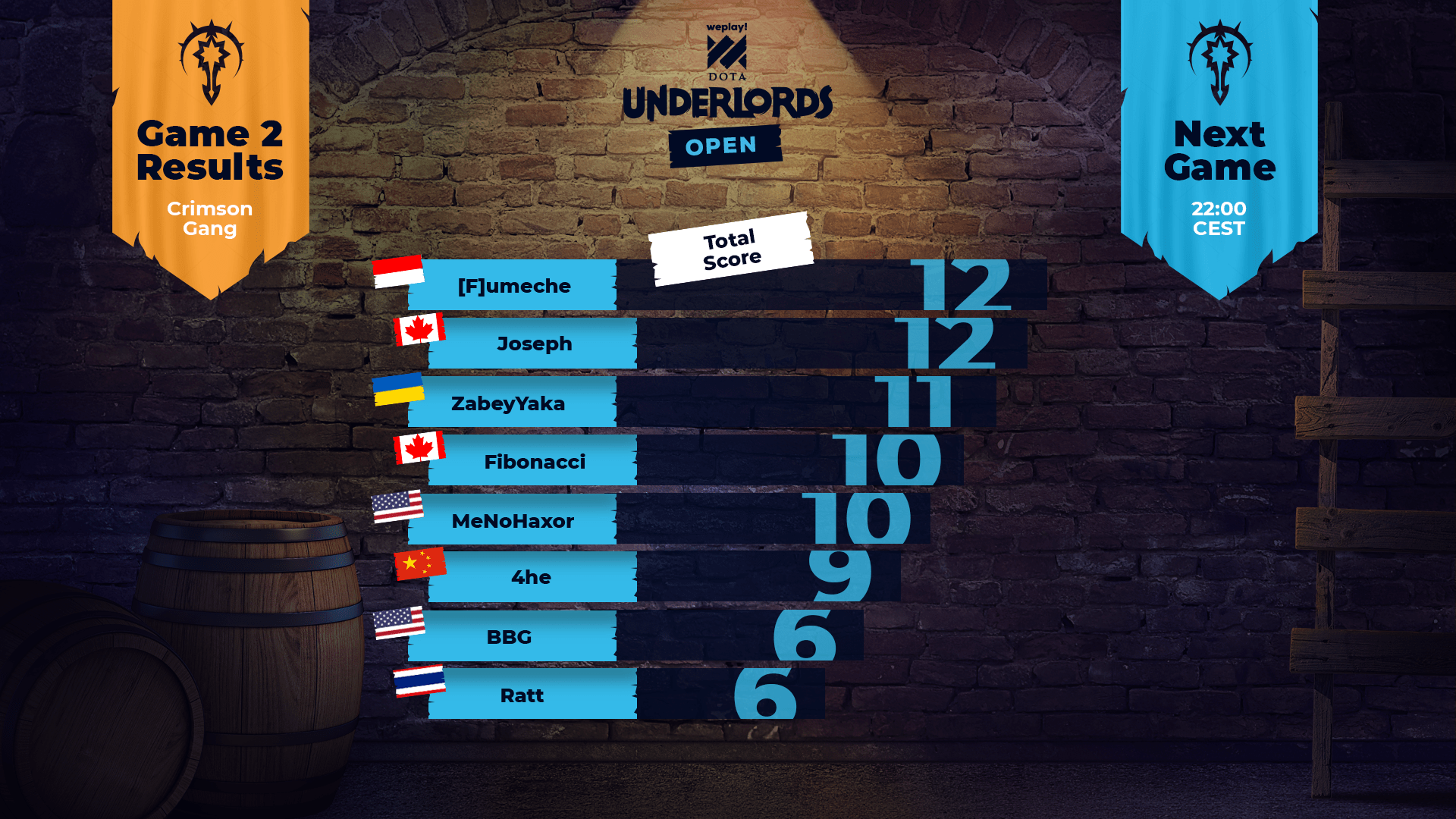 But who wants the results when you've got this?

Fibonacci is the only player doing well. Looks like this guy might compete for the overall top place. Speaking of the others... everyone's very shaky. [F]umeche started the game well but got torn apart alongside 4he in the 23rd round. Ratt and BBG were at the top of the ranking list in the mid-game. Joseph has had a "taking damage to farm" strategy which eventually helped.

But the last four players had a fantastic battle in the end. Starting from 30th round, Ratt, BBG, Fibonacci and Joseph showed us the game of stars. At Round 33, they had 8 point difference between 1st and 4th places. Risk it or stand it.

And then it turns BBG with 8 HP vs Fibonacci with 4 HP in a late, late game. Can you believe it? Wonderful sport. And then, Aegis wins the game for Fibonacci. 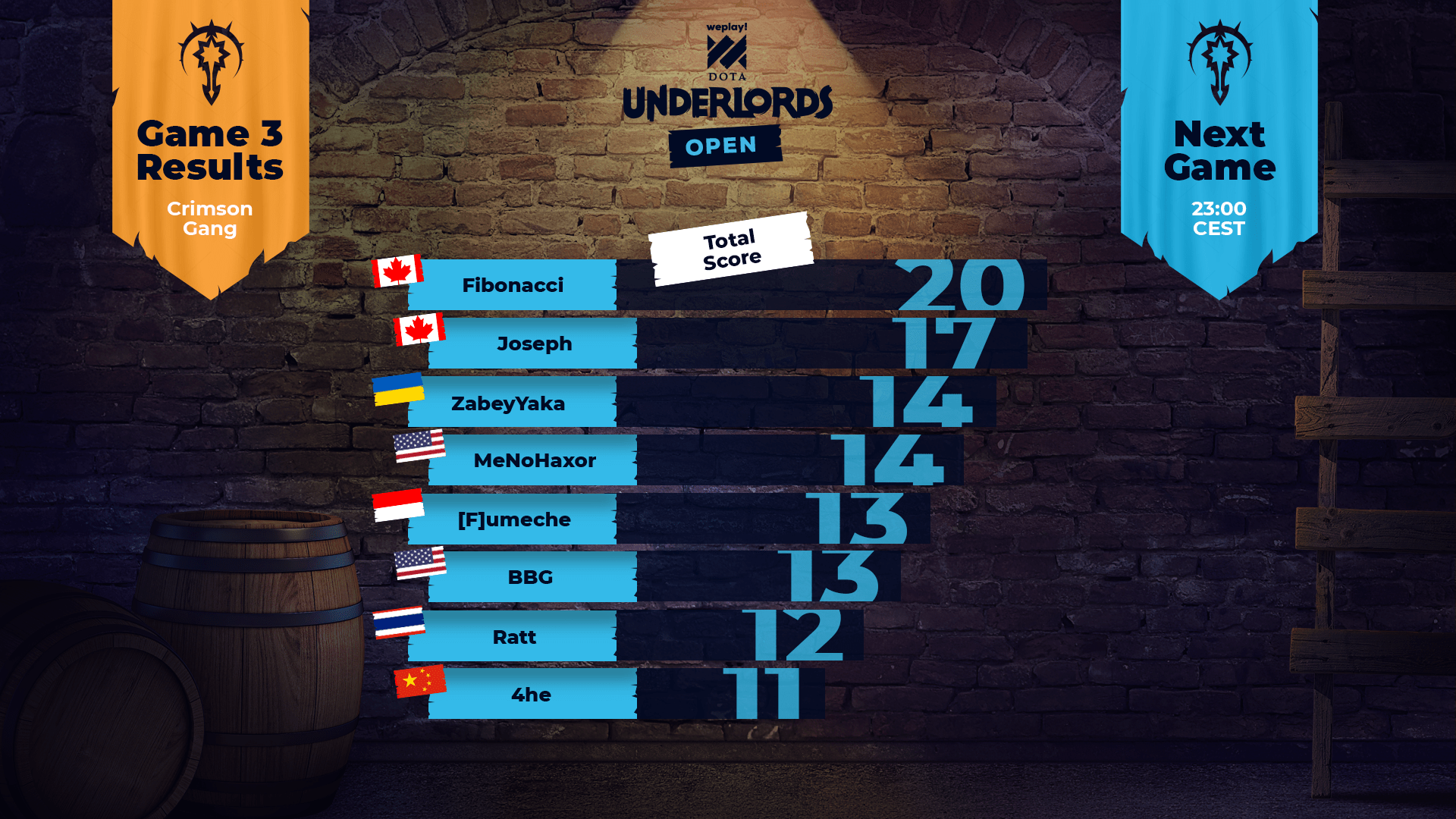 The fourth game's events rushed at a crazy speed: in the 5th round, two players already had a pair of level 2 heroes both. The leaders were 4he with assassins, ZabeyYaka with scrappers and BBG with knights. Joseph's and Ratt's play didn't work out at all. By Round 25, ZabeyYaka broke into first place, and the leader of the table — Fibonacci — dropped to the eighth. 4he survived to round 30 mostly thanks to Slark 3 level (damn, how good he is) and continued with 5 health points. But ZabeyYaka was unable to find a single hero of the third level and began losing gradually, following 4he out of the game. The precious top spots were played by [F]umeche and BBG with their knights. Both players successfully defended their boards four times in a row, however, [F]umeche still managed to uptake the last assassin to level 2 and squeeze the opponent, bravo! 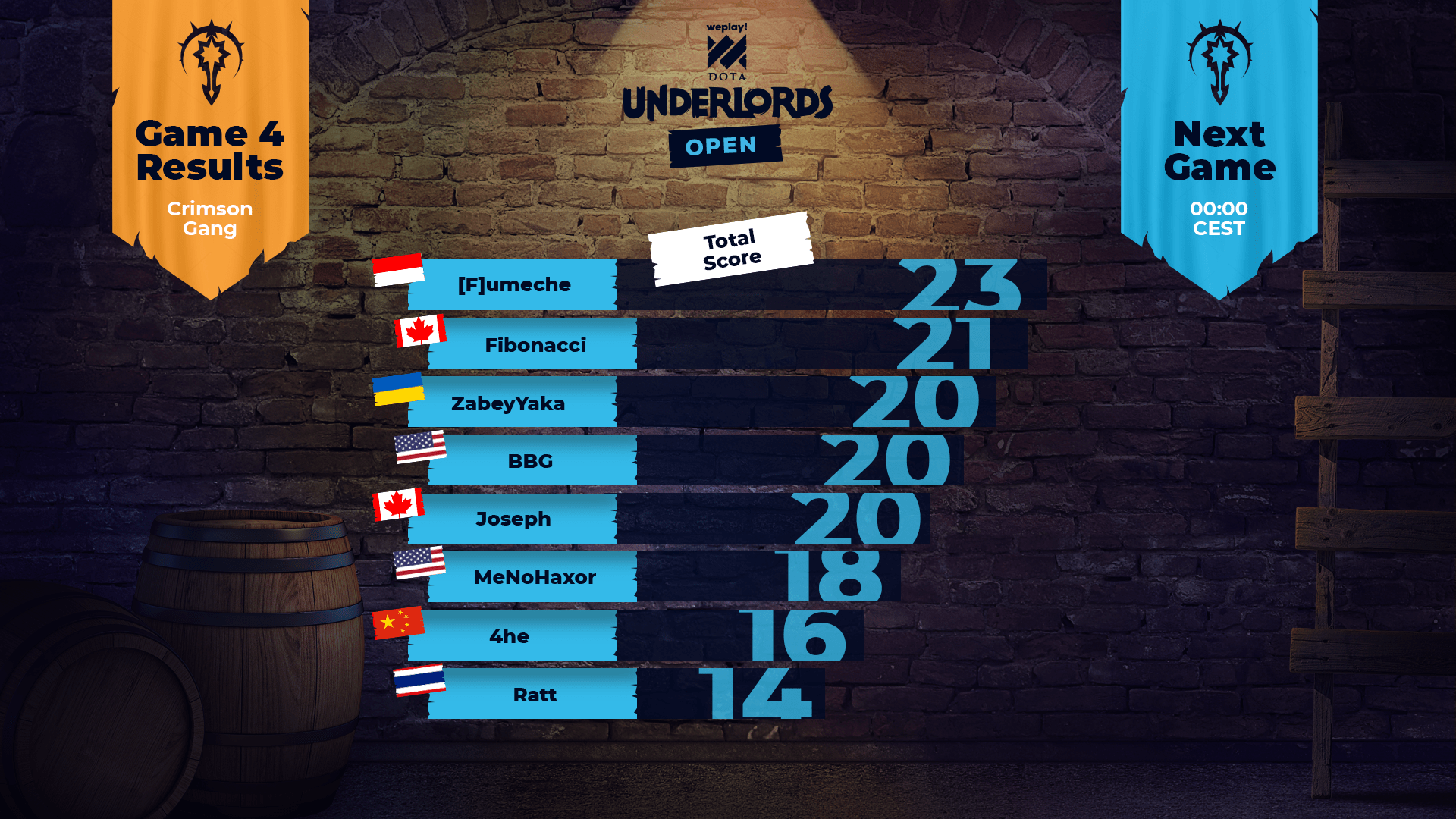 In the fifth game, the table leaders ZabeyYaka and Fibonacci began to suffer in the first place. MeNoHaxor was on a good win streak, but you rarely win games on Round  21. BBG performed well with the druids and warlocks on the board, ZabeyYaka and his demon hunters were great, until he ran into the dense wall of knights and immediately took 13 damage. The first one to be kicked from the board was Ratt, but there were four players at once in dangerous proximity to the defeat, but in the top three, the fight was just beginning. BGG put together a chic board of savages and warlocks, Fibonacci decided to have a risky combination of shamans, and MeNoHaxor made a bet on demon hunters. The latter seized first place in the end. 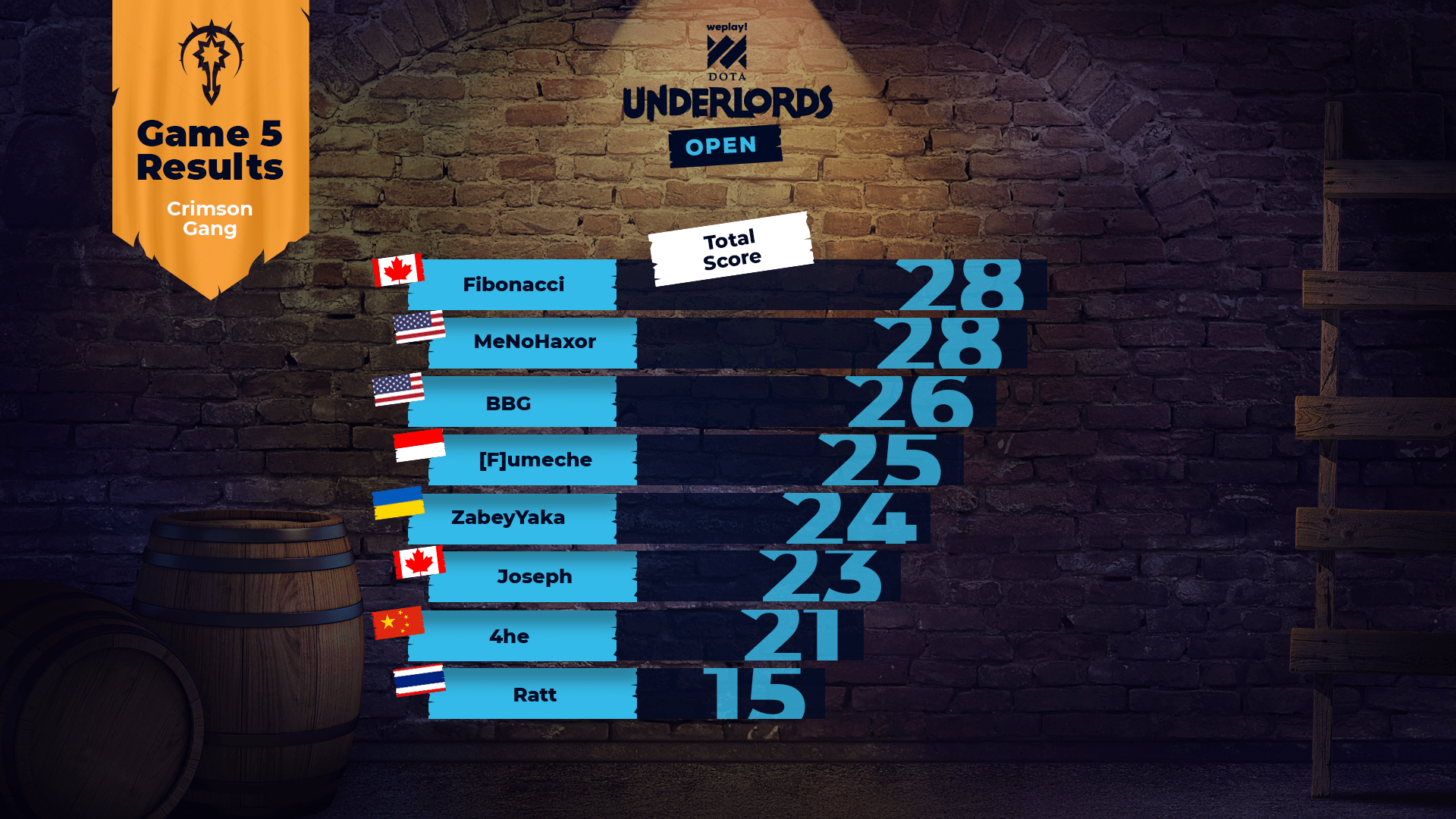 This is how the table of North American aka Crimson Gang part looks like: 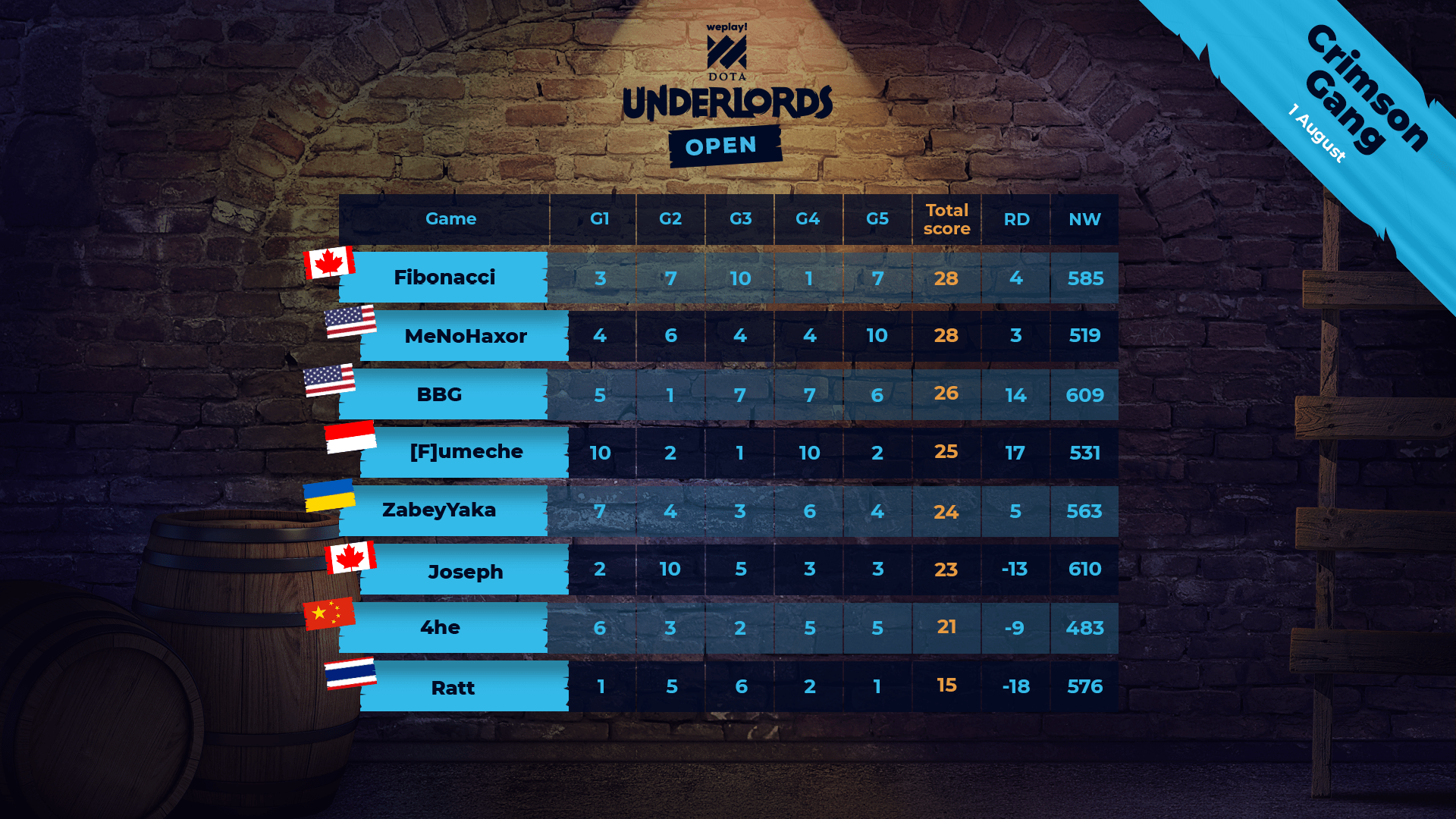 Tomorrow we'll meet again on the streets of the city to decide the eight participants of WePlay! Dota Underlords Open Cross-Group finalist! Here's the schedule: 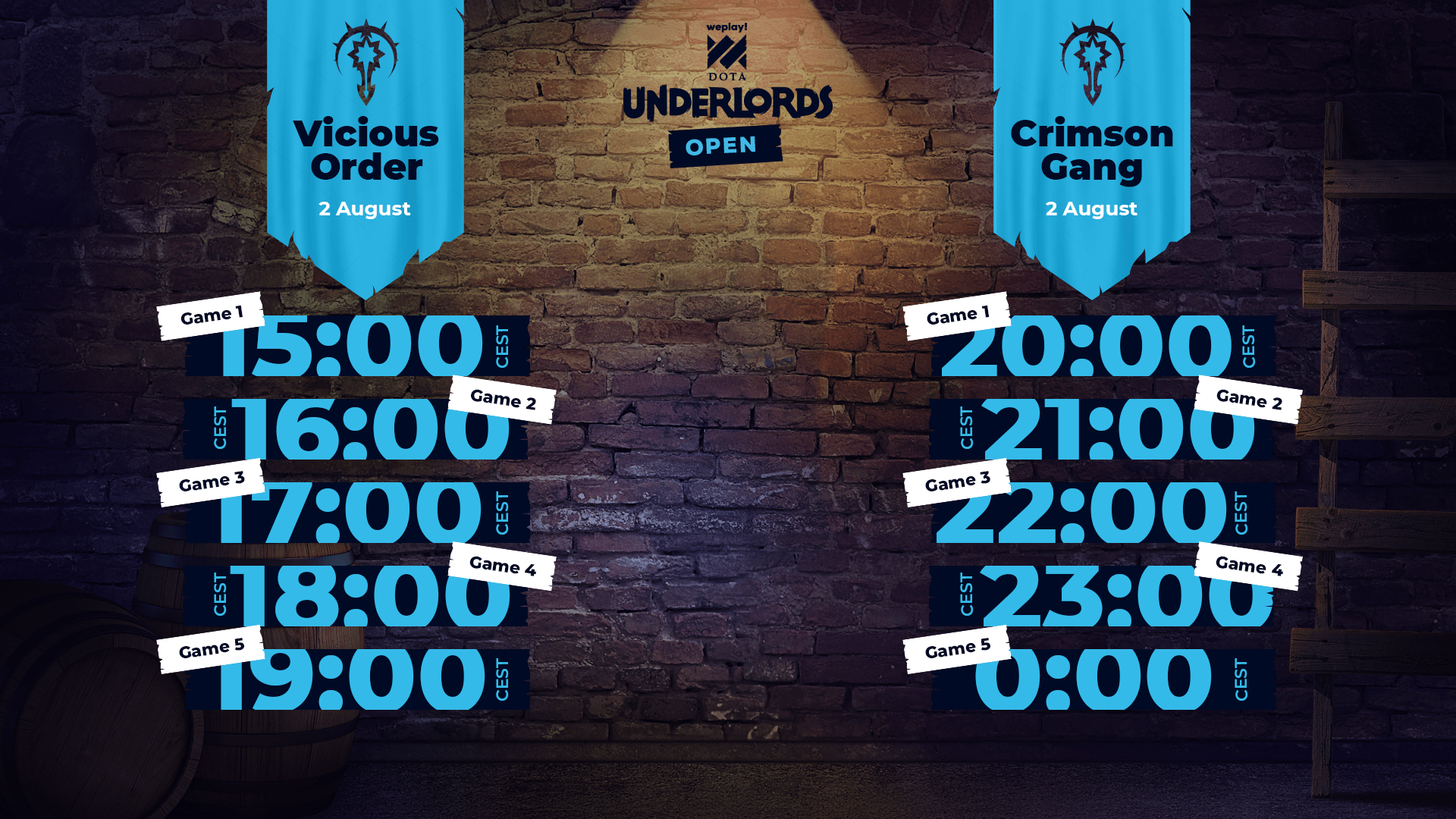