There are many amazing weapons in Destiny 2 which make the overall experience from the game truly awesome. One of the best types of weapons that are available are swords. Of course, not all of them are that special but there are some which can definitely change the balance of power in fights in a split of a second.

Unlike all other weapon types available, Swords are a pure melee weapon. In fact, before they were introduced, players could only use a cleaver and The Aegis Relic, which were only available in specific situations. However, unlike the swords which have a unique guard ability, these ones did not.

In order to obtain a sword, the player has to complete many quests, with the first one being "The Taken King", followed by the mission "Dread Patrol".

Swords are powerful both in a player versus player enviroment, as well as in a player versus enemy environment. Having said that, some swords are capable of killing an enemy during PVP with either one or two attacks, which makes them a very deadly weapon. In order to be able to withstand the damage, you need to stack as much resilience as possible.  What's more, carrying a shotgun or a sword of your own is also a decent way to counter your enemies.
During fights, just make sure to know your exact position and the map as a whole. If you can navigate properly, sneaking on your enemies should be like a walk in the park for you.

In terms of PvE, swords work wonders in many ways. They are easily the best weapon when it comes down to clearing large waves of mobs, dealing insane damage to majors with your special attack or just saving yourself from trouble. However, one of the biggest issues with swords is short-range. Sometimes they might feel completely ineffective but in general, they are a good addition to your other weapons.

In general, there are not that many swords for you to choose from in Destiny 2. However, some of them are definitely standing out when it comes down to PvP or PvE. It is also important to know that these statistic here are only relevant for the time being. Of course, as the game progresses and new updates come out, the information here is subject to change, so keep it in mind. 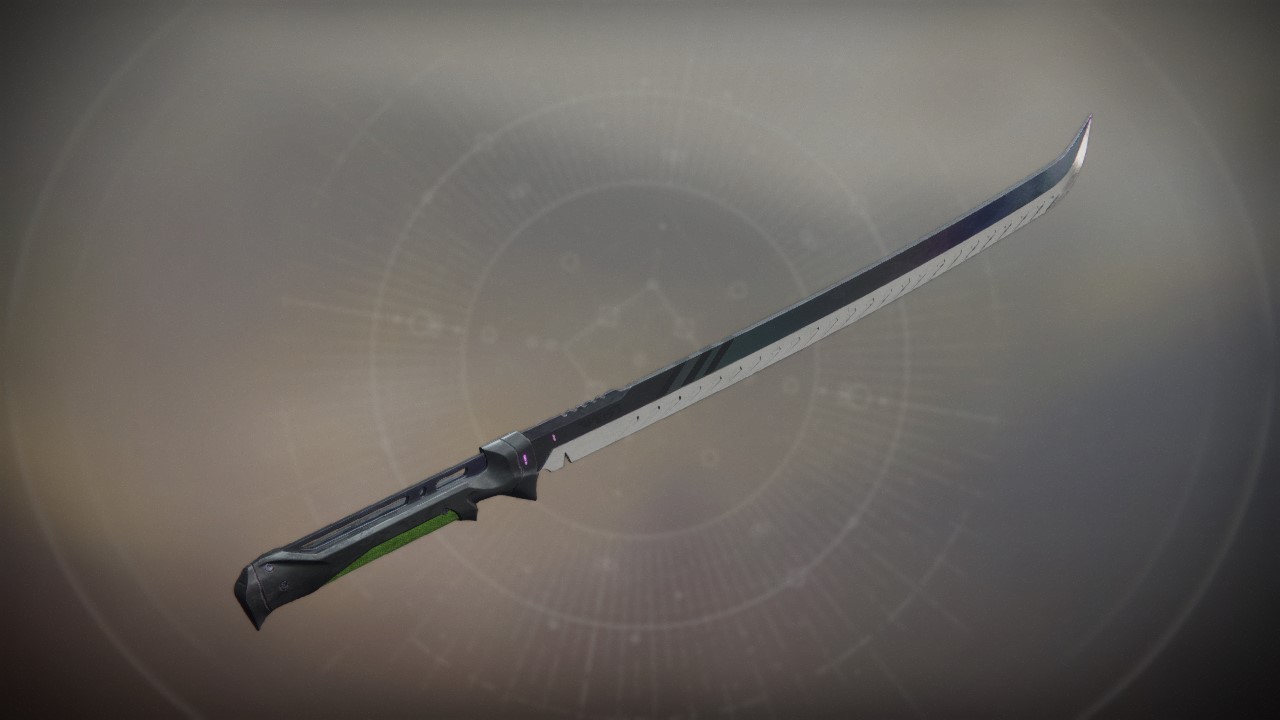 Quickfang is pretty much one of the fastest hitting swords right now, which makes it perfect for duels, especially if you also have quick fingers. In addition to that, this item also has outstanding handling and higher attack damage. However, in order to benefit from the damage buff, you need to hit immediately after the weapon has been drawn out thanks to the En Garde trait. This is excellent for some occasional surprise encounters because it also increases your movement speed, which is a huge bonus in PVP.

It is important to know that this item is currently available only to Hunters, which is kind of sad. Also, if you spam it too much, expect some flame from the other players because it is pretty annoying to play against such a weapon.

You can find this item as a campaign end reward, Gunsmith hand a random drop Legendary engrams for Hunters only.

The best sword for PvE - Crown-Splitter

The Crown-Splitter is pretty much the only aggressive paradigm sword in Destiny 2, which is exclusive to Titans. Having said that, if you have the needed patience and desire, it is definitely worth the chase because it is very fun to play with. Apart from having an insane amount of damage output, this sword also very efficient in terms of ammo. Basically, you get ammo back for every singe kill you do thanks to the Tireless Blade. What's more, it is very easy to quickly kill down an enemy with your R1/RB strikes and don't lose any ammo. How cool is that?
Not only does this item make you more efficient, but it also gives you the chance to use the ammo on bosses or just shield yourself when needed. Definitely one of the best effects in Destiny 2.

This sword is found at the very end of the campaign where you get is as a reward. There is also one alternative to it - Complex solution. It is easier to get and it also has a Tireless Balde. However, it is way less powerful.

It Stared Back - the best sword for uppercut ammo

One of the best all-around swords is Stared Back because it has the Relentless Strikes trait. This trait basically allows you to refill ammo after three quick hits, which is absolutely amazing. What's more, if you use your uppercut move triggered by R2/RT, it will count as three hits should it land properly. Also, you can use this ability even if you have only one ammo left, despite the fact that it costs three to perform. This is amazing both for PvP and PvE, even though the PvE usage seems to be more.

Also, let's not forget the fact that this sword also has a Whirlwind Blade, which means that the third strike of the uppercut does more damage.

You can find this weapon in the Leviathan Raid engrams. However, if you think that it is too hard, you can use the Unspoken promise. It has relentless strikes and it's way easier to get. However, it does not have the Whirlwind Blade ability, which is definitely worth having, especially against stronger enemies.