Cyberpunk 2077 romance has more depth and variety than The Witcher 3 ⚡⚡⚡ Esports and gaming news, analytics, reviews on WePlay! The latest news on WePlay!

Cyberpunk 2077 is all about the freedom to choose. From body modification to character creation and the absence of a morality system, players will be free to play as they like. This freedom extends to romantic relationships as well.

In what looks like a private Twitter conversation, Lead Quest Designer Paweł Saskos speaks with a Redditor named magired1234 about the game's romance options. He explains how similar it is to The Witcher 3 where there were whole romantic plot lines to unlock and pursue, depending on how the player treated certain characters. Similar but expanded upon.

“And of course, players will have way more options than only Heterosexual, as it was in The Witcher 3 (as Geralt was a defined character that was only interested in females)", he says. “Here you can define what type of interactions your character prefers and have a relationship with the NPC/NPCs.” 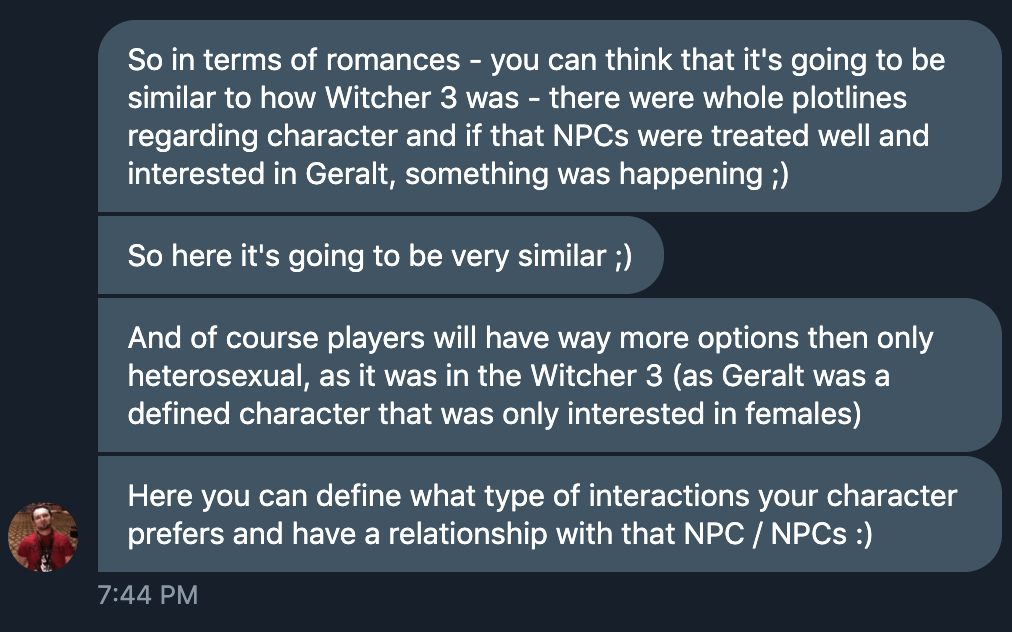 From his words we can assume the game will allow long or short term relationships with same-sex partners or multiple partners if we choose. How many NPCs we will be able to start romantic relationships with might not be revealed till after we get our hands on the game, but discovering who we can and can't be with should be loads of fun too. Will we be able to find true love for our Cyberpunk avatars in Night City?