Artifact: What is it and how does it work?

Artifact: What is it and how does it work? ⚡⚡⚡ Esports and gaming news, analytics, reviews on WePlay! The latest news on WePlay!

Artifact is an upcoming digital TCG set in the DOTA universe. Launching on the 28th of November, the game is the brainchild of Valve and Richard Garfield, the creator of the iconic trading card game Magic: The Gathering. With the product’s release just around the corner, we take a look at Artifact’s history, the lore behind the game, as well as the gameplay mechanics, which offer a unique twist on the idea of a digital card game.

Initially announced at DOTA 2’s The International 2017, Artifact is Valve’s attempt to expand into the digital TCG market, combining certain elements of the generic archetype of MOBA games to offer a fresh take on what has become a rather stale genre. After the card game boom that followed the release of Hearthstone in March 2014, various video game developers jumped on the bandwagon to try and get a slice of the action, ultimately failing to make as big a splash as Blizzard. Especially The Elder Scrolls: Legends and Gwent come to mind. A lack of innovation ultimately spelled their doom, despite being well-established franchises under the bonnet. Valve seem quite confident about their chances of leaving a mark on the TCG scene. And for good reason.

The think tank behind Artifact includes Richard Garfield, the creator of Magic: The Gathering. As possibly the most influential trading card game of all time, certain aspects of MTG can certainly be seen in Valve’s approach not only to the gameplay of Artifact, but also the business model behind the game. Now, with the introduction out of the way, onto the proper substance:

The board is split into three lanes, each treated as a somewhat separate battlefield. The win condition is quite straightforward - defeat your opponent’s towers in two of the three lanes, or push through one lane twice, and you’ve won. Each player will have to use decks consisting of 40 cards of various colours: red, black, green, and blue. Having selected the five heroes a player wishes to have in their deck, as well as the remaining cards, they will be prompted to put at least 9 item cards into the deck. Those will become available via the in-game shop during the course of a game.

Each player has three heroes placed randomly on the board (one hero on each lane) as soon as the match starts. The fourth hero arrives on turn two, followed by each player’s fifth hero a turn later. The order, in which heroes are put into play, is set during the deckbuilding process.

Either player starts with three melee creeps, randomly scattered around the game board. A player’s starting hand consists of five cards, and both players have access to three mana on the first turn. Note that each lane has its own separate mana pool that increases by one on every turn.

One crucial aspect of the game is that cards are colour-locked. That means if a player wishes to play a spell in a given lane, a hero of the same colour has to be present in that particular part of the battlefield. To play a red card in the first lane, a red hero is required in said lane. To play a black card in lane three, a black hero has to be currently residing in lane number three (and so on).

The player with the initiative starts the action phase. They can either choose to play a card and pass the initiative to the opponent, or do nothing and likewise let the other player cast spells. Once both players pass the game moves into the combat phase, where creeps and heroes are pitted against one another. After that, both players are given the option to purchase item cards from the shop using gold accrued over the course of the game (which is done by killing enemy creeps (1 gold) and heroes (5 gold). Those items are split into three categories and will be randomised at the start of the game, and are either consumables (one use only) or accessories one can permanently equip their heroes with. Once that’s done, the game moves onto the second lane. Rinse and repeat.

The goal, as previously mentioned, is either to take down two enemy towers or to push through a single lane twice. A tower has 40 HP. Once a tower has fallen the opponent’s ancient gets revealed - with a hefty 80 HP on it. Take down a tower + ancient in a single lane / take down two towers in separate lanes and the game is yours. 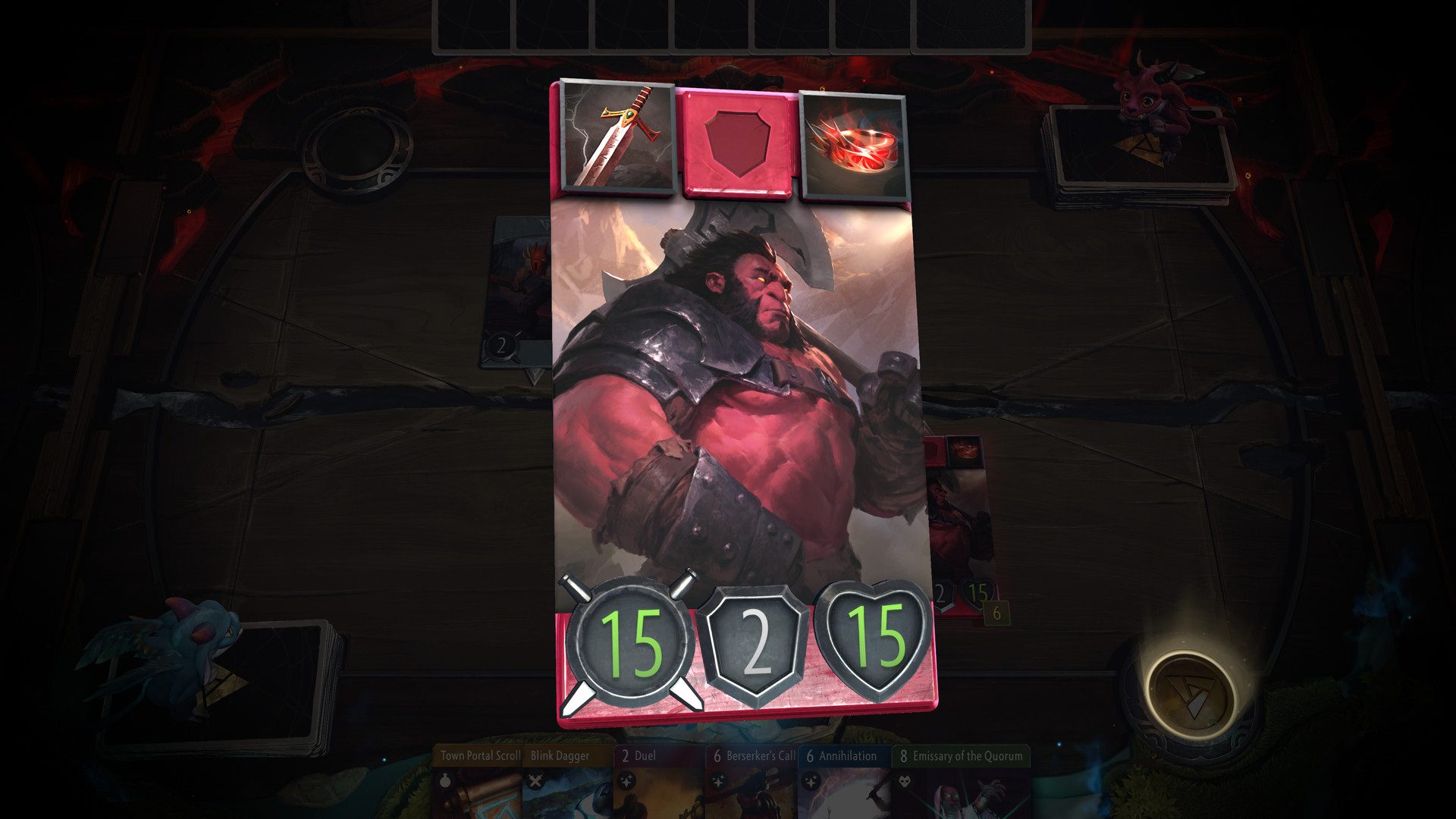 Valve’s decision not to release Artifact as a free-to-play title might seem quite baffling in the current day and age (since its primary focus as an esport). The game will ship for $19.99, with 280 cards upon launch. Additional packs will be purchasable for money. What is worth mentioning is that there is no in-game currency; no way to grind for card packs, no way to craft desired items. Valve are, however, revamping the Steam Marketplace to promote the trading aspect of the digital TCG - users will be able to trade cards, giving them real monetary value.
Artifact also gives the development team to further expand the lore of DOTA. The initial set of cards will be focusing on the Vhoul Rebellion, putting characters such as Legion Commander and Sorla Khan in the spotlight. For the time being not much is known about the direction the team will take Artifact in (lore-wise, of course)